Andriy Vinchkovskiy and Pavel Lagutin figure that these days Bill Murray is too busy making cameos to deal with slime, so these days people are gonna need someone new to call when they've got a ghost problem. Popping Ghosts is a physics-based match-3 game about gems, ghouls, and questionable exorcisms. You're a spunky, sword-wielding, motorcycle riding chick with a chained ghost because it's rad that's why. The gameplay itself is fairly simple. Stab three or more chained ghosts of the same colour to remove them from the field, and give you a little more time on the clock. Connected ghosts will be linked by a line so they're easy to spot, and while you can remove single ghosts if you wish, you'll take a small penalty. Popped ghosts become gems which can be filtered down to the bottom of the screen, and once you've gathered a certain amount, your surly spectral assistant will appear and clear a portion of the board for you. The conditions for victory vary from stage to stage, but the ticking clock rarely does. Some stages have special ghosts, such as those locked in cages that need to be destroyed by multiple bomb detonations, icy ghosts who will sneakily spread their freeze to others around them, and more. Ghosts may be jerks, but they are versatile. 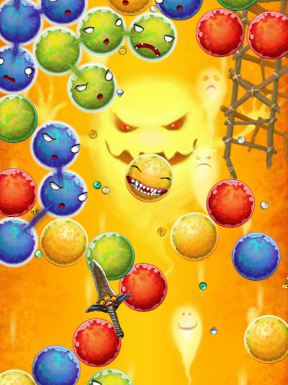 All of this is about what you'd expect for your typical match-3 arcade game, but where the physics come in is where Popping Ghosts adds a bit of extra challenge. The ghosts fall and roll like actual balls around the screen, and with some stages incorporating water, physical obstacles, or even a continual waterfall of ghosts, making matches is harder than in a game where everything is stationary. The physics wind up working both for and against the game, since they provide a lot of interesting challenge and variety, but waiting for ghosts to settle and connect feels fiddly, especially since those connections can be broken by being jostled just a hair too far apart. Survival mode lets you play as long as you can last, and Zen mode allows you to play any level you've already unlocked without that pesky timer. Though you can play the entire game without it, if you connect through Facebook (thankfully there are no notifications or ads or ask for any payment whatsoever) you can participate in online high-score rankings.

All of this makes for a match-3 game more chaotic than most, and yet if you like a little action, it works. Who knew combining a ball pit with ghost busting was a thing? It's a colourful, cheeky little game that combines simple gameplay with just enough new mechanics introduced throughout to keep you on your toes without demanding a lot in return. It doesn't exactly do anything new, but it's the sort of casually engaging "one more level" arcade game that will fill up a break, the time between emails, or, uh, when you're supposed to be writing reviews. Its physics will make it an acquired taste for some, but Popping Ghosts is still a vibrant and addictive little arcade game that's a great fit for spare time.

Even with the quality turned down this game has terrible refresh rates. It's so bad as to be unplayable.

I'm sorry you're having problems, Vaxjo Aberg. :( I experienced no issues whatsoever with the game on maximum quality. I use Firefox with Flash fully updated.

using chrome, fully updated, this game wont even load for me.

using Opera, it gets to 96%, then starts throwing security warnings, and trying to log into/send unencrypted passwords to facebook.

I find unfair to rate a game 0/10 without knowing the developers have spent ten months working on it. It's not like you paid for it, this game is totally free without ads and without micro-payments inside.
I tested it using all the browsers (Ie, Opera, Firefox, Chrome, Safari) and it works fine for me. The game uses ssl connection so maybe it's for that you meet problems with it maybe because your browser settings but one more time, this game has been tested by 100 persons and we never met a problem.

It's a nice game, has interesting features. I'm not big on timed games however though I did notice the Zen mode.

No loading issues here (using Chrome on a not-so-special laptop).

My problems with the games are 1) Cup awards at the end of the round. What differentiates the type of cup you receive? this is not apparent, but maybe it makes no difference. Can't tell. 2)Some of the missions are unclear. I suspect this is just a translation problem, but there could be better ways to communicate the actual goal. For example "Call 3 Grumpy Ghost", could be better stated: "Clear the gem board three times". I suppose this was covered in the tutorial, but I did not find the tutorial particularly effective. 3) "Story mode" doesn't really have much of a story. It is just a progression with different missions and layouts and increasing difficulty.

My rating is 2/5. The instructions are unclear but it looks nice. In the end it is yet another match-3 that does not really bring much new to the table. I did not use the social connections, because the game showed no incentive to add this, nor offered any idea of how much spam it would generate in my Facebook feed.

I think the 0-star review above was absurd. If your machine can't play the game (which clearly works with standard configurations) then note it but no need to leave a poor rating. Rate the actual game itself when you get it to work. I find it equally absurd for the developer to counter that "I find unfair to rate a game 0/10 without knowing the developers have spent ten months working on it...this game has been tested by 100 persons and we never met a problem." So defensive! Why not acknowledge that some users have issues and try to find the problem?

Hi TheZeu. You raise a good point about the missions. I was actually asked several months ago if I would help with the tidying of the English translation for this game, and I felt the achievements/missions were contextually clear, though obviously I was wrong, so that onus is on me and I do apologize.

For the record, Jeff is the sponsor, not the developer. :) I don't think he intended to come across as defensive, though undoubtedly the 0 comment upset him.

Engaging game, although toward the higher levels in story mode, clicking haphazardly and very very fast usually resulted in winning the level. Great graphics and good music with lots of replay value.

Chrome and Firefox 27.0, stuck at 95%, seems to get no response from "core.mochibot.com"

I tested the game and I like it. Great graphics, nice music (not boring)and interesting gameplay.

It wont load. I even tried links from other game sites. No avail.

Hello, I'm the developer of Popping Ghosts, I have just removed mochibot code, can you please tell me if it has fixed the problem? Thanks in advance

The developer (Vinch) sent us a new version without mochibot script (which is a script to know the number of plays) and without all the code for Facebook.
I hope this version will fix the problems including the problems during the loading and the frame rate of the game while playing.
This version is now live on JiG.

For the cups:
Gold, Silver, Bronze.
It's a question of time left. If you achieved the level with lot of time left it means you have been performant so you will have a gold cup. During a level, you will often see, the gold cup changed to silver cup but it does not mean you have already lost the gold cup. As you know, calling the ghost assistant adds time so you can use a strategy to call the ghost assistant for winning time and winning gold cup.

I think the update lost my progress, but no worries since it is running much better than it was earlier!

Question though - I see some achievements popping up, but I can't seem to find them to look up anywhere, what am I missing?

Other than that, it is all good clean match 3 ghost popping fun, without the microtransactions :) - that alone gets it a 5/5 from me.

A fresh reboot seemed to do the trick and the game now plays perfectly.

@Yaddab: look at the first menu, under 'Play game' you have 'Achievements' with all the progress medals and some other records like time played, ghosts killed etc.

The cup issue is really bizarre. I just finished the first level with :57 remaining and still managed to get a silver cup. And I didn't click on any single ghosts either. It really kills my completionism...

Yes, you're right, it seems the 'time left' is not the only criteria with the cups. I'm thinking of the combos as they bring more points. I will ask to Vinch for better explanations.

Lost my progress yesterday after 40 lvls. What error made that happen?

Devs: The slowness of the game seems to have been resolved for me with your update. Now that the game is playable, I'm enjoying it so far! :)

(Chrome browser, Windows 8, did try rebooting and clearing cache before the update if that helps.)

Hello Nathaniel,
We released a new version yesterday. Sorry for the inconvenience.
Try to use this url:
https://poppingghosts.com/
Your progress should been saved here.

Thanks Jeff, hiding in plain sight it was!

now that the mochi code has gone, the game loads, and doesnt throw security warnings. I'll test it, and review my score upwards.

Feel free please to tell us your new opinion about the game :)

A quick note about the cups:
Vinch, the developer is working on a new version (yes again!) with the system of the cups, clearer. I hope we could release this version within the next days.

We have just uploaded the latest and final version. Under the score, you have now the progress for the cups. This progress is based on the points and only the points. Try to pop the ghosts for having great combos because more you did combos of 15, 20 or 25 for instance and more you earn points.