Everyone knows the easiest solution to debt is to throw yourself in the gladiator ring. Every foe you kill is another gold piece in your pocket and your debt will shrink in no time! At least that's the solution in Alchemists' Poor Gladiator, for iOS and Android users alike. The whole point of this free high difficulty game is to defeat the unforgiving debt by finding the right balance between payments and buying another skill point to make yourself closer to be the Conan of the Colosseum. In this mix between a incremental idle and simulation game, your little fighter handles all the physical parts of entertaining the crowd and you're more like his accountant spending money left and right or saving up for when the debt collectors call, which is about every thirty seconds. You can give him orders by tapping and holding your finger on one part of the screen and he'll ignore all the bad guys in order to get to where you are. You can also tell him when to use his special powers, but only after you unlock them with a little bit of gold you earned from the newly deceased fellow fighters. 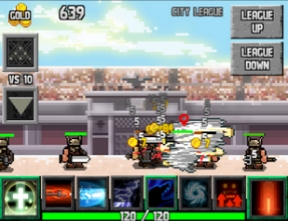 Game play mechanics are really that simple, but the game itself is complex. It's all about strategic balance. Do you spend more on your charisma, which lets you earn more per kill, or your dexterity to dodge incoming attacks and land your own with more accuracy? There really isn't one overpowered skill for you to dump all your gold into unless you're ready to see the picture of your tombstone pop up on the screen. Sometimes the crowd cheers you on by throwing objects at you; diamonds give you more money, potions up a random skill by one point, and mushrooms return you to full health no questions asked. However you're usually on your own to better yourself. There are plenty of leagues to jump into and the harder they are the more gold you get. The more gold you get the better you can be and the higher league you can go into. It's a nice little cycle if it wasn't for the fact every payment you make after thirty seconds, the minimum payment goes up, and interest piles on. So your measly little debt of ten thousand ends up nearing a million before long.

One of the best things about this game is no micro transactions, although the only one that could be installed soon is one to pay to get rid of the ads, that consist of a little banner and a pop up between dying and restarting. Nothing to tempt you into spending your money and gameplay is built about how well you can manage things instead of how much they can push you to throw cash their way. A very good thing, as this game already lets you feel the stress of debt. It is easy to start having anxiety over how fast your debt increases even with you paying it off. It feels like one big black hole that you'll try again and again to overcome. It will take a few... okay a lot of playthroughs to do this as there is no mercy with your debtors. Missing just one piece of gold? Too bad. Prison. You would have had enough less than half a second later? What a shame. Prison. Your kids are going to be lost in poverty forever? At least you won't see it because, Prison. There is no save button either. The only things that passes over to your new reincarnation is powers you unlocked and your knowledge of what you did wrong. Poor Gladiator does have a happy ending, or so I'm assured (playing this for days and I still slip up somewhere and have to start over), but it's the game itself that will keep you coming back. Horribly addicting in all the right ways, you'll find it tough to put it down.

Note: If you are searching for this game in the App Store, the title is actually PoorGladiator (no space in between).

Wow! Is there anything quite like buying one too many upgrades?

Nope. Not even a little bit of an idea how to approach this.

Tried a couple of times over the course of the past day. Common first experiences include:

-wondering how you're EVER going to get to that first skill, whatever that even means
-wondering what you're doing with your life
-wondering how fitting this game would be if it were just a metaphor for today's economic environment
-wondering what the despair on your face must look like from the outside

Ha ha Chaos... I've made a bit of progress, got the first two unlocks... I think the key here is to figure out a progression formula, write down what's working and start with that when the inevitable fail happens.

This seems the way to start:

You are one-hitting every troop (so Strength is "maxed out" for awhile) and making good money.

Add HP and a bit of recovery, and then go right to 10 opponents at a time.

Your sword kills everything in the path of the swing.

The next goal is to get ready to move up a league. I'll find my notes and post again if there is interest.

In my head, I'm a bit disappointed, because the time constraints mean that the game significantly encourages glass cannon building.

IDK @Chaos, there are moments in my grand plan where I'm not quite strong enough, but most times I'm taking just enough strength to get the job done... but always with enough HP and recovery to be (almost) sure there's no need to worry about failing by dying.

Anyone else playing? I've gotten some of the unlocks and have a question about one:
7K

The permadeth aspect requires a certain (twisted?) perspective, but the powerups do add some flavor and feeling of accomplishment along the way. I do confess, it's harder and harder to start a session that will surely end in failure, specially as the plan grows and the sessions are longer.

Hi, I'm Brob. I've been playing for a while. Here's some spoilers:

80k:
[spoiler] This puts a blue batman logo above enemies that were on screen when you cast it. While it's active, those enemies do greatly reduced damage and have much lower to-hit rates. Probably lower crit rates too.[/spoiler]

I also figured out how to beat it:
[spoiler] First, get the lightning strike ability and the spear ability. Then do your regular levelling up until you get to city league, with 36 str, ~36 cha. Now get to 400 HP or so.

Part 2: Make sure your skills are all ready to use. Increase your league to Champion 6 or Champion 7. Kill as many enemies as you can using the lightning strike and spear. This will give you around 20-50k gold. Then move back down to city league until your skills are off cooldown. Repeat.

If you manage things well, you should be able to do the "league jump" when your debt is around 250-300k. This enables you to eventually repay all the debt.[/spoiler]

I'm not sure if there are multiple debt-free endings...

callmerob's cap on strength seems to be the way to go rather than Brob's thanks to the latest patch. Also, big cats only give double charisma*league multiplier instead of triple like they used to.