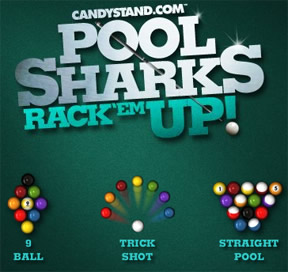 We here at Jay Is Games like to bring you the best games that the Web has to offer, regardless of genre. Pool Sharks, the new billiards game from Silent Bay Studios, is not just another pool game. With different modes, slick visuals, and the option to bedazzle other players with complex trick shots, Pool Sharks is one pretty piece of work.

Pool Sharks is actually several different games in one; there are three different ways to play against the machine or a friend, as well as a high score mode and trick shot editor. You'll also have options regarding the venue you're playing in and the color of the pool table, as well as whether you prefer a traditional top down view, or the more realistic 3D view. Get everything looking like you want it, and you're ready to play. Whatever type of game you choose, the basic controls are the same. The pool stick can be rotated with the [arrow] keys, or by clicking and dragging the mouse. To shoot, you'll need to either click and hold the mouse or hold down [space], releasing once you've reached the desired power for the shot. There are also options in the bar at the bottom to change the angle of the shot, as well as what part of the cue ball you're hitting. Although the basic rules of each game can be viewed from the menu, you will need some knowledge of the basic rules of pool to be able to be really competitive. Or you can skip the rules altogether and just go straight to making trick shots.

Once you enter trick shot mode, you're free to edit the table however you see fit. Everything is set up for a standard game of 8-ball, but all of the balls can be moved anywhere you like. There are also a number of sticks and triangles that can be placed to set up some fairly amazing shots. Once you've got your shot exactly how you want it, you can record it and share it with other players. If you're having trouble coming up with your own shot, you can browse and rate shots that others have made. There's also a high score mode that will let you try to sink as many consecutive shots as you can, and all of the regular modes support two players, so you can go at this one alone or as part of the community for that warm, fuzzy feeling. 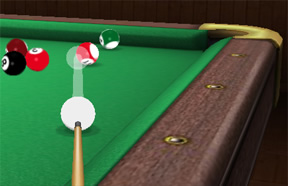 Analysis: In a genre that's inspired countless games, Pool Sharks is setting the standard for what a billiards game should be. The graphics are gorgeous, and the customizable options are a nice touch. Sounds are pretty much what you would expect from a pool game, with some additional ambient noise that fits the venue you're playing in. As for gameplay itself, the ball physics are right on, and there are plenty of different ways to play, so you'll never get bored.

There are a few problems, specifically with positioning of the cue. Depending on the layout of the table, the cue may be placed at different angles, to realistically portray the shot. The problem with that is, if you're not keeping an eye out for it, you can end up grabbing the cue and making the shot when you were just trying to rotate around the cue ball. The cursor changes when it's on the stick, so it's an easy problem to avoid if you're paying attention, and using the keyboard controls rather than the mouse will negate the issue altogether. I also had a minor issue with the game only having one level of difficulty; it would have been nice to start off with an easy opponent and then work my way up to the real sharks.

But those minor issues are more than made up for with the addition of the trick shot editor. In real pool, the best trick I can do is pretending that a shot I made was done intentionally. In Pool Sharks, however, I was able to make some shots that would have impressed even the most seasoned pool player. It takes some time playing with angles and prop positioning to get everything right, but once you've got the basics figured out, you're free to go nuts. Viewing shots others have saved can provide good inspiration, and saving your own is a great way to show off. And we all love to show off.

Despite the number of billiards games out there, Pool Sharks stands out in every respect as one of the best. Dismiss it because of its genre and you'll be missing a very well put together title. So what are you waiting for? Rack 'em up!

won't load for me (using ClickToFlash in Safari). Ad loads, then there's no flash to load afterwords.

It's Shockwave, not Flash. You'll need the Shockwave plug-in. Click "plug-in info" in the review header above to visit the download page for the plug-in.

Hey guys - we've found that sometimes the full version of Shockwave isn't installed by default on Macs (needed to run some of our games).
What we've found is that the version that Adobe provides to Mac users by default (through the Plug-In Info link) is the Slim version of Shockwave. The Full Installer version is needed to run Pool Sharks - which should be listed under both the Mac OS X 10.4 and PPC section of this link:
http://www.adobe.com/shockwave/download/alternates/

The direct link is here: http://fpdownload.macromedia.com/pub/shockwave/default/english/macosx/latest/Shockwave_Installer_Full.dmg

Alternately, users should be directed to this page:
http://get.adobe.com/shockwave/otherversions/
and instructed to select the ‘Full' installer from the last drop-down menu.

It wouldn't hurt to add a button where you can play the same setup again, rather than having to go back through all the menus each time.

Also, the installers from Adobe only appear to support 10.4. They might support 10.5 or newer, but I don't want to mess up anything on my main computer.

Shockwave really is an aging technology. (Too bad, too, because it does allow for some nice features unavailable to Flash.)