Most of us have heard of Pong, and all of us have heard of pinball. What do you get when you combine the two and throw it into a futuristic setting? Pure awesome, that's what. In Pongball Champions, an arcade game from Battlesheep, the year is 2351, and the world's favorite sport is Pongball. You are working your way up the circuit because you won't stop until you prove yourself to be the best Pongball player in the world. 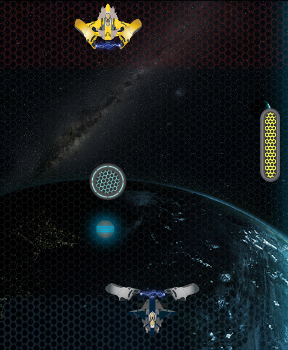 Move your ship with the mouse. Hit [ctrl] or [spacebar] to use your flippers. You need to get the ball past your opponent five times to win and move up in the ranks. If your rival scores five goals first, you lose and have to try the match again. It starts out simple enough, with no obstacle in your way. But as you progress, pinball-type bumpers become part of the field. The ball bounces off these at a fairly high speed, making things more difficult. Ship modifiers also start to appear. There are six types, three of them helpful, three of them not so much. The ball will turn green or red when it picks up one of the modifiers. If you want to activate it, bounce the ball on the blue power ray in the middle of your ship. This will give you the power-up until someone scores a goal, or you activate a different one. The power ray also has the effect of slowing the ball down, which can be useful to help gain control of a fast ball.

It's probably best to play Pongball Champions after your morning coffee, as its exciting fast paced action will test your reflexes. An option to change your flipper control to a mouse click would be nice for those not playing on a laptop. This game is just screaming for a level editor and multi-player mode. With 30 levels and atmospheric graphics, Pongball Champions is a near perfect blend of two classic games. We could be competing in this game in the future, right along with light cycle racing.

It's a pretty slick presentation, except for one thing:

*FOCUS* Specifically, losing it. If the cursor leaves the game window, the ship just freezes in place. Now, if you click outside the window, it goes into pause mode, but why would anyone do that?

I'm not twitchy enough to get through 30(!) levels anyway, but it is kind of annoying to be trying to return a ball and my ship just sits there because the cursor is in the wrong place.

If that got fixed, it would be a really great game.

P.S: The link on the picture is misspelled.

The second picture's link is missing an m.
it leads to pongball-chapions

Thanks, I fixed the link!

I agree with argyblarg above about losing focus and I think using the mouse to control the ship in general is a bad idea. I'd much prefer keyboard controls or a choice of controls. Or at least if I am going to steer with the mouse then I'd like to be able to click instead of pressing space like the review said. Other than that though, very cool reboot of a classic.

What Dandy said... fix the controls and you may have a fun game.

Also, I won the first level and nothing happened. I didn't advance to the next level. When I selected to restart, I hit the ball and immediately got a screen saying I failed.

Nice try, but I think it's still in beta.

What on earth possessed the creator of this game to make the single button you have to press be on the keyboard, and all movement controlled with the mouse?

What Dandy and argyblarg said. Very fun game but hard to win when my ship won't move..

As usually I will ask for the developer to come here for answering questions and fix some bugs or develop some improvements.

Also running into several bugs. If the ball gets knocked nearly horizontal, so that it takes long enough to get to the other side, it's declared "Lost" and reappears in front of the last player to serve. Sometimes, however, it quickly disappears again and is never replaced. Can't play without a ball. Also had a winning screen that wasn't totalling up my score; when I hit continue, it darkened partially, but never made it back to the menu. Had to refresh my window.

And like others have noted, it'd just make sense to be able to click for the paddles to work.

First of all, thanks for the review. We're very happy that you enjoyed the game. Just one correction - you don't always have to score 5 goals to win a level. In more advanced levels you'll have to score 7, or even 9 goals to win!

To everyone commenting here, thanks for your interest in our game and for taking the time to write about your experience. We really appreciate your feedback. I'll go through all the issues below.

Loss of focus
This is a Flash limitation. Whenever the mouse leaves the game's window, the game stops receiving mouse events and the ship halts. This is true to all Flash games, unless there's a workaround for this that we aren't aware of. If you could show us an example of this working, we'd appreciate it and implement it in future games (and maybe update this one).

Clicking outside the window pauses the game
This is intended behavior and typical of Flash action games. You may want to switch to another window during gameplay and the game pauses for your convenience.

Controlling with mouse vs keyboard
This is a very fast-paced game. Maybe in the first levels you won't feel it, but the action becomes frantic soon enough. The keyboard would never give you the response time one can get with the mouse. We tried it, and the game's pacing would be totally different.

Keyboard buttons vs mouse click
During development, the ship was fully controlled with the mouse. However, due to the game being so fast and stressful at times, more often than not we would find ourselves steering the ship quickly to the edges of the window and clicking outside it. This would result in the ship not firing the flippers (because the game doesn't receive the mouse click) and we would suffer a goal. We then added the possibility to use both the keyboard and the mouse buttons. Using the keyboard always works, because as long as you don't click outside the window, the game always gets keyboard events. We ended up dropping the mouse click because not only the keyboard worked better, but also because we don't know what the pages hosting the game will be like. If a player inadvertently hits a link when clicking outside the game, he could be sent to another page and lose progress in that level. Having said that, we feel that using mouse and keyboard was a good design choice, although it's something more familiar to hardcore gamers. It may feel strange at first, but it ends up becoming quite natural over time.

Multiplayer and level editor
These are all good ideas, which we had considered along with a few others. We wanted to release Pongball Champions and see the public response to it before investing in more features and content. If the game is successful enough we'll consider releasing a sequel with some interesting additions such as these.

Blank screens, crashes, and bugs
We have had a few players complaining about bugs. So far we haven't been able to reproduce them, so I ask that in case you run into such problems to please report them to us. But please don't forget to include your OS version, browser version, Flash plugin version, and provide a detailed description of the bug and the actions that led to it. This isn't confirmed, but it seems these issues are mostly affecting Mac users.

I hope these answers clarify you on our design decisions.

Many thanks N�lio for coming to the website and giving to us a detailed answer.
We really appreciate!

Have you considered having the game pause when the mouse leaves the flash window, rather than waiting for a mouse click?

Also, I'm able to reproduce the "lost ball" bug very easily on level 1 due to the lack of bumpers. Helps if you don't use the flippers; the goal is to get the ball to travel slowly enough that it triggers the "lost ball" behavior. I've gotten it to happen five or six times now (the ball actually stuck around properly once; all other times the new ball disappeared, apparently with the same directional velocity as when it was lost. Once this lead to a goal, as it crossed the line before totally disappearing; the next ball was stationary, and disappeared before it could be struck.)

Pausing the game when the mouse leaves the screen would cause the game to pause *a lot*. If you pay attention to where your mouse is during gameplay, you'll notice that you'll move the mouse past the game's window very often when defending fast balls coming from the opponent or, more usually, when blocking a ball that suddenly hits a nearby bumper.

Can you tell us the Flash player version you're using? Right click on the game and copy the full version number that appears.

We've been testing the game with an updated version of Chrome, with Flash version 11.8.800.97 and the lost ball issue couldn't be reproduced. We will see if others can reproduce it and provide more information.