Being a ghost isn't half bad. Everything's comfortable when you can float just above it, the grocery bill is a lot smaller, it's always peaceful and quiet, and transportation goes a lot faster when you can just appear. Yep, life is easier as a phantom, until people start to invade your peace and quiet by moving into your homestead. Time to break out "Haunting for Dummies" and prep your hair-rising wails for Glitchy Pixels' new indie game, Poltergeist: A Pixelated Horror. Henry B. Knight, now dead and transparent, is a little obsessive over his house and the new tenants need to go. Plan your scares to chase everyone out of the house, work around bosses, and gain back your peace and quiet in this puzzle game. Quite similar to Haunt the House, Poltergeist: A Pixelated Horror has some of the charm and much more of the challenge to really test your strategic side. 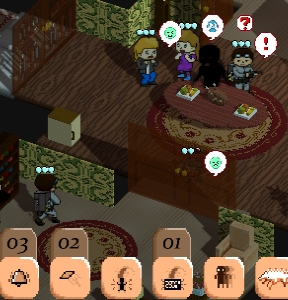 The goal is to chase every living thing out of the house, dog and human alike. Each level you are given a number of powers to use, and each tenant has a number of scare dots above their head letting you know how much it will take to have them stumbling over themselves to race out the door. Tenants don't want to leave the room they're in, and anything that happens in the walls of another room won't affect them. Even watching their partners, screaming their heads off as they charge out the door, doesn't really send off any alarms in their heads. You'll need to figure out how to be efficient with your sparse powers, because with even one living being left in the house and you've failed your goal. Henry B. Knight is really picky about that. Other challenges arise when "Specials" are called in... Witches and Ghost Hunters for example. The special units block some of your powers and it will take some extra careful planning to make sure they too will be sent out to get a change of pants.

As I mentioned before, this game is a lot like Haunt the House, though it relies less on luck and patience. It may lack some creativity when it comes to the powers you can use, but it takes a lot more skill and brain power. Every level really has one (or two) correct ways to solve it, making it a true puzzle game. You can skip levels if you're stuck, but beating them all unlocks another era to play and a new ending. Poltergeist: A Pixelated Horror is pretty clever in its solutions, and while a few of the levels do have some easy answers, you'll still feel a rush of achievement as you're greeted with a choir of screams and yelps as doors burst open. With the new powers it gives you, and the new characters that show, each level is a new twist and a new enigma to figure out so you won't grow bored with this any time soon. If you're a puzzle lover, or have a bit of a sadist in you and enjoy causing fear in others, all I have to say is, Happy Haunting!