Polara from Hope This Works Games is a jump and run mobile game with a little added color. Instead of simply hopping over gaps or testing your reflexes with split-second timing, you've also got to keep an eye out for an obstacle's color, switching your character's color to slip through each danger unharmed. Layered on top of that are some nice futuristic Tron-like visuals and a story that, while predictable, is actually kind of interesting in a semi-cheesy sci-fi sort of way! 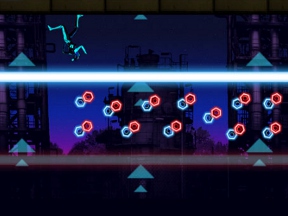 In the year 2140, a civil war rages between the classes, spawning a government-controlled military to keep the peace. In a secret laboratory, an agent named Lara is chosen to test a prototype biosuit that can protect against the defense grid. Not long after testing out the suit, Lara is contacted by a mysterious man claiming to have proof her father was killed by the very agency she works for. Naturally, he wants to get his hands on that suit as well. Lara makes a quick decision, escaping from the test laboratory and running onto the dystopian streets of the city. But she's not ready to trade allegiances just yet!

The defense grid in Polara is based on two colors: red and blue. As luck would have it (ok, as fictional scientific design would have it), your suit can change between these colors, allowing you to match oncoming dangers to pass through unharmed. Red lasers in your way? Make yourself red! Blue beam blocking your jump? Better blue yourself! Later, things like sliding floors can be activated by the appropriate color, putting you in the unenviable position of having to swap shades back and forth just to make it across a long gap. 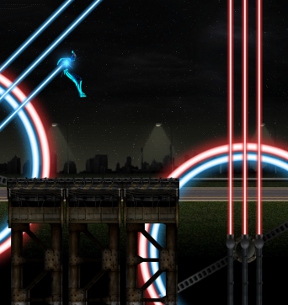 Analysis: It's a tough job trying to distinguish yourself in the world of endless runners, especially when you opt for a familiar left to right two dimensional point of view. But Hope This Works Games managed to do that with a little old fashioned gameplay twist along with a heaping helping of extras and some fantastic art. What sort of extras, you demand to know? Boss battles, six unlockable endless modes of play in addition to the main story, collectibles, and a surprising amount of variety in each stage. It's almost like a fusion of a platform game and an endless runner, but don't think for a minute that you'll get to slow down and take in the scenery.

The gameplay gets pretty complex after a few levels of play, and you'll quickly abandon the notion that this might be your standard jump and run game. The development team made good use of the color switching mechanic to activate or avoid all sorts of environmental objects, some of which are hazardous, but some of which are either useful or necessary for completing the stage. And just wait until you see some of these boss battles!

A surprisingly full-featured game for a genre that is traditionally very repetitive and void of content. It also doesn't hurt that the artwork looks fantastic! Plenty to experience the first time around, but even more once you start unlocking extras and trying out the new modes of play!