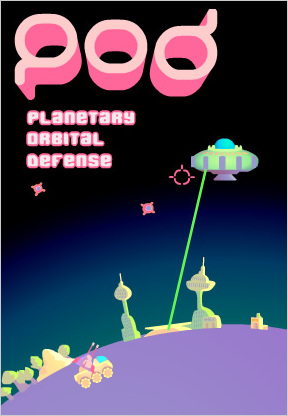 Benjamin Colwell of Indie Flash Arcade has just released this remarkably attractive arcade Flash game that blends the casual gameplay of classic video games with a stylish (and stunning!) presentation. The result is POD: Planetary Orbital Defense, a 15-level shoot-em-up bonanza that culminates in a boss fight against an alien invasion.

One part Space Invaders and one part Missile Command, POD starts you off right away defending your cities against an onslaught of alien creatures against the backdrop of a driving, deep bass beat. Initially your defense is but a single cannon with a limited supply of energy that regenerates with time via the surrounding power plants.

Control is with a combination of keyboard and mouse. Move the mouse to aim, click to fire. Use the keyboard to select [S] and activate [D] power-ups, and to move [Z,X] and toggle [A] between tanks in later levels. All keys are configurable by the player from the main menu.

Levels appear to be based on time: Survive long enough to advance to the next level, earning bonus points in the process. Score seems to play a lesser role in this game, however, as it is all about surviving and beating the alien boss ship at the end of the game.

Analysis: Planetary Orbital Defense is a beautifully crafted game that offers a decent challenge for anyone interested in about 15-20 minutes of fun. Although a tad on the easy side, the game features tried-and-true gameplay repackaged in an engaging and compelling production. The soundtrack, by DJ Kuru (aka Matt Fay), complements the game play perfectly and never gets tiresome to listen to. The graphics in the game are simply sublime.

I especially enjoyed the 'changing of the guard' scenes with the planet rotating to switch between cannon and tank levels, and did I mention the soundtrack? Almost worth playing just for that.

I found the screen to small to enjoy the game.

It was fun except for the horribly slow animations between levels- and no control over when instructions/stats went away.

The design (and name) seems to have been lifted from the upcoming Will Wright game Spore.

Re: nalyd's comment, if you're having problems with the screen size, you're probably playing the version hosted by Kongregate which often seem not to offer the optimum sizing for their games (because they want to fit in their kongregate chat room windows and whatever)

Play POD at IndieFlashArcade instead,which is the game author's website anyway, and there should not be a problem.
Or if you're still having sizing probs with the Indie Flash Arcade window with its bottom-menu, try this direct link to the game for just the game in awindow by itself:
http://www.indieflasharcade.com/flash/PODkong.swf

Man, I really wanted to like this game, but it just seemed like all you were doing was delaying the inevitable. By the time the force-field ship was shooting at me, my "spaceport" (I guess, since I had no idea which was which) was so pummeled that there was little I could do to stop it.

It seemed painfully slow to try and shoot something and when you're running low or out of energy and the sky is filled with 20+ things shooting back at you, I just don't see the fun.

It's a good way to kill about 10 mins before you realize no matter what, you're going to lose.

very stylish, beautiful colors, absolutely superb music, but...
1. i don't like the feel of the controls, it's more like you're fumbling around, trying to catch fleas, than really controlling the game
2. i dislike the fact that you don't stand a chance against the opposition, it's too much too soon, and the controls are too clumsy to really enable you to defend efficiently.