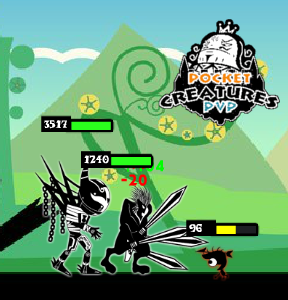 It's always a good time to look at a game that simulates America's national pastime: monster battling. Who wasn't thrilled at the epic conflict between the Atlanta Balrogs and the New York Zombees in the 1996 Monster Battling World Series? For those of us like myself who just can't get enough monster battling, there's Pocket Creatures PVP, a strategy game from NTFusion that expands on the original Pocket Creature.

In Pocket Creatures PVP, you play a monster trainer who must save the world after Queen Juliet is corrupted and turned to evil. You'll accomplish this with your mouse and your army of monsters. Monsters attack automatically in melee or from range, based on their species; all you need to do is watch and hope your training was enough to see them through! Winning battles earns you gold, which you can use to buy new monsters or feed your team, boosting their stats and allowing them to evolve into more powerful forms. You also earn Gem Points, which can be spent in the Gem Tree to earn gems that serve as stat-boosting equipment for monsters.

The monsters are the star of the show here, as one might expect in a monster battling game. There are four basic types... the Dragon, Corpse, Variant and Pinocchio, each of which evolves twice. You'll select from one of two forms each time, meaning that like the first game there are 28 basic monsters available, along with 13 randomly-found guard monsters. Beyond having their own battle styles and stats, each monster also has a unique ability to give it an edge, ranging from healing to life draining to piercing ranged attacks. Since monsters battle automatically, the strategy here lies in making teams with synergistic monsters. Each monster is lovingly rendered in a style reminiscent of Sony's classic Patapon and has unique animation and sound.

There are over 24 battles available in Pocket Creatures PVP including the Hunting Land that sets you up against a random enemy team. As per the game's name, PVP is another addition to the series that allows you to fight against other players using the same system as the main game. PVP matches are ranked and a matchmaking option is available to ensure you don't get stomped too badly.

If it wasn't clear, Pocket Creatures PVP is practically overflowing with content. Tweaking your monster team is a lot of fun, especially when you take them into battle against other players. The game is well-presented, accessible and addictive. It really shouldn't be missed, much like the 2002 Monster Battling World Series between the Anaheim Demons and the San Francisco Giant Spiders. Sign up (and challenge "Mordridakon" to a PVP battle) if you're feeling monstrous!

While fun the PVP part isn't as complex as some players may want it. The best team is pretty much common knowledge with only the gems being the X factor.

Stick Ranger (which Jayisgames should really update on as it have improved a lot since the last time) have the same idea but more RPG-like and complex enough where there isn't a clear "perfect" team. If you looking for something a little more complex with the same kind of PVP then it is worth trying out.

As for this game minus the PVP part, it is pretty well made and you may find your godly team will need some extreme edits and even gem resets. The end is where there will be teams made to counteract anything you may have made so don't think you can get by just with four monsters. I was just kinda disappointed how the PVP became so one sided though that shouldn't stop you from playing this game and even at least try the PVP part out to see how you may compare to others.