For those of you who ever sat in class, watching their teacher drone through an analysis of HP Lovecraft's effect on modern literature and thought to yourselves, This is so boring. I could do better... Kairosoft, creator of Game Dev Story and Grand Prix Story, wants you to whip out your iOS of choice and prove it. Pocket Academy is their latest casual simulation, and this time you're put in charge of a newly constructed, struggling school. With only a handful of students, a single teacher, limited facilities and even more limited funds, will you be able to build it up to be one of the highest ranked schools in the country? 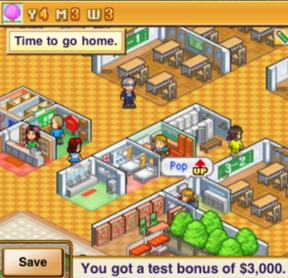 Your academy, for the most part, runs itself... though not very well. Students will go to class and teachers will show up, but for your school to grow and improve you'll have to take direct action. As time passes and students move through their years, you need to play closer attention to their dreams and suggestions, and work to make sure your school (and your faculty) has everything they need to graduate successfully. There are actually two types of currency in the game; cold, hard cash, and a system of points in different areas of learning (Research Points). Both are important since you need to spend them both for research projects, special tests, items, challenges, and more. While points are earned over time through regular activities, cash is primarily earned through tuition, which is paid on a schedule. Balancing the school's maintenance fees and teacher salaries with making new improvements often becomes the biggest issue at hand. (So installing that new vibrating, Mai-Tai dispensing deluxe chair in the administrator's office probably won't go over well.)

In the beginning, you'll want to take things slow and resist the temptation to start spending immediately; allow your funds and points to accumulate while you figure out what your students really need. You start out with the basics, but there's a lot of room for you to build with. The game uses a simple touch based control for everything, including moving around the map, and opening the menu. From the menu, you can access the build screen, which will let you place new facilities and decorations wherever you please (as long as you've got the dough), and also the administrative screens where you can research new school additions, arrange for special tests or challenges, and more. Faculty management is also important; you want skilled people teaching your students, but more qualified applicants (or those you train yourself) are more costly. Geez, it's like teachers expect to be paid well for the time and efforts they put into their work... who do they think they are, indie game developers?! 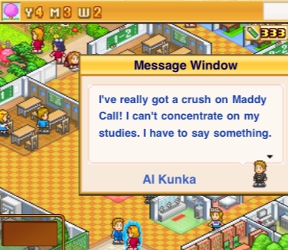 Analysis: Only Kairosoft could take every aspect about school and make it adorable. That's right; no creepy janitor with the wandering eye, no teacher who sprays spit when she talks to you and smells like mothballs and regret. Everything about Pocket Academy is cheerful, colourful, and a joy to watch, with Kairosoft's trademark sprites and beautiful, simple artwork. As time passes and your school grows, the little changes that crop up are neat to catch; the way plants change with the weather, the different uniforms and behaviours certain students adopt when different activities are going on, all of it combines to keep your eyes and your brain entertained. The game's tone almost plays everything too straight, however, and it feels like the game might have benefitted from a touch of zany, anime-style comedy charm to people and events to give it more character.

If Pocket Academy falters, however, it's because it feels like you take a far too passive role in the school's growth. There's a bit too much time simply watching your students mill around, and simply not enough random events or decision making on your part to really make you feel like you're having a direct impact on the school itself. A tutorial also might have been a nice touch, since the game offers little direction beyond pointing you towards the in-game help menu. Assistant lady, what am I paying you for? Where do you go when you're not nagging me about placement scores? That's it, I'm totally blocking Farmville from school computers! Next up is Myspace and sneezing panda videos! Yeah, that's right, I know what kids these days are into!

If what you want is something simple and easy to dive right in without a whole lot of complicated management, however, Pocket Academy is an easy recommendation. It's staying power will largely depend on how attached you are to a high score, but even if you don't care about numbers the game has a lot of content to show you. The way the game paces unlocking options and facilities may chafe a little on subsequent playthroughs, but on your first run the progression feels natural. After a slow start, Pocket Academy serves up a bustling, addictive experience full of charming characters and diverse activities. While it lacks real depth, Pocket Academy is just the right sort of easy to pick up but hard to put down gameplay that fans of the genre will definitely want to check out.

Dang it Kairosoft, I can't buy ALL your games! I'm still not bored of Game Dev Story!

This is fun, but I'm finding the "secret" information annoying.

someone found that different pathways increase the chicken room, but in complicated and unintuitive ways, like nearby grass tiles (1=no effect, 2= +1 spirit, 3= +2 spirit, 4= +1 spirit!.. it goes down!); red panel hall is similar but more drastic; however, sidewalk increases spirit twice, but more sidewalk does not reduce the spirit. This makes no sense, and experimentation is heavily penalized (unless you save-restore repeatedly)

One of the highest-stat teachers doesn't actually seem to teach well compared to similar teachers. Does he have some other hidden benefit?

What is the acceptable ratio of teachers to classrooms and/or students?

research costs go up by 10% every time you research something, which suggests *not* researching things, or at least skipping the small stuff until you get the big stuff.

In contrast, finding new spots is not annoying, because the game remembers the ones you've discovered.

Except for that, it's a very pleasant and enjoyable game.

I somehow feel this game is more fun to play. It feels less hectic than HSS.

Can you teach me how to create popular spots? I know I am supposed to put like similar facilities together but I kinda have no idea what is similar. =(

Please help! It's my third day into the game and loving it~

Nuriko in order to have popular spots you put facilities by each other. Here are a couple for you