These days, Ben "Yahtzee" Croshaw seems to hop back and forth between being a notable indie game designer who also does hilarious game reviews, and being a hilarious game reviewer who makes notable indie games. Certainly Chzo Mythos remains one of our highly rated favorites. But Yahtzee has always been willing to try something different. Case in point: the creation of Poacher, a Cave Story-styled high-difficulty action-adventure platformer with Andy Capp look-alive Derek Badger as its star. A simple night out hunting bunnies and trespassing on estate of the local lord, leads Derek to a fall through a literal rabbit hole, landing smack dab in the middle of an ancient conflict between the underground Spirit Kingdom and their malevolent enemies, Dark Lords. Will he be able to get up to the surface before his wife starts readying the rolling pin? That's up to you, guvnor. 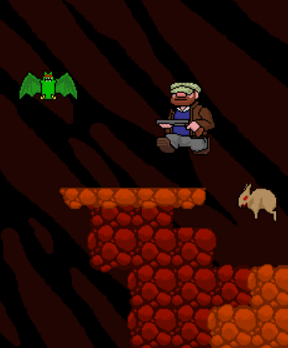 Derek's movement is controlled with the [arrow] keys and jumps with the [spacebar]. Derek has his trusty shotgun with him, which fires in the direction he's facing. Soon after starting, Derek will acquire the ability to launch spirit grenades with [C]. These grenades can deal powerful blows and are useful for destroying crystal. Enemies and spikes will drain Derek's health, but he can recover by chomping on the pudding and sausages inexplicably strewn about the cavern. Enemies drop coins which can then be spent on various upgrades. Go deep enough and soon you may discover the dark secrets of the abyss... or better yet, earn a few quid!

Analysis: Poacher is hardly an experimental game, but it does feel like an experiment on the part of the author. Obviously, as Yahtzee's first work in Game Maker, there is going to be a period of feeling out what the engine can do. More than that, though , this is probably the first game that the author has done that could be called action-oriented. There's an exhilarating sense of a designer treading new ground, and that exhilaration helps to make up for what flaws the game has. 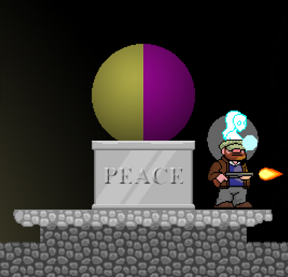 There are certainly a number of clichés in Poacher, but they balance each other out so well that an intentional sense of fusion feels at play. On the one hand, there is a vaguely epic story of fantasy conflict running in the background. However, when combined with a ridiculously ordinary protagonist, who can't be arsed to pay attention to the backstory, the seriousness deflates. Poacher becomes a case study in how to integrate successfully integrate humor into a work that is not strictly a comedy. For instance, one of the main baddies of the game are rabid rabbits. Now, you don't need Monty Python to tell you that making something cuddly be unexpectedly vicious will get you a laugh However, taking a good look at these things, with their blood-caked mouths and glowing yellow eyes is definitely enough to freak one out should a pack of them descend on you. It can be difficult to mix horror and humor without one dominating the other, but Poacher pulls it off, with a heaping helping of metroidvania along for the ride.

No one's first work in a new engine will be perfect, and there are stumbles to be found here. Having the keys so close together makes for awkward action, and it's a guarantee at least a half dozen times that you'll shoot when you want to jump, and vice versa. This wouldn't be so bad if the respawning enemies and finicky jump puzzles didn't keep you constantly on your toes. For someone who rails against artificial difficulty in his reviews, there was quite a bit of it here.

Undoubtedly, Yahtzee's work with Zero Punctuation will give Poacher a certain publicity that it would not otherwise have. However, its notability is not unearned. Poacher is a solid exploration game with a twisty story, some funny jokes, a couple effective scares, and a satisfying host of secrets to unlock. It is not a perfect game, but it is a very interesting one, and it needs no more justification than that.

"... this is probably the first game that the author has done that could be called action-oriented."

I am interested to hear why 1213 and Art of Theft aren't action-oriented.

Of course, this is only one reviewer's opinion, but I considered 1213 and Art of Theft to be more puzzle-platformers than action-platformers. At the very least, I found the actiony bits like the boss fights were awkward in comparison to the skulking in the shadows and timing your movement bits.

In any case, Yahtzee himself describes it as "perhaps the most overtly gameplay focused" game he's every done.

I'm usually more patient than this, but I gave up even before I got to the first save point. Sick of having to listen to that spirit thank me for saving her and then asking me to take her home every single time I die...

Is that the kind of thing I'll have to put up with constantly if I carry on playing??

(I am not even from that part of the country but describing it as a mere pudding is a sin!, for the most part it is not even dessert!)

- immigration have been informed - expect delays:)

I apologize for my pudding faux pas. I know how important it is not to rile all you mad cow-stricken folk out there.

It sure is an awesome game! Suffers a bit from artificial difficulty (memorization and luck), which will definitely cause a few rage quits. The overall experience totally makes up for it, though.

i have to say, the beginning of this game leaves a horrible impression.

But one you get to the first boss it starts to hit it's stride and then it's pretty good. So for those that got frustrated after the first save point, it might be worth trying again.

The safest way to deal with bats is to actually move backwards when they fly towards you then shoot them when they rest on the ceiling. If you try to get under them while they are flying towards you there is a high risk of taking damage.

Dealing with the bunny room

The easy way to beat this is to stay on the platform you get frozen on during the cut-scene. Just aim up and hit the bunnies that drop from the chute above you. The bunnies from the other chute can't jump up to your level so just let them accumulate at the bottom. Once the bunnies stop dropping (this takes a while), just shoot downwards to kill the mass of bunnies below. You also might want to walk back to the first save point afterwards since you might die in the next section.

The game is a little rough around the edges, but still pleasantly playable. I especially dig the fact that Yahtzee didn't babysit too much and hasn't shied away from presenting actual challenge, even when it meant a little backtracking (although "cutscenes" really should be skippable second time around).

However, I'm completely and utterly stuck on 33%, the Oil Rig part right after the save game. There's a circular path leading back to the save point again, and that's it. Help?

At the end of the circular path, you'll find yourself having fallen right on top of a switch between two goo-falls; shoot it, and they cut out. You then want to move left one screen and shoot the switch that you'd shot earlier to allow you to take the lower path; note that this closes off access to the lower path again, but opens up a new route behind it. You'll need to backtrack along the circular path (one screen right, back up between those two goo-falls that aren't falling anymore, one screen left, and one screen down) until you find yourself at the newly opened route.

THIS game has all of aspects I look for in a good metroidvania: tight platforming controls; significant and evenly-interspersed movement- and combat-enhancing upgrades (both story-related and optional via purchase); difficult, but not ragequit-inducing areas; decently long playtime, particularly for a free game.

Finished the game today with

100% completion, having seen both bad and good endings. I'm currently on my second run-through in an attempt to track down the seeeecret ending hinted at in the credits, and I'm pretty confident that I know how to get it.

Thanks Muttroid but I kinda already solved it through the power of posting. :) Don't know how I missed the so obvious bit so many times.

Having finished the game, I must now say I think it deserves much more credit than it initially seems to. I mean, I can see reasoning behind some dubious decisions, like respawning enemies for example - they are both source of cash and the way to keep rethreading old ground interesting. Also, once you get enough skills and power-ups you can still run through those areas without too much bother.

I also very much applaud the difficulty level. Just right enough. I can see certain part of the playerbase getting frustrated, but I think Yahtzee made the right decision - the game is tough at times, but fair. If you keep dying, it's not because the savepoint is too far, it's because you are messing up.

And the ending bit - nice. Overall, a great addition and one of the best platformers I played this year. It's almost as good as Untitled Story and Cave Story - not quite, but almost.

Forgot to add - I absolutely love the way Yahtzee included morality choices in the game, without giving any hints whatsoever they are there. Definitely something "big" games should take notice of since it's a much better alternative to Mass Effect/Bioshock/etc.-like "pick good choice/pick evil choice" routine.

Anyone knows how to get that treassure chest in the jungle? it is up there surrounded by grass and i cannot find a way in

I FINALLY beat the secret ending!

I absolutely LOVED this game! It was punishing at times, yes, but the gameplay was SOLID. It reminded me of playing MegaMan as a kid. You either got good at the game, or you died. That's all there was to it. You end up learning enemy patterns, boss tactics and everything else, not because the game hands them to you on a silver platter, but because you end up dead if you don't. You EARN the right to be good at the game! Yes, there is a learning curve. Yes, bits of it are unforgiving. Yes, I would pay money for this game!

Can anyone please tell me how to get the "Bad ending"? I managed to get the good one and I'm halfway to the "secret" one, but no matter what I try I can not imagine what I need to do to get the bad one.