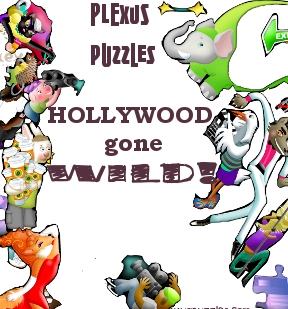 Lights! Camera! Puzzle! Everyone's favorite sawer of jig, Plexus, is back, with a new mind-bender of a visual workout: Hollywood Gone Wild! This time, the subject is the literal zoo that is the film industry as some animal auteurs have gathered to film the latest boffo-box-office, fun-for-the-whole-family, critical-darling, summer blockbuster! All the pieces are here for a smash hit, but they need you to put them into place. Roll 'em!

Like the previous Plexus puzzles, Hollywood Gone Wild doesn't quite follow the traditional jigsaw formula. Each element of the picture is complete in its own piece, meaning that its much more about lining borders up correctly than predicting the incredibly chaotic overall picture. First, using the mouse, you click on the piece you wish to move/rotate. Once clicked, use the [arrow] keys to rotate it to the preferred alignment, then drag them into place to join pieces together. The board starts as a mess of animals and pieces, but with your help, the production is sure to come together at the last minute.

Hollywood Gone Wild has a great deal of challenge, but only a bare-bones amount of sparkle. The animal actors and techies are drawn hilariously, and the completed picture is quite satisfying (and forms a more coherent scene than other Plexus puzzles), but there's nothing on the screen that wouldn't be there if you were completing the puzzle on a card table... an incredibly crowded card table. Still, if you like jigsaws and want an engaging fifteen minutes of vexation, Hollywood Gone Wild proves you oughta be in pictures!

Thanks to Tricky for the complete puzzle!

Done! I love these puzzles.

...A significantly less dense workspace would have been very welcomed. Even the finished puzzle took up most of it.

Yeah, I like these puzzles, but I really really want some kind of "work area." It's hard to shuffle all the pieces around when there's barely enough room for them.

Where does the feather go? Can't figure it out!

Great fun, but I have to say I was slightly irritated, because

the edges were not pretty even, as in the other plexus, but contained plenty of places, that looked as if something should fit in there

Thanks to Tricky for the complete puzzle!

Apparently I'm not the only person who notices these things. I honestly can't remember a game that I've played in the last year that didn't have typo's. It's one thing if English is your second language, but if the game is made in America or England.....come on folks.

Is it just me, or was this one easier than usual?

@Username: I don't think Buttons was complaining, just commenting on the cuteness.