Pew Pew Pew Thwak. Thwap Thwup Splat, Wheeee! The review of Platypus could end there, but in the interest of, you know, explaining things, I'll continue. Platypus is a wonderfully unique side scrolling shooter created by Anthony Flack. Everything in the game — from the enemies to the backgrounds and even the weapons fire — is made from plasticine. This playable claymation shooter is filled with action and quirky design choices that have made it an instant cult-classic. 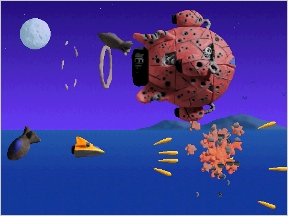 Platypus drops you in the action as soon as you fire up the game, leaving the backstory either to your imagination or to read elsewhere. The Collosatropolians are attacking your home of Mungola, and as the last of the Platypus fleet, it's your job to take them down. You have an array of weapons to use, ranging from spread shots to rockets and even lasers! Defeating whole squadrons of enemies can produce a power-up star, a crucial item that grants you 20 seconds of using the above-listed weapons. Shoot the star to select your gun, then touch it to start kicking some plasticine tailwings.

Platypus is very easy to learn but gets more challenging the further in you get. Getting your hands on the right ammo and power-ups is key. There are occasional bonus crates that float up on balloons which contain additional goodies (such as orbiting guns, which are niiiice) or points. Make sure you hit the crate and not the balloon, otherwise you'll curse Zeus and Poseidon as the box falls to the sea. Enemies also leave behind fruits that grant bonus points. Fruit you ask? Makes as much sense as the name Platypus, just go with it.

You have the option of playing with the mouse, arrow keys ([spacebar] to fire), or joystick to control your ship, and you can play with 2 players at a time (or three players in the sequel). Playing in co-operative mode is pretty sweet! 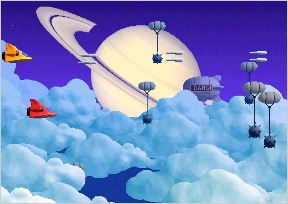 Analysis: Platypus isn't a new game. It was released a few years ago, and the story behind the game's development is a bit of a sad one. After being paid a pittance and signing away the rights based on a demo, it took creator Anthony Flack over two years to finish making the game. A fire in Anthony's home destroyed everything he owned save the clothes on his back. Fortunately a copy of Platypus' code and assets had recently been made and were residing at a friend's house. Plasticine was hard to come by in New Zealand at the time, so he ended up going to a local toy shop and buying all the little rainbow packets of modeling clay they had. He mushed it all into one big gray lump and made everything by reusing the same clay over and over. Color was later added digitally. For those interested in the process, there are some great pictures of the models for the enemy ship in Flack's next game, Cletus Clay, which is very similar to the ships in the Platypus games.

When looking at Platypus for a potential review, we had a hard time deciding which game to feature, the original or Platypus II. While the first game was older, it had so much more charm than the somewhat sterilized sequel. More blood, sweat and tears were poured into the animations, leaving the second game to feel rushed and recycled by comparison. The action heats up faster in the sequel and the power-ups appear much earlier, but in the end, something about the original game is much more addicting. Perhaps the fact that it seems more difficult, and you cherish the achievement of making it through a level or discovering the precious power ups. It makes you want to hunker down and keep playing. The music in the original builds nicely and changes the mood of the levels, adding to the driving feeling that makes you want to keep going.

These games may not be for the hardcore shooter fan, but will appeal to the casual game fan, and may even convert some that aren't fans of shooters. They really embody the qualities of a good casual game, not too grueling, not too long. And the style of the games really draws you in and make these really fun to play. Once you've played a level it is unlocked, so the replay value is decent, you can start back at the beginning to improve your score, or just select your favorite level and pew pew pew thwaka wacka away.

My anti-virus (AVG Free 8.5) found a virus in the executable:
Trojan horse IRC/BackDoor.SdBot4.KSR

It's most likely a false positive. All game files are scanned for viruses before being made available to the public.

Yes, it's a false positive. AVG is known to return these results with some Reflexive games due to the nature of how it scans files. Don't worry, the file is perfectly safe, and Reflexive has contacted AVG regarding the issue. Plus, I scanned it myself with another program. :-)

Sorry to double post but I thought it was important to say that I found this game years ago.

Oh WOW!! I played this game years ago, but it got lost over time on some forgotten old computer. In fact, I don't even remember where I got it from. So I am pretty glad to have the chance to play it again! :D Just waiting for it to download and then I can fire up the nostalgia

This is an awesome game. You can feel the love it was crafted with.

One of my favourite Easter Eggs: complete the first level WITHOUT killing any enemies (just dodge them) and you get rewarded with a huge powerup! It's called the 'Passive Resistance Bonus'.

Anthony deserved to be rewarded for making this game, so it's a huge shame that he didn't. Everyone go buy Cletus Clay when it comes out.

Hey, thanks for your kind review of my old game! It's great to hear that people are still out there playing and enjoying it.

I'm glad to hear you prefer the original game - I wasn't involved in the sequel at all, and agree completely...

Thanks for stopping in, Anthony! Normally, I'm not a big shmup fan, but I had a great time with Platypus. I wanted to line quarters up on my monitor, just like the good ole days. Can't wait for Cletus Clay!

Platypus was fun to play - even more so once I created a couple "enhancements", like infinite lives and ammo time. Better with brain than with brawn. ;-)