Hot on the heels of the recent apppearance of a Massively Multiplayer Pong game (which is no longer available, go figure), Plasma Pong, a downloadable Windows game, takes the old favorite table tennis formula and fills it with liquid plasma. 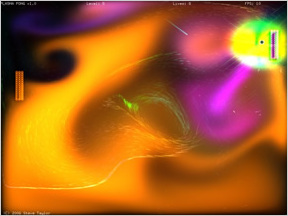 Using fluid dynamics you can push the ball around the screen or charge for a cannon shot. The game ends up playing more like a visual experiment than a serious Pong clone, but it's worth a few minutes of playtime nonetheless.

Move your paddle up and down with the mouse to follow the ball. Press the left mouse button to send jets of plasma out of your paddle. Use it to deflect the oncoming ball and to fill the screen with colorful smoke. Hold the right mouse button to absorb plasma and attract the ball. Charge for a few seconds, then release to fire a power shot.

The riveting part of Plasma Pong is the visuals and killer musical score. The plasma looks like psychedelic liquid smoke. The dramatic presentation makes you feel as if you're doing something monumentally important. Pretend you're saving the world or something, isn't that what we're supposed to do in video games?

There are levels of difficulty in Plasma Pong, though there doesn't seem to be much of a challenge in even the highest levels. The computer isn't very smart, but then again, no one plays Plasma Pong for the challenge. Sit back and have Alt+PrintScreen ready to go.

Analysis: A simple and beautiful little title that borders on visual experiment rather than video game. It's a treat to look at, but when it comes down to gameplay there are a few gaps in the plasma.

For starters, there's no real sense of progression. Each time you score a point, the plasma clears and it says "LEVEL UP". But very little (if anything) changes. And the computer AI doesn't offer much of an opponent. A multiplayer mode is planned for the next release of the game, so hopefully your friends can offer more of a challenge.

So go ahead, give Plasma Pong a try.

Level up makes the plasma thicker, according to the site.

Yeah, but the increments seem much too small. Only after skipping dozens of levels (cheat!!!) did I notice anything.

Wow! the potential of the fluid dynamics on games really impressed me! this looks, of course, more like a test than a game.. I would invest more on this (if i had some other idea hehe)

I am number one and believe it I did not cheat on one level. I did it while on business trip(board to death to destionation) and fyi the plasma does get thicker just takes AWHILE to notice it.

I'm picturing this game as a great mini-game in a futuristic action game. Anyone else?

I was just about to email this to you, Jay. :P

Great game, I always end up losing because I'm watching the plasma effects though.

This game is awesome.

I found something really fun to do with this. GO into the sounds folder, and replace the song battle_loop with a favorite song of yours and rename that one "battle_loop". That's the one you'll hear playing and speeding up with the levels. Currently, my song is "Hot Rod Linkin'", and I thought it was fast before...

WOOHOO! lvl 52. I was playing TNT, sounded so funny.

here is something hilarious about the game. using Masterwabbit's trick, I changes the battle loop to dennis leary's a$$hole (the song). by using the cheat "L" to advance levels (about level 13).

Hi this is my First or 2nd post not sure hehe
but This game IS NICE with the little hack of course...
So uh yeah
This isnt really a spoiler:

wooo.
that cheat is REALLY fun, and the plasma gets really nice looking round levels 400 and above.

decided to submit my score at only 1260

How do you cheat?

Wow! I love this game... first time I have ever really enjoyed Pong.

It seems the game was taken down by the author, as the website now shows only this:
"Pong is a registered trademark of Atari Interactive Inc. To respect this trademark, Plasma Pong will be down until further notice."