It's hard being an android. Especially after crash-landing on an unknown planet with a directive that you and your AI friend conveniently forgot. Fortunately for the android in PlanetScape, a procedurally-generated resource-management game, the necessary materials to reconstruct your pod are below the surface of the hostile planet. 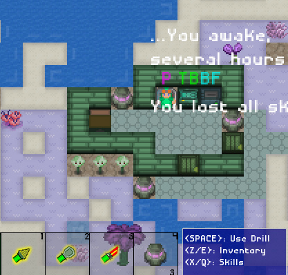 You begin with your pod, your encyclopedia of a friend, and a few construction blocks. The [arrow] keys are naturally used to get around the planet, while [spacebar] uses your current tool/block. [Z] opens your limitless inventory (making storage blocks a thing of the past), and [X] displays your skills, each of them growing the more you use them. Once you've made a nice, cozy, Ghoul-free home, you can begin drilling down into the planet, each layer filled with more valuable resources. Enemies become stronger, however, and lava and acid will need to be sealed, dwarf-style.

I only have a few, minor complaints about PlanetScape, one of them being that the enemy's intelligence is about equivalent to a goldfish's, as they face against walls more often than chasing you. They leave something to be desired when you can stand two blocks away and blast them to your heart's content. Another problem is the astonishingly small amount of hotkeys for immediately placeable/usable items. if you want to use an item that isn't on your four-item hotbar, you have to go through your inventory while vulnerable to the enemies that don't have an attraction to walls. This is a very easy way to die. Besides these two very small problems, this game perfectly feeds my jittery mining habits that Minecraft has forced upon me. And let's face it, what's more soothing than grinding away on an inhabitable planet?

Thanks to Piers Gilpin for the review!

Found a sweet game you think deserves some attention? Write a review, send it in, and we might feature your article!

Hint: How to get to the lower levels:

Use a spade two times to make a hole. Then place a ladder on the hole to get to a lower level. Place a ladder anywhere underground to go up a level. There are 6 levels. You must upgrade your spade to dig deeper.

Some of the secret blocks:

2. Fence - Place a wood block on top of another wood block.

4. Green Stone Walls - Same as Red Stone Walls, except use a Slime Core instead.

Where/how do I find or craft the fishing pole?
Has anyone found a guide or crafting list online?