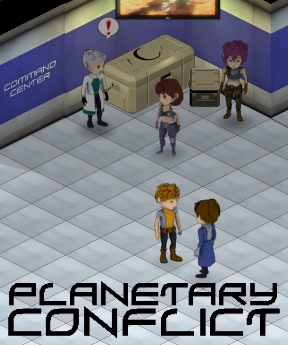 Planetary Conflict is the latest game from the guys at Toge Productions. They've stepped away from Infectonator and Necronator to bring us this multiplayer turn-based combat RPG. You've joined up with a kind of mercenary organization, dedicated to keeping the peace within the galaxy... by force, if necessary. When there's trouble with Insectoid aliens or space pirates, they'll send you and your squad into the fray to put everything right. While you can play alone to some degree, you should note that the difficulty definitely leans towards getting a group of Facebook or Twitter friends together to kick some alien butt... provided the aliens in question have butts, of course.

First thing's first; note that in order to save your game, you must register with MochiGames and log into your account. You can still play without logging in, but you'll be unable to save. You'll start the game with a little character creation, and some weapon proficiency points to distribute across the nine different weapon types. After a quick tutorial you'll be ready to start doing missions, and regardless of mission type (such as 'Escort' where you'll have to guide certain characters into a safe zone), they boil down to one thing: combat. Single player combat, unless you have Facebook or Twitter friends playing with you at the same time to form a squad.

During combat every action uses up action points (AP). You can move your character by clicking where you want to go, and a small box will pop up showing the number of AP it will cost to move there. Click it again to make the move. Now, you don't know where your enemies are, but they'll pop up suddenly you get close enough to them or they to you. To attack an enemy, click one of the two weapons you can carry, then click the enemy. Again, you'll see a small box, this one showing your chance-to-hit percent. Click the enemy again to fire, or if you want to go back to the movement cursor, just click your selected weapon again. After a certain number of rounds of combat, you'll enter sudden death mode, where everyone becomes visible to everyone else.

In order to go on missions, you need to have enough energy, which gradually replenishes over time, making Planetary Conflict the sort of game you play for a while each day rather than hours and hours at a time. After you finish a mission, you'll get experience, money and possibly loot. If you level up, you'll be given three more weapon points to distribute and a perk point which you can spend on equippable perks that give you various stat bonuses. With your money you can buy new weapons, armor and other items. If you don't mind parting with actual, physical cash, Planetary Conflict does offer you the option to purchase Mochi Coins to spend within the game to beef up your character, though this is unnecessary and completely optional.

What's slightly less optional is that unless you do connect with friends via Facebook and Twitter you'll find that the game doesn't have much to offer in the way of a singleplayer campaign as the difficulty quickly ramps up. While playing alone is a great way to get a taste of the game and decide if you want to continue, the game is definitely intended to be a multiplayer experience. If you don't want to give the game access to your Facebook account, you may want to consider making a Twitter account just for playing games like this or Echo Bazaar, which is quick and painless, and lets you and friends play together without actually giving up any privacy you might be worried about. 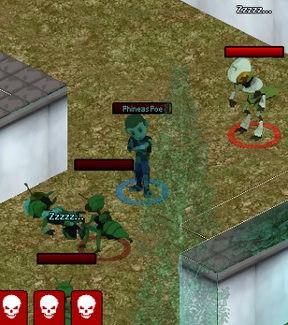 Analysis: If you're like me and you love turn-based combat RPGs with lots of guns and wish there were more of them, then you're probably already sold on Planetary Conflict. If not, then let me tell you that Planetary Conflict is a whole lot of fun. The fact that you don't know where your enemies are adds a lot of suspense and it keeps you on your toes. Will you risk using all your AP on movement or should you just edge forward in case you need to fire? The system is kept simple and that's what makes it so much fun. There are a few kinks, like the enemy AI. Your enemies aren't very bright, especially when one of their own is standing in front of them. Don't be surprised if one of your enemies takes out their comrade because the shooter didn't step up and/or to the side before taking the shot. Still, Toge knew their game would be focused on combat and they did their best to make it really enjoyable.

While you can play without registering an account, the process is easy, and it's definitely worth it. Not only will you get to experience the great combat, but you'll get to soak in the great production values. While the actual in-game graphics are kind of so-so, the game does feature some really great art. During the movies that sandwich the storyline missions, and especially within the intro movie, you'll see some really awesome visuals. The character portraits, while pretty exaggerated, are really well done. On top of that you've got some nice voice acting. Just be warned that Planetary Conflict can be demanding on your system. If you have a lot of other tabs open, you might notice your browser locking up, so you might want to fiddle with the quality settings until you find what works for you.

Unfortunately there is a major problem with the game, and for some it will be a deal breaker. Planetary Conflict is extremely punishing on the solo player. If you're playing alone, you'll be okay for the first few missions, but soon any progress will slow to a halt. You can try grinding previous levels, but you'll probably get discouraged with that before you get far. The only other way soloing might be viable is buy getting the premium currency and outfitting yourself with the very best equipment, which is a turn off. So, if you really want to keep enjoying Planetary Conflict, you'll have to get some friends in on it. That'll probably mean linking the game up with your Facebook or Twitter. Those who don't want to do that or don't have those things...well, you're kind of out of luck. On one hand, it's understandable that Toge Productions would want people to play the game with other people, that's why they made a game like this. On the other, it's a big disappointment to be getting into the game and then suddenly realizing that it's over because you have no one to play with.

It'd be nice if there were more lower levels missions for solo players to grind for experience and money or if there was a way fill your squad with characters you controlled. That said, Planetary Conflict is still worth a try for the solo players. If you're already making a list of the friends you want to invite to play with you, then you're set. You'll be playing this game for hours. While you'll probably encounter some bugs, it's important to remember that the game is being routinely updated both with bug fixes and with additional content. All in all, Planetary Conflict is a fantastic game, but when it says multiplayer, it's really not messing around.

Fun, with lots of upgrade options, but I agree with the reviewer-- it would be nice to have more solo options for grinding. And the gradual energy depletion is really frustrating-- when you start to get into the game, you no longer have the option to play since you're too tired. A rest option would be nice.

But the main reason I gave it a 3 instead of a 4 or 5 is that I'm getting frustrated with games that require me to hand over social networking data to play or save. Is that really a 'casual game'?

I get what you mean, Tyrone. I've ended up setting up a lame twitter account just for these types of games.

The game's mechanics and leveling system are pretty fun, but there should be some friendly AIs or something.

Doh, I take back my social networking kvetching-- I just made up a Mochigames account and now I'm happily shooting away.

And there is the dueling option, even though it seems like I lose control of my actions when I choose that-- it's just an AI vs AI contest of gear.

It's like they took everything annoying about internet games and put them into one game. Wow. (Sign up for an account, linkage to social network, bugging friends, pay-for-buffs, etc).

I think I'll avoid it, based on the social network leveraging bollocks. I find that Facebook games and the like too often detract from both my gaming and my socialising experiences.

Generally I feel the same way, but I have a twitter account for nothing, so I thought that I might as well appropriate it for some of the gaming that I get exposed to on this site.

For example, I finally get to try Echo Bazaar. And hopefully I get to be more effective in this game as well.

Luckily for the game, there's an active forum/community for which experienced players are willing to be added as a friend to new players.

So if you read the forums and actively add people, you are bound to have a high level player added to your squad.

Essentially, this makes the game imbalanced as a lvl 41 player can be added to your squad making all missions a breeze.

Imo, the real attraction of the game is the potential real time pvp and not the current "non-syn pvp" that exist. Think of it as multiplayer fallout.

If you need a grind spots there is one in the bar, only 4 stars. its a bunch of aliens, much easier than fighting humans with guns. as long as you can dish out decent damage you should be fine. 3000 valas(money) + 500 if you kill everything for just 20 energy. i found this a good spot to load up on money to get better gear.

Just noticed you named your character Phineas Poe. That. Is. Amazing :) Love those books.

I can't find Planetary Conflict anywhere anymore. Apparently there are forum posts that claim that the game has been missing (possibly down for maintenance) since November.