Tired of being ridiculed for your little fists and being told that your best punch is as devastating as a cool spring breeze? NO LONGER! Expanding on the weird and wonderful concept behind Ra Ra: Extreme Star Boxing, Matt Thorson and Alec Holowka give you the dukes to take on an entire galaxy, heavenly bodies and all, in the action-packed Planet Punch where you control a surly star more than willing to pummel everything in its path senseless. 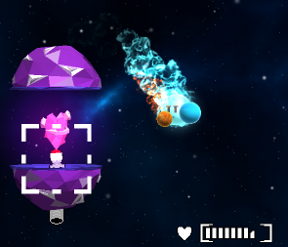 Use the [WASD] or [arrow] keys to move, and the left and right mouse buttons to punch out with the various planets your orbit will acquire. You'll only have one to start with, but as you play you'll gain more with different effects you can choose to equip at the start of each stage. Your goal? Survive and obliterate! Punch everything in your path and take advantage of the way many enemies and projectiles can be sent ricocheting around the stage, doing more damage and queuing up devastating chain reactions. Some stages will require to you smash everything within a time limit, while others will make you pick on someone your own size by setting you up against a boss.

Thanks to some beautiful design by Frederico Machua, Planet Punch is as lovely to look at as it is a blast to play. The whole thing has a bouncy, frenetic energy to it, and chaining up perfect destructive combinations is a satisfying thing to behold. Though there's definitely some repetition to the stages, with new elements typically introduced so slowly that only the boss levels feel truly distinct, give it a chance to win you over with its distinct style and premise and it makes for perfect cathartic action. Especially once you make your way to the Space Crab Nebula, which is where things get even stranger. Planet Punch is odd, no two shakes about it, but it's odd in an energetic, gleefully ridiculous way that echoes something you would have plunked endless quarters into an arcade machine to play, and we wouldn't have it any other way.

For those not aware, Alec Holowka is one of the makers of 'Aquaria' from years ago... just thought that was worth mentioning since his name wasn't linked anywhere.