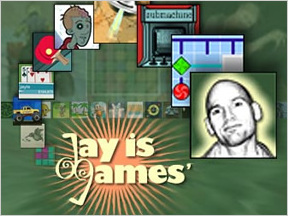 Dutch website Planet Internet just published a feature article about this site including an interview that author and JIG visitor, Wouter, conducted with me over email a few weeks ago. It is all in Dutch, so reading it may be tough if English is your only language (or you might try a translated version.) Still, it's very flattering to see my very first interview in 'print', and I wish to thank Wouter for the exposure and for the very kind consideration of requesting the interview to begin with.

Oh, and by the way, it was never asked, but some of my ancestors were Dutch. =)

The english translation makes you sound like Yoda.
"I gamer have always been"
"That me is frequently in demand,"
"You can hope only on what come will"
*lol*

It is always nice to see Samorost as the first game under the interview. Cheers Jay! (and where is Samorost 3, if it doesn't come out, I might have to go Emö xD)

Just read the interview Jay, as planet is my internet provider I visit the site almost daily. I hope it'll bring even more dutch fans to your site!

Anyway, cool to see you got some more publicity. I've enjoyed my time around here so far, so keep it up :)

Heh... The translator says the website is "Jay are games". I have friends from Holland, been to a few cities there as well. Good place, great people. Not so great weather. ;-)

"I want no kleren, only games."

I have no idea what kleren means, but for some reason I'm inclined to agree.

I have told my friends about this site. Soon it be famous, dont forget me Jay... LOL

Yes, that is what I used to say to my parents, when I was little, when asked what I wanted for christmas: "please no clothes, just games" =)

But now that I'm older I can use adult words like "kleren."

"please mom, no kleren, just games for christmas this year." ;)

Jay is Games: the game specialist
Published on Monday September 11 2006

To play a quick game every now and again. If you want that, you should definitely visit Jay Bibby's website. When he worked as a software developer he made a voicechat program for teenagers. In spite of its popularity the company had to downsize and Jay was out on the street. He decided to dedicate himself to the world of weblogs. In a short period of time he became a specialist on the subject of ‘casual games', simple but challenging computergames

When did you write your first online message, and to whom?

My *very first* online message? I can't remember, to be honest. Or do you mean as part of my blog? That was on April 19 2003, aimed at the people I was going to meet there.

What was the moment you got the idea to make Jay is Games. How did the site come to life?
I started the website as a personal blog. The first title was ‘Jay is.' It symbolized de hardship I had overcome after I lost my job. The blog was a place where I could put my thoughts, my experiences and projects from school. It was a fun time. But I got sick of talking about myself, so I searched the web for other topics. My love for innovative games kept occupying my mind, so that's what I wrote about more and more. Before long I encountered the cute and brilliant Samorost, and Viridian Room and Ferry Halim's Orisinals. I shared all this with my readers kept looking for other innovative stuff and that brings us to where we are now.

What's your story with computergames? Are you a real gamer?
I have always been a gamer. When I was but a few years old, I asked for games for my birthday and Christmas. I didn't want clothes, just games. Back then it was mainly board- and card games, and I still like to play those. One of my first electronic games was Mattel's Football game. Not long after that I got a Texas Instruments calculator, in the late seventees followed by the Magnavox Odyssey. After that I went through most big consoles

I'm pretty picky when it comes to games I like. I don't like violent games; I'm more into stuff that is fun for all ages. Also big stories that take weeks to solve are not my thing. With the casual games I found my niche, and I'm back to my roots.

Jay is Games focuses on the so-called ‘casual games'. Could you explain what that means, and are there similarities with the ‘big games industry'?

Well, a casual game is basically a card- or board game. Recently that term has been used for computer games with similar trades. Casual games appeal to a lot of people, and are easy to understand. You don't have to invest a lot of time to enjoy them.
At the moment we see that the gaming industry wakes up and realizes that the business-model of more and more complex games with astonishing graphics has its flaws. I believe that that awareness is there because the industry has problems reaching women gamers. Recent research reveals that women are more interested in casual gaming that in products of the industry. Another reason might be that there are a lot of people who like to play games but find the scenarios and game controls too complicated. The explosive growth of casual game development and the related websites proves this. Also the success of casual games for the Nintendo DS (Brain Training, Animal Crossing, Electroplankton) is proof that there is an enormous market for less complex games.

It seems that game developers tend to distribute their games for free nowadays, and the players have the option to buy additional chapters or levels. Is that a concept we are going to see more often?

I think it is. There is a huge market for these games and a lot is being developed. Just look at all the game portals where you can download games. I don't think free games will disappear however, as long as the makers can make money through advertising. You see another successful gaming model in Asia, where free games like Hangtame are being used to draw people to a certain Internet portal. Once they are there, players can adjust identities by buying items via a transaction model. This is one thing we are going to see more and more in the coming months and years.

Could you make a top 3 of games that impressed you recently?

People ask me that a lot, it's hard to answer the question. There are a lot of games that I like. I play a lot with my Nintendo DS, because there are a lot of new possibilities with that. As far as my own website is concerned, three games that blew me away were Super Serif Bros, Dice Wars and ZwoK! flOW. That's three, right?

Jay is Games just had its first game developers competition, how did that go?

The result exceeded my highest expectations. I was concerned that nobody would participate, but we eventually got were 21 of the most creative and original little puzzles I had seen in months. Kudos to everyone who entered.

You started reviewing games in 2003. What will Jay is Games look like in 2009, and where will Jay Bibby be?

One can only hope. But what you can expect in the weeks to come is a transition from JayisGames.com to CasualGameplay.com. It ‘ll be a community of game reviewers, who will continue what I started. I expect to see the best of ‘casual gameplay' being brought to attention and hope that my own efforts in game developing are good enough to be reviewed there!

A big LOL laugh out loud. I too remember telling my folks "no kleren more puzzles". Funny thing is as I got older I continued getting textiles and being told I was hard to shop for. Maybe I need to learn the word for puzzles in Dutch.

(and sorry for the delay in approving the comment)

Much better Tobester,
I didn't mean to be mean about the other translation (possibly babel fish at work?). It just made me giggle. Jay is the Game Yoda anyhow!

iks - I thought it was funny, too, and didn't find it in poor taste since it was the online translator that was doing the translating. =)

"me" - (I keep feeling like I'm talking to myself when I reply to you, er, I mean me, oh nevermind) - LOL about being called "hard to shop for". The online translator indicates "raadsel" as your preferred choice over kleren. ;)