Shoot first and ask questions later, largely because the hordes of the undead in Bryn Snoden and Jake White's low-res zombie action adventure indie game PiXLDeAD are more interested in gnawing on your skull than a little of the ol' parley. Though currently only in Beta, the first installment in this post-apocalyptic title is now available to download, and if you're a fan of conspiracy theories, flickering lights, and crowbar-on-zombie action, it's still well worth playing. And, I don't know... what are those, bubble-blowing wheelchair Doctor Octopus zombies? Yeah, okay. Alright. Who says 8-bits can't be atmospheric? 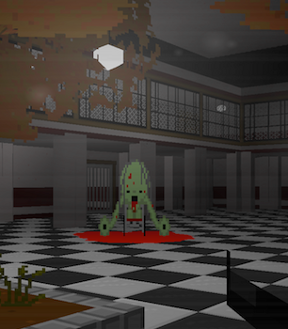 Use [WASD] to move around, and hold [left-shift] to run or [left-ctrl] to crouch, while [spacebar] jumps and the mouse is used to aim and attack. When you get more than one weapon, you can use the mouse scroll wheel or [1], [2] and [3] to swap between them. [X] is used to interact, whether its opening boxes or doors, or shaking down a zombie corpse for more ammo. You can't move when a zombie has hold of you, and your screen will slowly turn red as you take more and more damage, though in this case time literally heals all wounds since sucking your thumb somewhere safe for a few moments replenishes your health. If you do die, you'll be booted back to the start of the last area you transitioned into. As the game begins, you're apparently being evaluated for membership into a post-apocalyptic society by the blonde woman monitoring your progress on your head-mounted camera. A routine run for supplies into an abandoned warehouse leads you on a chase to an old hospital with a secret when you discover the clues to a conspiracy.

Old school may be the new, uh, new school these days, but even working with simple sprites PiXLDeAD manages to pack a lot of atmosphere into the experience thanks to heavy use of lighting and a fantastic, tone-setting soundtrack. For the most part, its simple throwback gameplay works well, though getting stuck on scenery or grabbed by the silent zombies can be frustrating. The game is at its best when blending in story and subtle world-building with its action, so it's sort of disappointment that the last third of the game is such a long slog through bland corridors just popping zombies one after the other. By the end of it, the tension was somewhat lost on me as I bulldozed impatiently down hallway after hallway, snatching up keys and just trying to get through it all as quickly as possible... only to be hit by a big, fat "to be continued" just as it seemed like the story was really and truly about to begin.

The game raises far more questions than it does answers, chief amoungst those being "who the heck are you, what's happening, why am I carrying around all these toys, and am I going to get a vending machine for all these coins at some point?" I wouldn't call it scary so much as a zombified spin on classic first-person shooter adventures, and despite my quibbles, the whole story is just enough carrot over stick to keep me glued in place from beginning til end and eagerly anticipating the next installment. Which, hopefully, will start filling in the pieces in a big way. Our blonde cohort doesn't even have a name. Can PiXLDeAD follow through on its potential? That remains to be seen, but potential (and zombies, and the shooting thereof) it does have in spades, and is well worth the hour or so it'll take you to blast your way through to the end of the beginning.

First impression - literally, since it kicks in before you have any chance to enjoy the very good combination of graphics and audio: the controls are AWFUL. Response to the keyboard is awkward, but the mouse response is outright terrible. Half of the time nothing at all happens, and when it does, the turn rate is painstakingly slow.

What I've seen so far looks really promising, but when it takes you ten seconds to do an about face (with green nasties breathing down your neck), the gameplay completely destroys the sense of submersion.

Please fix! Oh, and an 'invert mouse' option would be the cherry on top.

Wow, I'm sorry you had so many control problems LuckyDee. I had zero issue at all, so maybe e-mailing the developer your OS and other info might help them troubleshoot? The play was seamlessly smooth for me.

I was already kinda expecting this, but if life has taught me anything it's to complain first and apply common sense later :)

What strikes me as strange is the huge discrepancy between the response of the keys and that of the mouse; it responds pretty well to slight movements, wobbly to normal use and not at all to fast (ie typical FPS) use. For the record, I'm running WinXP, all basic hard- and software. I really hope there's an easy way to fix this, since I'm very eager to give this a proper shot.

Finished it on another computer, and despite a lot of little flaws and bugs, it's a really good game; very engrossing, high tension atmosphere, makes you just want to keep on going. Gimme more!