Pixel Rooms is a room escape game born from the combined talents of Urara-Works and Skipmore. You might recognize those names from the utterly amazing mobile RPG Fairune released not too long ago. Pixel Rooms goes several steps beyond the usual mobile escape setup, treating you to puzzles and stages that bend the rules in creative new ways. It's more than just doors that need unlocking, it's like a series of mini-puzzles from Hapland or Grow! 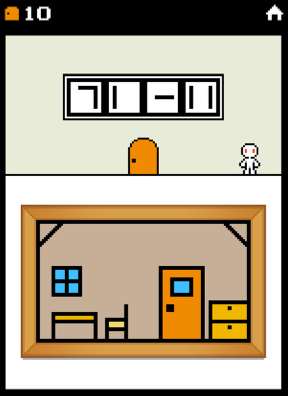 Pixel Rooms stars Mr. Pixel, a mysterious pixel person whose sole purpose is to head towards open doors. Your job is to make sure he can actually reach those doors. Sometimes it's a simple matter of unlocking the exit. Sometimes it's a little dark and Mr. Pixel needs a light. Maybe there's a small lake to cross, or the door is high atop some boxes, or a slot machine stands in the way. By tapping, dragging and otherwise manipulating each scene, you can make it so Mr. Pixel can reach the goal.

Pixel Rooms is a simple take on the escape game genre, but it's done with a charming style with puzzles that are much less stuffy than most games on the market (we're looking at you, almost every game with "100" in the name). The only downsides to Pixel Rooms are side effects of it being free: there are ads, it's a bit short, and there are social features placed prominently on the screen. No biggie, really. It's a very small prices to pay for a few dozen creative levels of puzzle solving and room escaping. And once you're done, it's speedrun time!

Unfortunately for me, my phone can't handle room 21 since it can't handle 4 fingers touching it at once. It's a pity; I was enjoying it.

Gone for any speedruns, SonicLover? I'm curious to see if you can secure a high spot on the leaderboard. :-)

I want games I can play on my Blackberry Playbook.

Not everyone is using an Apple product, and not all Android tablets can use the Google Play store. That leaves Amazon as the last option for acquiring decent apps.

Very creative and cute game. Too bad I don't think level 12 is soluble with my device, a galaxy note, nothing happens at all. I thought I might be doing the wrong thing but it's in agreement with the walkthrough.

Diego, I had to actually bump my device on the bottom to get the effect.