For fans of frenetic top-down arena shooters with a retro aesthetic, Pixel Purge by Epic Shadow has plenty to offer. The fictional land of Pixela-RT witnessed years of prosperity. Now, a dark portal spews forth endless waves of Space Invaders inspired monsters intent on destroying all that is good and pixely. Luckily, volunteers from across the land take to the sky in small white spaceships to fend off the menace. Endless waves of enemies face down your small white ship on an apocalyptic top-down battlefield.

Beyond an overblown opening cinematic, the story disappears in favor of pure blasting. You control your ship with [WASD] movement and mouse aiming, allowing for strafing and precision avoidance. Enemies approach from all sides of the arena constantly. Each one you blast awards you points. Collisions with the invaders drain your health bar, which ends your quest for a highscore. The game starts out with a storm of basic enemies, and the longer you survive the larger and more dangerous they become.

Pixel Purge isn't simply a bare-bones survival shooter though. Each destroyed enemy drops "pixels" as a form of experience points. Gather enough to level up your ship and spend a skill point in one of eight attributes. The attributes fall into four categories: Offense, Defense, Bullet Effects, and Score, allowing players a small degree of customization. Along with dropped, temporary power-ups, gathering pixels for upgrades becomes a necessity to survive. As the fray becomes swamped with different enemy types weaving in and out of your attackers towards one more level-up becomes a white-knuckle affair. 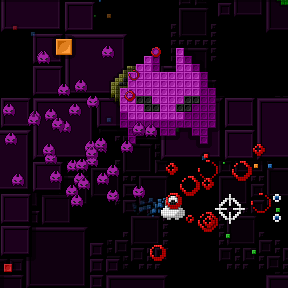 An unlockable bestiary and trophies offer replay value as well. After defeating a certain number of each type of enemy the game reveals their stats and behavior. Large scores and avoidance perfection awards trophies for bragging rights, and a full set of trophies gives bonus skill points at the start of a new round. Beyond that, a highscore is the ultimate goal, with chain multipliers and massive invaders to fell.

Analysis: Pixel Purge looks great. The unique spin on the retro ascetic keeps enemy types clear when gameplay speeds up to the max. The battleground itself looks eerie, with lightning effects and particle enemy explosions keeping things interesting. Those looking for a narrative or ending will be disappointed that the intriguing atmosphere adds nothing to the story, which itself only provides a context for this shooter.

The gameplay is also great, but falls short of perfection. The upgrades themselves seem unbalanced. The fast pace eventually makes health recovery upgrades obsolete, and everything moves too fast to show if upgrades to bullet effects make much of a difference. I would have liked to see more inspired trophies too, as many are simply grinds towards larger multiplier chains and scores. However the core gameplay works great, and makes grinding for a spot on the leaderboards worth a try.

Despite its flaws, Pixel Purge is a great example of the arena shooter genre done up in a nice pixel package.

Personally, I thought the best part of the game was Galadriel's introduction...

I kept dying and losing everything. I dislike that.

Reminds me of uh... I don't remember. A game that was about walking around killing multi-colored blobs with you huge sword. Lot's of achievments and stuff. I believe there was an achievement called "it's only fun when it's frantic". Which applies to this game as well!

The game was "Amorphous". I had the same thought, in fact.

Not bad... I really wish there was an auto-fire option, though. XP Especially since holding the mouse key doesn't shoot as fast as tapping.

The main problem with this game is that the difficulty level of the enemies is based on your level.

I mean, on the surface it seems like a good idea, but it seriously discourages leveling up. At level 1, I'm much stronger than everyone else; at level 20 or so, I die pretty quickly. Sure, you also get the burst attack and the health, but I don't really think those make up for the difficulty. If the difficulty increased at set times, it would encourage you to level up and make you decide between getting combat skills to survive now and getting the leveling skills to be strong enough later. As it is, the magnet and pixel skills are really worse than useless, because they only make the game harder for you.

On a related note, the disparity between the utility of the skills is pretty bad. Firing speed and spread are good, but penetration and criticals have very little effect. Healing is sort of borderline; it's useless for the first few levels, but at level 4 or 5 it jumps to marginally useful.

Also, there needs to be auto-fire.

It depends on how you play the game. If you're going for achievements, magnet and pixel upgrades combined are extremely useful, for two reasons. First of all, two or three of the achievement-nabbing baddies don't even show up until you're past level 18. Second, leveling up automatically heals you to full health. With full Pixel and Magnet Power ups, you can focus on dodging and staying alive until the next level up comes. Criticals become somewhat more useful later on as well, as the extra damage adds up with a higher fire rate and shot count. Piercing probably helps dealing with the mobs created by the brown, circle shaped enemies, but I didn't see much of a difference there.

Agreed, nice idea but it feels like it wasn't play-tested for balance. The only reason I continue to replay the game is that I hope to find a different way of playing that makes the game more reasonable. However, ultimately it's just a big mess and as much as I like the achievements and the action, it's not quite balanced and it's enough to make me look for other games. Amorphous is a fine game and a much better incarnation of this type of play.

This game had the potential to have a lot more content than it had. Take the prologue for instance. It was pretty sweet and made the player want to try to beat the game to see more of the story. But since the developer decided not to add another cutscene every 5 or so levels or make an end to the game, Pixel Purge fails to make the player want to keep playing. Kudos to the idea, though :)

There IS an auto fire, just hold mouse button and Ta-da!

Hey everyone, thanks for the feedback on the game!

I'm Porter, co-developer of the game. We've read all the reviews on ArmorGames, and I just went through all the comments on here. We agree the game fell pretty short on balancing, and I'm happy to let you all know that over the weekend we updated the entire game to be FAR more balanced. Piercing is now extremely effecting, health recovery is much more powerful now, and the other skills were adjusted as well.

While I can agree that leveling the difficulty of the game based on the players level is probably not the greatest way of going about it, I do enjoy trying to find a build that lets me get far. In the future, we likely won't use this mechanic anymore, but this was a test-run and we feel it works decently. I won't argue that it could have been much better without it though.

As for the game lacking content, agreed. As a game, this was originally supposed to be much simpler. If we decide to do a sequel, the story will be far more integrated, there will be an end, and there will be a lot more content.

Anyway, the newest version V.1.1.0 is going to be out soon, so pick your favorite site and play it there, there's a ton of fixes and balancing. Thanks again for all the feedback on the game, much appreciated.

Love this game. I'm totally addicted (and I really should be doing other stuff with my time; too bad). I was addicted even before the new versions, which are even better. The thing that puzzles me most about this game, though, is the regeneration. I know each level reduces it by half a second. But I don't know what that means. What is it that's gone down by a half a second? At level six it's going to be 3 whole seconds less. So, some time interval has been reduced. But an interval between what two things? It takes three seconds less to do what? At what is the original interval? Have I gone from five seconds to two, or from four to one, or what?
Also, it took me forever to figure out how the chains are calculated. It took me quite a while to figure out how to get that trophy.(I know, I'm thick.)
Otherwise, great game!

I appreciate that the developers respond to the feedback! As a result, I was willing to continue playing and it does feel a little better. Still, it's highly frustrating to get to the same part of the game and be swamped with 6 giants converging on your position with 2 shields blocking you and a seeker homing in. Max firepower or firepower + healing bonus doesn't help much. My average score is higher, but it still reaches a consistent plateau when I focus on offense and advancing.

I like the concept of this game, but maybe this particular one is not for me.

Any playing tips for reaching level 20?

Update to the last guest post I made above.

I discovered that if I played the most recent update, somehow I'm able to progress further and 'win'.

I maxed regen first, and it heals fast! I developed spread shot up to 5, then maxed shot speed. Then I started boosting pierce and critical, although I didn't get far with those. When I finally died, I was over level 24 and completed all those trophies I was missing.

Now hopefully the story will develop a little further, and maybe something new will come along for the fully-trophied to accomplish.

[We have updated the links in the review above to point to the most recent version. Thanks for pointing out there was an update available! :) -Jay]