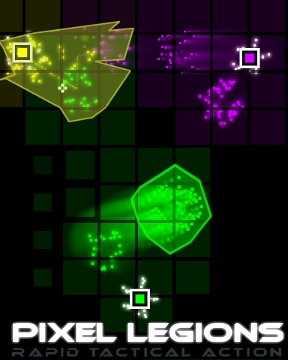 This can't be right. I've always heard that "War is hell", not "War is a real-time battle of twinkly pretty neon lights". Hmmm. Well, in Pixelante's Pixel Legions all that matters is how fast your fingers are in this simple game of pixel warfare. Spawn pixels and swarm the enemy's base, trying to take it out before they take you out. It's similar to Galcon or Phage Wars in execution, but features an open playing field you can move about freely.

Your base periodically spits out clusters of pixels, which you can then use to deliver what the French call a smack down upon your opponent. Simply click on a group of pixels to select them, then click where you want them to go. Or, click and hold on a group and drag the mouse to draw a path for them to follow. (You can also move your base like this, though it moves much slower.) When two clusters of allied pixels come together, they automatically combine. The last base standing is the winner, and as you progress you'll find your enemies growing in number. I hope you're feeling quick. Rule One: CARDIO.

"So," you say, "how strategic is this game?" "Mmmmnnnyeeeeeaaaah." says I, waggling my hand in a weak sort of way. Actually, it largely depends on how cool a head you keep under pressure, particularly when facing multiple enemies, but rapidly flinging your troops into enormous swatches on the screen will still get you pretty far. Later levels start to incorporate obstacles in the terrain to contend with, and the difficulty ramps up considerably. There's no story to be had, so how much enjoyment you get out of the game largely depends on how much you like the flashy visuals and pick-up-and-go gameplay. It's great if you're looking for something fun and fast-paced to fill an hour or so, not so much if you're looking for a sweeping epic. For frantic fun, Pixel Legions is a twitchy click-fest that proves one thing; pixels are dangerous and must be stopped! No more computers; it's back to stone tablets for me.

Really fun game. Lags horribly in the later levels, though.

Yeah, it really did lag my computer. Does anyone know what the white circles do in the level "immunization"?

Not sure, but nothing bad.
Anyway, "Longer Live the King" was a bit too tough for me, since I am blocked in and cannot move my base past the treadmills, and I like to put myself in a corner and wait for everyone else to kill themselves.

Anyone got some tricks on that?

Accidentally dragging the mouse out of the game field with the button held down seems to result in being stuck in some sort of permanent select mode. As in, the white line won't go away and so you're unable to move groups around effectively as they just keep following your arrow wherever it goes. The game was fun until I ran into this bug. I tried again, but this is such an easy bug to run into that it kind of kills the enjoyment.

Ran into the same bug as JIGuest. Yeah it gets kind of annoying to try and play after you hit that bug

I totally agree, the white-line-is-always-on bug really really kills the fun. You can't employ the pixels as effectively and it totally kills a rather enjoyable game

Good news, I found a quick-fix to the persistent line bug! It was frustrating me for a while as well.

I really dig the game, but the weird select bug should definitely be fixed. I had pixel blobs going all over the place, trying to follow my cursor, and could barely keep track of any of them. Makes the later levels unnecessarily difficult.

It occurs to me that this is exactly the kind of game that would be improved by existing in an HTML5 canvas rather than Flash, since the bug is probably tied to the fact that Flash is rollover dependent. I don't think HTML5 has that limitation.

Would have been fun if not for the aforementioned bug which makes the faster-paced levels unplayable.

Hi guys, sorry about the path drawing bug but unfortunately that's an OS/browser bug so in the future I'll just have to offer alternative (and inferior) controls for incompatible systems.

Mac users: Please direct your complaints to Apple. As consumers you're the only ones who can force them support things properly.

As for HTML5, well that's just silly. Anyone who wants to try replicating this game in Javascript across every browser is welcome to, but I sure won't envy them. You think the line drawing bug is bad...

The drawing bug really wasn't a problem once I realized I could fix it just by clicking offscreen and dragging back on.

Unfortunately I don't think Apple will ever be better about flash, because the company position is that it's a 'dying platform.' A shame.

pixelante, thank you for that nice game.

About that drawing bug, I'm no flash developer and intend to never become one, since IMHO apple is right, in the long run flash *is* a dying platform, dying to open standards and inbrowser implentations. I can thus not give you in detail hints.

But for javascript there is a special API call you can do on mouse down events that will "bind" the mouse to you. Meaning you will be sent a mouse up event even if the user dragged the mouse away from your objects first.
( http://www.java2s.com/Code/JavaScriptReference/Javascript-Methods/setCaptureExample.htm )

I suppose that flash has something similar, as I've seen plenty of games catching mouse ups when out of screen (they didnt use the flash mouse line drawing api tough)

pixelante, I am on a Windows XP machine with Firefox 3.6.3 and it seems that the same bug is showing up. What browser would you recommend?

The mouse bug doesn't show up if you put the game in a tab by itself (i had that problem whenever it was embedded). this also lets you resize it if you want.

I believe I have managed some sort of workaround for the line drawing bug, if anyone with that issue wants to try playing the updated version on Kongregate (http://www.kongregate.com/games/Pixelante/pixel-legions) please let me know if it helped.

fuzzyface >> Yes, Flash does have mouse up events when not in the screen, which is what I relied on to allow people to draw big sweeping lines off screen. This is the feature that some browsers seem to take issue with. This is the nature of browsers, they never work the same way even when there are standards.

Also, Flash is a free open format now and continues to expand its influence even with Apple opposing it. Jobs can yell and scream (and lie) as much as he wants but his claims don't have much basis in reality. Adobe pushes development tools, Apple is the one who pushes closed platforms (hence why they won't support Flash even though it's on 99% of computers and Android is embracing it wholeheartedly).

pixelante, thank you for trying to fix it.

My and others opinion toward flash is not necessarily related to Apple or Steve Jobs. I dont care much about em, just used it in the flow of comments here. Its more based on the stands of the w3c. I believe SVG+JS (and Canvas) is better once it get adopted widely and while I agree that browser quirks on JS are still the horrors I'm confident as time passes it will get better. But this is all longtime projections, nowadays I can very much understand and support the decission to go with flash. But I also suppose jay isn't too happy about us having technilocial basic believe wars on his blog :) Likely eitherway one day both SVG/JS/Canvas on the one side and Flash on the other side both get outdated by something else we both can't yet imagine (which is certainly not silverlight)

The line drawing misbehavior is not an apple bug. This occurs on Linux as well. The adobe/flash platform, or just plain adobe incompetence is to blame

The line drawing bug is appearing on my PC too...

@Gnauga: In that level stay where you are because the base is on a power pixel plant which will make your pixels stronger and they will turn white. When a new group of pixels is made drag it across the base to activate the pixel power plant to upgade your pixels. And then let your pixels do what they want and voila! You win! Hope this helped.

I really liked this game, didn't lag for me unlike others, and had a lot fun for me.The music, colors and style of the game pulled me right in.

Jay which contact email do i send the email to, because there are three or four places to send an email? Help please and thanks in advance.

this game is awsome! but the game screams to be made into a multiplayer.