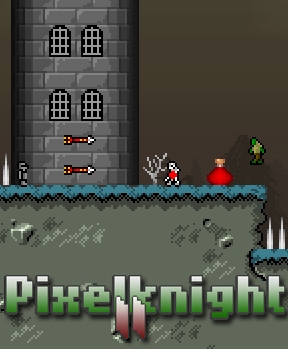 Somewhere out there is a vast kingdom that is made out of not atoms but pixels, and sniffs at such ideas as a third dimension or the art of war. When it gets overrun by evil monsters from another realm, it simply employs a valiant knight to set out and crack some netherworld skulls in the action/platform game Pixel Knight 2 from CodinSoft and Armor Games.

First, the compulsory 'brass tacts', which are also shown on screen shown you first start playing. Playing as the knight, you can run back and forth with your [arrow] keys (or [A] and [D]), jump with [W] or the Up arrow, and lay down justice with Space or [X]. The aim is to make it to the other side of the level, jumping across some low-challenge obstacles such as chasms, spikes and moving platforms, while taking out the monsters that storm you. Pixel Knight 2 is not a platforming game; it is all about action, with just some platform elements thrown in to up the challenge. The aim is to kill all the monsters and move to the next level. When you run out of health, you can restart at the beginning of the level, but your score resets, whereas the longer you stay alive, the most maximum health you gather (and keep, even if you have to restart a level). So the aim of the game is to set a high score by killing monsters and picking up treasure without getting yourself snuffed.

The enemies come in thick and fast. Actually, they are a bit timid at the start, but once you reach the third world they become mean and rush you in seemingly ridiculous situations. At first you are stormed by bats and shambling trolls (or something like that - to be honest, they look a bit like demented fur suiters to me), the pinnacle being a fireball-throwing demon and a lizard that loves to rush in. Soon, though, the stakes go up with shambling zombies, armoured skeletons and floating one-eyes monsters that I remember from some D&D manual many years ago. By the fifth there be dragons. To aid your heroic quest are different weapons that you pick up, ranging from bows and axes to boomerangs and vicious swords to some nifty stick-to-stuff orbs. 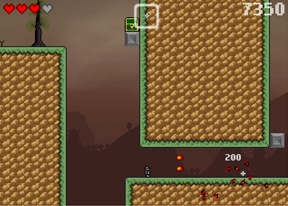 Analysis: If you have played the first game, you will find some familiar ideas, but an entirely new experience. The original had you sitting in the middle of a level and fend off monsters until the clock ran out. In the sequel you run through various worlds, beating the monsters and collecting treasure for a high score. There is no clock counting down against you, but the focus of racking up a high score is still front and centre.

At first there was little nice to be said for Pixel Knight 2's controls. They seem floaty, unresponsive and generally an ill omen to your monster-beating ways. But nothing a good night's sleep can't fix - literally. One day I am fuming at the clumsy controls, the next I am breezily leaping over bad guys and using the levels against them. Obviously being familiar with the levels help as well. This creates a different level of depth to the game: once you really crack it and manage to run through several levels without dying, you add up quite a few health hearts - which make a huge difference later on. Knowledge of the levels is also two-fold: on one hand they avoid ambushes, but you can also backtrack and outsmart the single-minded hordes. With a over-arching mechanic that wants you to get as high a score as possible, returning to Pixel Knight 2, instead of judging it in one sitting, makes a huge difference.

The visual side has a retro charm that can't be overstated in how understated it is. In fact, somehow the levels seem even MORE 8-bit than in the first game, which is odd and yet somehow not unappealing. It certainly sticks to its name like glue (except that, technically, knights were called such because they had horses - yup, in Medieval Europe owning a horse got you a title during war; it's like showing up today with your own tank). The design of the levels reminds a little of those old make-your-own-game titles like Gamemaker, as if the developers just used a tileset. Maybe they did. It doesn't hurt the game - in fact, it compliments it.

Finally, a tip of the hat to the soundtrack, which is both exceptionally well suited to the game AND changes with each world. Not nearly enough online games do this and yet it is such an important part of giving players a sense of progression.

At first glance many things about Pixel Knight 2 seem a bit underdone, but look close enough and it really takes in those things that made classic platform/action games great. Once you find your rhythm and figured out that the axe is best left on the ground, you'll be clearing the kingdom out in no time.

This has nothing to do with the game, but I'd be remiss if I didn't point out that it's "brass tacks," not "tacts."

Game is great, by the way.

Don't you mean 'brass tacks'? Or were you going for a play on that, like 'brass tactics'?

I'm fairly certain it was meant as a play on words.

I'm fairly certain this is a silly thing to care about. >_>

Is anything meant to happen after you die?
When I lose all my hearts the screen goes black, music loops and I have to refresh the page for anything to happen.
I'm running Firefox3.6.3 and Windows in case that helps.

The floating one-eye things are called beholders, I belive.

@ThenAgain: You're shown a screen where you can either continue from the beginning of the stage you're on, or quit to the main menu.

V2Blast:
Well damn. I thought there might be something wrong there. Having to refresh each time I die is seriously annoying.

The boss is nearly impossible if you have 5 health hearts or less, and 6 is barely enough. But what a joy when you succeed, for you can

"Leave this battlefield now and rest, you've earned it" :)

Hmm, actually, you can only get 3 health upgrades, so 6 hearts is the maximum. The upgrades are

While it's true that there are only 3 health upgrades, the upgrades are not "found" on any level. Rather,

I find the best weapons to use are the

Shuriken for its rapid fire rate and it's downward curve. Good for early levels with more cliffs

Bow for its dual shot that more importantly shoots up at a angle, so it's good for cramped battlefields with plenty of spikes.

The orb seems to be the most powerful, and because of its detonating power, can be used to set traps for those looking to thin the crowds

At least there are multiple control options available, even though you can't customize your keys. I've always been a guy who likes the jump key to the right of my attack key when using my left hand on the keyboard, so I would've preferred the X and Z function switched. Is it just me?

And the game designer is one of the coolest guys in the business ;)

After much frustration and curse words i finally beat the game. And even though i THOUGHT it was impossible i did beat the boss with only 4 hearts (I still had 2 at the end and never used the refill).