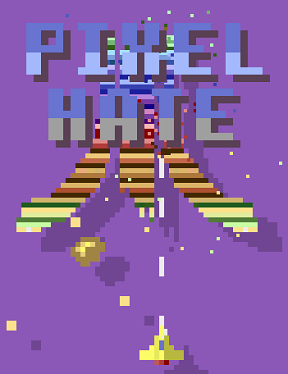 Pixel Hate, an arcade shoot-em-up from Arcade Bomb, has the kind of vague retro-ness that's hard to tie to any particular technology level. The title-screen looks like an ZZT game, the enemies are strictly Atari 2600, the soundtrack has the robotic edge of an early 90s arcade, and the flashy explosions remind one of recent bullet hells. Still, despite the mish-mash of elements, Pixel Hate is very enjoyable to play. Just use the mouse to steer your ship, left click to fire, and nab any power-ups that fall for more explosive strength. Shooting pixels off of enemies until flying objects literally fill the screen makes for simple and addictive gameplay, even if the gun overheats too quickly.

There is definitely room for improvement in the design: later levels can be hit with serious slowdown, likely due to the number of objects displayed. Also, the concept behind the level bosses is clever enough that it's a shame only the same sequence of three are given again and again. That said, Pixel Hate is oddly compelling and should be enjoyed by fans of the genre. Turn up the sound and prepare to relive a period of gaming history that never quite happened before!

There's something very wrong with the starting screen of this game. I clicked somewhere on the screen below the middle, I think) and it opened a never-ending stream of new tabs which ended up crashing my browser. I tried again and it happened again...

[The game is keyboard controlled. Don't click on the start screen. :O -Jay]

I don't know whether I heard right... but I agree: I love medieval fire power!

the start screen isn't a problem for me, mostly because I can't even get there. how long is the trippy color flashing thing supposed to play? because it's been playing for over 30 seconds...

[It shouldn't last long at all. Try emptying your browser cache and reload the page. Sounds like the initial loading got corrupted somehow. -Jay]

For some reason the preloader ads continually play in the background as I'm playing the game. The controls and everything work fine, but I keep hearing ad after ad after ad.

That was really nifty! Good way to waste 10 minutes. I think I was having the same trouble a few commenters were, because once I opened it I heard never ending commercials playing in the background, but I couldn't find them playing anywhere to close or mute! The anti-smoking commercial just got subliminal. :)

I just uploaded a new version that should fix the preloader ad script repeating. It also fixes the repeating tabs opening if you click on the title screen.

Froze up during level 4

just killed more than 140000 pixels, died in level 6.
Does anyone know is there is a last level?

Frozen during level 6. The GUI has disapeared.

The review says "even if the gun overheats too quickly".

It wasn't clear to me until I played for awhile, but the gun overheats quickly when it gets too powerful: the yellow "F" (Firepower) powerups also increase the rate the gun overheats. Get too many, and the gun essentially overheats immediately. And Firepower lasts forever, unless you are killed; then it drops down one level.

So the strategy becomes

get enough Firepower to do serious damage, say, 7 or 8 levels, but then dodge those yellow "F"'s like the plagues. Try not to get too close to the things you shoot, lest an "F" fly out and hit you. Then at a convenient time when you don't have shields (I like to do it at the very beginning of the levels, because shields always go away then and there isn't too much action yet), you can deliberately lose a few lives if your Firepower is too high, until it gets down to a manageable range. The danger to avoid is getting your firepower so high that you don't have enough lives left to get it down to a useable level; when that happens, the pixels win in short order.

Review also says "later levels can be hit with serious slowdown, likely due to the number of objects displayed." Like others mentioned, I think it's due to the banner ads playing in the background every so often, at random. (Sometimes it helps on the hard levels, though...) :-)