The pixel is mightier than the sword when Social Titans blends genres with a healthy dollop of charm and pixels for the addictive match-3 puzzle defense iOS hit Pixel Defenders Puzzle. Your ranks of heroes depend on matching and merging coloured blocks to create warriors. While ordinary heroes created from basic matches might be fairly weak, however, creating three or more identical heroes together the same way you'd match pixels means they will combine to create the next tier of warrior in that class. From necromancers to vampires, rangers to highwaymen, it's like some great, geeky circle of life. Except instead of an adorable, sassy lion cub who learns a lesson of life and responsibilities, you get a vacant, silent idiot of a VIP who wanders uselessly around a battlefield in easy reach of boulders thrown by burly orc soldiers. Sigh. Can't win 'em all. 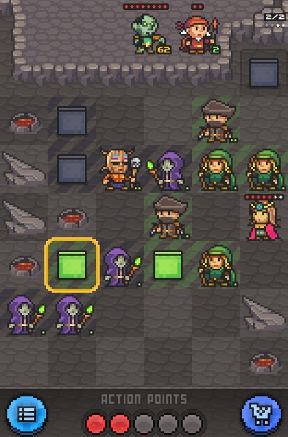 The game has two types of levels, standard turn-based defense and puzzle. On defense stages, you're given a VIP you can't control to protect, and a bunch of waves of enemies to defeat before they crush that VIP to dust. The number beside an enemy as they trundle in at the top of the screen notes how many turns are left until they attack, and you need to take them all out before they smash your VIP to win. Tap to place coloured pixels on the battlefield, and three or more matching pixels horizontally or vertically will combine to create a hero. This nets you some Action Points, which is important to do since Action Points are shared between all of your fighters and are used to attack. Each created warrior only has a finite number of uses, however, marked as small dots above their heads, and when that runs out they vanish to be replaced with an obstacle on the field that will prevent you from placing anything there unless you find a way to remove it. If the board fills up before you crush your foes, you lose the level. Puzzle levels have essentially the same rules, but the object here is simply to place a finite amount of pixels in such a way that all the matches you create eventually clears the board.

Pixel Defenders Puzzle is one of those cute little mobile games that really seems to get the whole point of being a cute little mobile game is to be instantly playable and fun whenever you get the chance. It isn't a game with a whole lot of depth, with a core set of rules and gameplay anyone can master, but neither is it exactly shallow when it comes to strategy and difficulty. Plop pixels without planning and you'll quickly wind up with a uselessly cluttered board and a VIP one turn away from being a red smear on the landscape. The lack of a story or any sort of upgrade tree to drive for means players looking for more than a pick-up-and-play title good to pass the time with might not find enough here to hold their interest. Especially if, like me, you're a nostalgia-blinded nerd who is disappointed one of those pixel combinations doesn't summon Captain Planet (or Bart's pigeon rat). But with a fantastic pixel-art style and effortlessly addictive gameplay, Pixel Defenders Puzzle is an easy recommendation.

Ooh, I like this one a lot! Though I was honestly a bit fooled by the use of the match-3 genre descriptor here. I was thinking along the lines of Puzzle Quest, but was pleasantly surprised during the tutorial.

I think games like this (and like Triple Town before it) should be called "combine-3" games instead, because these types of games really share nothing in common with the bajillion match-3 games in existence. And it seems we're going to be seeing a lot of new games come out that use this new match-3 gameplay twist in unique and exciting ways.

[Update: I've just created a new combine-3 tag and added it to the 3 games we've featured that utilize this new combinatorial gameplay core mechanic, including this one. -Jay]