Puzzle games are good brain food, and this recent addition to the iPhone library is no exception. The first mobile app from EatonLabs Ltd., PixBlock, reincarnates a well-known kind of logic puzzle that puts your pixel painting logic to the test. It's picross, folks, and it's a stylish and simple implementation that makes playing as easy as scribbling on a piece of paper. 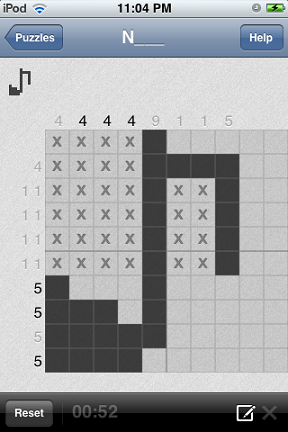 Upon starting the game, you are greeted by the Space Invaders-esque alien with options for puzzles that range from a 5x5 grid to a more challenging 10x10 grid. Pick a size and go through the list of puzzles, the titles of which are hidden until you complete each one. At the top and sides of each puzzle are columns and rows of numbers that give you clues as to which blocks to fill in. So, if you see "2 2" next to a row, that means two sets of two squares need to be filled in that row, with at least one non-filled space between. Place pixels where they belong and 'x' out locations where they do not, all with a few taps of the screen.

PixBlock is as easy to pick up and play, just like your family's favorite bathroom past time, sudoku. The game contains over 150 puzzles (32 in the 5x5 category with the rest sized 10x10) to fill every free waking moment you have in a day. The challenge level isn't too high, and the lack of larger puzzles can be a turnoff for die-hard picross fans, but you can always work your fingers numb re-solving puzzles to perfect your times, showing your mastery of logic for all to envy. You would have never thought that filling in little pixel boxes could be so entertaining and intellectually stimulating!

NOTE: This game was played and reviewed on an iTouch 3rd Generation. Game was available in the North American market at the time of publication, but may not be available in other territories. Please see individual app market pages for purchasing info.

I wish this was on Android.

It is bound to make its way to Android soon. This is the company's first game so they started out on iTunes since it already has such a wide user base.

I am hoping to port Pixblock to Android at some point soon, but I have been busy preparing an update for iOS that I have just submitted to Apple that takes the level count to 200! It will hopefully be available soon.