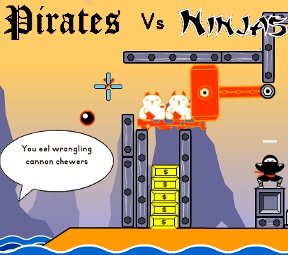 Pirates Vs Ninjas? Why can't pirates and ninjas get along? Why can't you crazy kids just join hands, or hooks, and sing a little Kumbaya? Why must you alternate through sixty levels of smashing, launching, physics puzzle madness? Your creators LongAnimals and Astute Game ought to be ashamed of you.

I mean, you start out every level with a ship that fires blustery pirate cannonballs or sneaky ninja grenades. You click to launch at different angles and power levels, with your goal the senseless massacre of all piratical or ninjatical... ninjaish... ninjatastic... ninjariffic life. You can use as much ammunition as you want, but the fewer your shots, the higher your score. And you persist in doing this, even when the opposing side has a hostage and your shots could put him in danger, even when the shots can ricochet off of objects and sink your own ship! HAVE YOU NO SHAME SIRS.

This violence has got to stop! Oh sure, you say, this is a cute, lighthearted romp with the kind of gameplay that made the Crush the Castle series such a success, with the enemy hostage twist of Sieger. And apparently the kids all think your rivalry is "cool" and a "meme" or some such nonsense. But what kind of message does this game send to all the impressionable pirate and ninja children out there? Think about that one. Think about it really hard.

Why are the ninjas in a pirate ship?

"But what kind of message does this game send to all the impressionable pirate and ninja children out there?"

Merciless slaughter of your enemies is great fun? Yarr.

3,664 Views
19 Comments
chrpa— Jayisgames needs your help to continue providing quality content. Click for details Hello, the newest Weekday Escape just arrived! We start (and end) with Selfdefiant's game; this week we postpone their invitation to Georgia and visit an old space...  ...