Pirates of the Stupid Seas 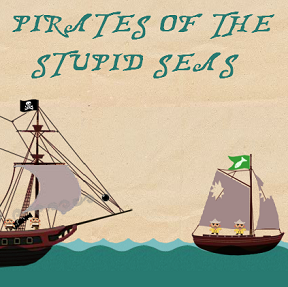 Can there be anything finer than sailing the seas, capturing ships, and looting treasure? Well, yeah, probably. Because, y'know. There's that whole scurvy thing. However, this be the tale of Captain James T. Stinkbeard, and the plundering of booty is all that he knows. So join him for some projectile physics sail-shooting action as you set off with the Pirates of the Stupid Seas, new from Backburner Games.

Pirates of the Stupid Seas has simple gameplay (shoot down other ships), but it's presented gorgeously, and has a decidedly surreal sense of humor: despite the subject, the tone is much closer to Sam & Max than Monkey Island. It's rare to find a physics shooter that's really as much about the arc of the projectile as its destination. The challenge doesn't pick up until quite a ways into the 25 levels. However, even if it's not that hard to do so, knocking guys off a boat with a cannonball never gets old. Put some shiver-repellant on yer timbers and check it out!

Play Pirates of the Stupid Seas

Level 24... The treasure is frikkin impossible to get.

Aim high and let the balls bounce around the ship deck. Sooner or later you will get it.

This game is not only beautiful, it's addicitive, great fun and funny to boot. Why are pirates of the stupid seas such good fun? Because they 'Arrrrrr'! :-)

I can't emphasize this enough: Keyboard shortcuts!! And I don't need to see the dialog every single time I start the same level.

I will agree with you on the dialogue every time .. it did drive me nuts also :)

clicking to target again would stop the whole scene playing out with all the hits, and instead went right back to my ship - sailed through it after that

I think the best and worst part was the difficulty of the game. Unlockables were odd too, but I guess that was the point to be pointless. Other than that, 5/5 game. Really nicely done.

Level 22 is killing me, I'm dead in the water every time. Is there some trick to killing off the harpies and cannons at once?

I beat the game, collecting all the treasures. None of them gave me much trouble (besides the last one, stupid hidey guy...). It wasn't until the end when I realized that the bonus treasures you get from collecting the rest of them in a region affect the hangout.

I was underwhelmed by them at first. The robotic fish was pointless, and the slot machine was a money sink. However, the final one perked my interest, seeing how it's the original video game reward:

Yes, that's right. If you complete the game fully, you get a swimsuit calender of all the female characters in the game. I'm kind of shocked how much skin they showed on the mermaid. That's not a shell bra, those are pasties!