When her stepmother (and it is always the stepmother, isn't it?) threatens to send her away to a finishing school, Lucy does what any girl would do: she runs away on the first ship sailing from port in an effort to find her father. She winds up getting embroiled in a conspiracy involving the most powerful trading company in the world. Will Lucy ever find her father and be able to afford a shirt that covers her belly? Find out in Pirate Princess from Moonpod (creator of Mr. Robot), a word game mixed with a puzzle title set on adventure through ye olde high seas. 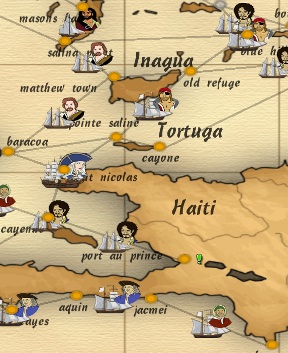 The bulk of Pirate Princess relies heavily on a Bookworm Adventures approach to gameplay, using letter tiles to spell words that damage an enemy. Yes, pirates are a literate lot who, in-between swilling grog and being swarthy, do battle by spelling words. Longer words do more damage and certain "pirate" words such as "sea" or "guts" do more damage and charge your cannons. Battles aren't turn-based, so spell as fast as you can to sink your opponent before they sink you.

The more enemies you battle, the more your reputation will rise, and Lucy's rank will eventually increase, allowing you to distribute points to increase stat scores and unlock new abilities. These battle skills range from increasing your attack to locking an opponent's word tiles in place. Just stay on your toes, since some abilities affect both you and your opponent. As you progress through the story you'll earn new, stronger types of ships to sail in. You'll also find exciting new ports with shipyards to repair your craft and marketplaces to purchase special items used in battle.

Analysis: I really enjoyed Pirate Princess, despite the limitations imposed by its gameplay. An unfortunate trend developing in games these days is the neglect of the story itself, leaving the finished product to limp along on the strength of its gimmicks. Pirate Princess instead offers up a complete experience with a genuinely interesting story that drives you to want to see its completion. The gameplay is simple enough that anyone can pick it up, and mechanics such as the "pirate words" help to keep you thinking instead of blindly firing off words like "stop" and "hugs" during battle just to shoot as fast as you can, ultimately dealing less damage. 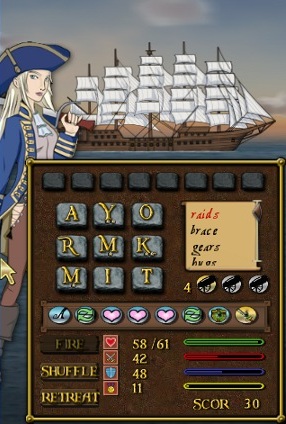 Of course, as to whether or not your definition of "pirate word" will jive with the game's, well, your mileage may vary. "Water", for example, is a pirate word, but "waters" is not. "Sail" is also one, but not "sailed". I realise sitting down and making a flow chart of what is and isn't "pirate-y" enough would be ridiculous and mostly impossible, but as it stands, the mechanism here doesn't always feel like an integral part of gameplay you can depend on. Once you do learn what words will shiver the game's timbers, of course, you'll be thankful for when you do have them pop up on screen.

Easily the game's biggest strength is its well-written (though not exactly groundbreaking) story. It has to be at least interesting, since five minutes into the game you've essentially seen all the gameplay mechanics Pirate Princess has to offer. Sailing back and forth across the same map fighting the same people in the same way gets a little... same-y. It helps that real thought has been put into the reason why you should be sailing to and fro. What starts out as a simple story about a girl running away from home winds up a tale of blackmail and deceit on the high seas.

The biggest problem I had was with the action buttons being placed too close together. While you're hurriedly trying to out-spell your opponent, it's too easy to miss by a few degrees and accidentally shuffle the entire board, including whatever valuable word you might have been about to fire. Likewise, accidentally hitting the retreat button instead of shuffling, which is doubly frustrating since it costs you gold and reputation, and is instantaneous with no option to confirm. No wonder pirates are always so foul-tempered.

While Pirate Princess doesn't feel quite as fleshed out as it could have been, it's still a very enjoyable high seas adventure. As a bonus it also features the most annoying parrot known to man. If you're hungry for a way to destroy your foes with the crushing power of your vocabulary while sailing around in a fancy hat, Pirate Princess will satisfy. Lubbers of land and fans of pants that lace all the way up your thighs need not apply.

Fun word game, with a surprisingly good amount of story. I would have liked mor different games to play though. Yar, me heartys!