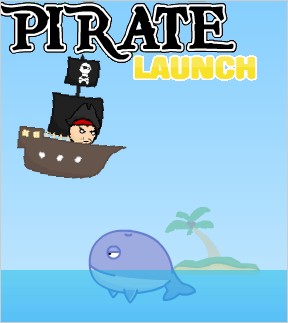 Arrrrr, not another one o' dem games where ye be tryin' to fly as far as ye can to the right? Is that what ye be moanin' 'bout? Avast ye filthy lubbers, I'll not be havin' with all this belly-achin' malingerin' on my watch! Thar be enough loot to make us all very rich pirates. We just need to get past the open water and the sharks, whales, and mines between us and it. We'll be needin' to take one o' these here cannons and turn it into a Pirate Launch.

Ye'll be wantin' to use the mouse to aim, and then hold that thar mouse button until ye be gettin' a good power to launch yer pirate with. Then ye'll be usin' the left and right [arrow] keys to rotate yer ship. Keep her steady lads and lasses, or it'll be Davy Jones' locker for the lot o' ya! The further ye go and the more flips ye do, the more gold ye will be gettin'. Dinnae be lettin' that gold sit around ye scurvy dogs. Ye'll be needin' that to buy upgrades that will help ye get closer to the big X that be markin' the spot!

Aye, the controls for this 'un may be a bit slippery for some o' ye land-lubbin' guppies, and it ain't as deep as Learn To Fly. But this here Pirate Launch can be a good time. Now go get me gold before I make ye walk the plank! Arrrr!

It is nice. finally arrived the treasure island and opened a treasure box. interesting ending.

I saw this yesterday elsewhere and played it for a while till I had full upgrades. But then I got bored trying to keep my ship afloat after getting just past the half way point.

Fun up to a point, but definitely felt like it needed more variety, items.. something. Otherwise it has no staying to play power. (At least for me.)

I got almost there on day 19 but then stopped playing. The third wheel upgrade makes the boat very hard to control.

More of a downgrade really.

I dunno, this game just seems like way less than the sum of its parts for me.

I've seen a thousand "shoot the whatever as far as you can" games before, and this brings absolutely nothing new to the table at all, and in addition, the theme doesn't make any sense at all. A sail for bounce height? Launch by cannon? Seagulls and bombs go faster and sharks steal money?

The only control is to rotate, which doesn't do anything but keep you from sinking, so your trajectory is completely at the whim of whatever objects you happen to hit (i.e. there is no real control at all).

Because of this, the cannon and steering updates are worthless - within 10-15 seconds whatever advantage you had with extra launch speed is gone, and steering doesn't do anything but make it twitchier to keep the boat flat.

I just found that it has all the "parts" of a game - graphics, sounds, controls, upgrades, etc., but nothing went together to make a game.

It's not great, but I did have fun while playing it. Short enough to make it worth the while.

Comparing this one with 'learn to fly' is almost unfair.

don't bother upgrading the wheel at all

All I get is "Register now to disable this advertisement, view comments and rate games" but there's just a blank area on the screen, no ad, no game. Pass.

[Edit: Sounds like you have a browser extension conflict. Works fine for me in all the major browsers, on both Mac OS X and Windows. -Jay]

I gave up after collecting all the power ups in 40 days.

I remember a game exactly like this, but with a penguin that was learning how to fly because when he googled penguins he saw that they were flightless birds. I only mention this because Ribs's comment takes note of the inability to control the trajectory. This 'penguin' game does, I don't know if i saw it when/if it was reviewed here, but if you are having similar dissatisfaction may i recommend you try that. I'll try to find a link

found it, seems it was pretty recent
https://jayisgames.com/archives/2009/05/learn_to_fly.php

Don't upgrade the steering (rotation) too much. It makes the controls too touchy to get very far. I just went up two levels and it was much better than all the way upgraded.

Ribs said everything I wanted to, so thanks for that :)

A very ordinary 3 mushrooms from me. And Gibel, Learn to Fly was linked to in the review.

I managed to reach the island on day 18. Here's how I did it:

Obviously, the biggest timesink comes at the beginning, when your raft is just too dinky to make it more than a few feet into the level, limiting the amount of gold you receive. I realized I could cut down on the number of days spent upgrading during this period by making money in a different way. Rather than try to make money by distance, a better way is to make money by doing tricks; you make a certain sum of gold every time you make a forward or backward flip in the air before landing back in the water. So, if you shoot the pirate straight up into the air, you have enough time to make a flip before landing. If you time it just right, and you position the pirate so that he has enough forward momentum when landing, he has enough speed to make another flip on his second jump. That's about as much as you can hope to accomplish in the first few days, though, if you can even make THAT many flips.

Basically, you want to continue making money this way until you've bought the first upgrade for every aspect of the ship EXCEPT the pirate himself; then you can resume making money by aiming for distance. From here on, I suggest you keep your upgrades even, buying each upgrade as it becomes available (since it won't let you skip upgrades). Although your ultimate goal is to buy the final ship upgrade and minimize water resistance to the point where it's almost nonexistent, until that point I suggest that you actually prioritize the mast upgrades, so you have enough airtime to pull off tricks and/or right your ship before landing. I suggest that you NEVER spend money on pirate upgrades, because the amount of money you make from collectable gold pieces is negligible, particularly since you want to spend as much time in the air as possible.

A lot of people here suggest that you don't upgrade the wheel at all, but I can't recommend that you follow that suggestion. For one thing, being able to spin faster makes it easier to pull off a flip before landing, but that's not the main reason you should get the upgrades. The main reason is that each of the obstacles in the level will push your ship off balance when you land on it, and if your wheel isn't upgraded far enough, you're not even going to have the opportunity to balance your ship before it lands back in the water, which is the only way you're going to survive long enough to reach the end. If you have serious problems with it, just one upgrade should be efficient enough to allow the ship to survive, but if you're aiming to lower your end playtime, it's better to train yourself to work with the tighter controls.

To control the ship in the best manner possible, keep in mind that all you can do is accelerate the ship in a clockwise or counter-clockwise direction. The ship does not automatically decelerate when left to its own devices; once it's spinning at a certain speed, it will continue spinning at that speed until you tell it otherwise (or, of course, until it hits an obstacle). The best thing to do is to set the ship spinning in the direction it needs to be balanced, but then, before it actually reaches the balanced position, tap in the opposite direction until it gradually slows to a stop.

Aside from that, just keep practicing flipping and balancing and you should make money at a steady pace. Once your ship is upgraded enough, just hitting a whale should guarantee you enough airtime to do a flip. Just don't try to do more than one flip per jump! You don't earn any extra gold for doing more than one, and it's too distracting besides.

Have to agree with Ribs. The increased rotation speed is fine if you're focusing on doing flips -- but if you're focusing on the actual goal of the game, which is to go as far as possible, more sensitive rotation is not helpful at all. Even with the maximum amount of upgrades, at which point more money is absolutely useless, I still got 3/4 of the way to the entirely-too-far-away target only to land with a slight angle and sink instantly.

Now, if they just added in a different upgrade of, say, Floaties, which would allow you to land more off-balance and not sink, that might offset the trouble that's caused by upgrading rotation. I think this game could be made to come together and balance; it's not irreparable by any means. It's just... not there yet, and I'm a bit disappointed in JIG that it's been featured.

Having never really got into these games I actually had a lightly enjoyable few minutes on Pirate Launch. I then tried 'Learn To Fly' as has been mentioned above and Learn to Fly is ace!

Back onto the subject of this game it is also fun but lacks a few key things that made Learn To Fly really good, namely the charm of the main character and the feeling of upgrades and what they mean to your progression.

I felt with LTF that each increase in glider and rocket somehow made the sotry and the penguin that much more mad-cap where as with Pirates it didn't give me as much a kick.

Having said that I really did have a good twenty minutes on this game and very much enjoyed them! Well done!

When I tried it it gave me more gold for multiple flips: 50 gold per flip. Trying to do a front flip then a back flip does nothing, however.