PicTune is an experimental sound-based puzzle game by IcyLime based around a unique mesh of sight and sound. In each level, you will be given series of tones that represent a picture on a pixelated grid. You can "scan" the grid in the four cardinal directions by using the [arrow] keys. As the scanning bar traverses the grid, it will play notes when it encounters a segment of the picture, lower notes playing for segments down and to the left, and higher notes playing for segments up and to the right. Beating each level will require you to guess the correct letter, number, symbol, or word secretly depicted in the grid (and note that answers may be case sensitive). There are 40 levels in all, and you are given three skips that you may use. Headphones are recommended. 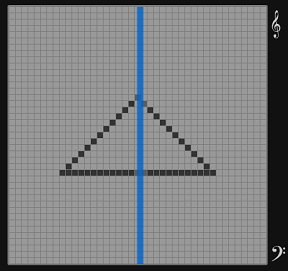 Just when you think developers of the world have run out of new ideas for puzzle games, something like PicTune comes along and stands out by getting a little weird. Reminicient of a more audial take on Z-Rox, PicTune definitely feels like it requires you to use a part of your brain not often tapped, and though it can be frustrating at first, the game has an addictive quality that cannot be denied. And hey, at the very least, it's probably the best video game adaptation of Daredevil that we could reasonably expect

A very nice (and strange) game. The beginning is pretty easy but it gets pretty tough. I'm stuck at level 25.

Well, some of these were really tough, but once I realized that answers could be full words and shapes it got a little easier. Here are the answers for anyone struggling:

I think the levels may be in a random order for each person.... I've had some of the answers, but they don't correlate with the order given here. That puts a whole new spin on the game.

I got one that was not even in the answer list. It was "cross".

A cross could be the answer to t, as well. But Here are a couple definitely not listed here.

As it's three thirty in the morning, and I'm starting to not be able to discern these sounds, I'm giving up for now after level 23.