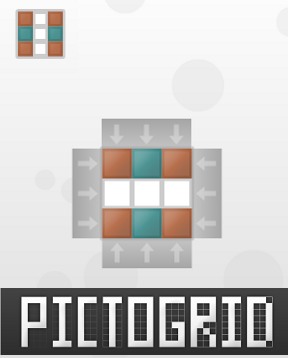 Some puzzles are so immediately daunting, like the Gordian knot, or a 500-piece monochrome jigsaw, that they intimidate all but the boldest from even attempting them. Others are so simple that after a few lackluster, perfunctory undertakings, the prospective puzzler begins to wonder if there is a point. Then there are those sneaky puzzles, the ones where the solution seems simple, such that the puzzler, in his hubris, imagines himself to be on the brink of victory. Then the chink in all his stratagems, so confidently conceived, is laid manifest, compelling a complete reevaluation of tactics. These puzzles are brain-benders in the most exemplary sense, and Pictogrid, a sliding-tile puzzle from Ian Lilley, is at its best an example of just this sort of puzzle.

Each level of Pictogrid takes place on a grid, as you might imagine. The goal is to match the playing grid with the picture shown in the smaller, model grid in the upper left. To do this, players should click on the arrow buttons framing the grid, as each arrow slides the adjoining column or row of tiles in the direction to which it points. Black tiles behave as you might expect tiles to behave in a real-world grid, stopping when they abut the grid's walls. Bronze tiles cannot be moved and behave like walls when other tiles hit them. Teal tiles move much like black tiles, and have the uncanny ability, when made to move into the edge of the grid, to reappear on the other side, like the ship in an old-school space-shooter. It's a simple number of elements Pictogrid lets you play with, and you really have to stretch your capacity for puzzley thought to solve successfully.

I suppose a really super clever Gus might balk at 40 levels as a mere puzzlicious appetizer, but I was so impressed by the difficulty that I lost the ability to count ("That was only level 29? How much harder can it get?"). Seriously, while the difficulty curve is kind and thoughtful, by the time you get into the thick, your mind is doing happy little calisthenics, glad for the mental workout Pictogrid provides. Most are of the sort where you think you see a solution, only to find later that no, you don't really see a solution, and that you must now try to re-see the solution from what you have learned. I didn't find this frustrating, but rather saw it as a clever surprise, an opportunity to see things in a fresh way, like a Zen koan, or a good plot twist. 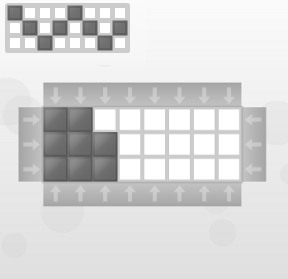 Analysis: Pictogrid pleases me greatly in the small number of elements it employs. A lot of puzzle games seem to hurt for new ideas only a few levels in, and so invent all kinds of new bits and gewgaws to extend the life of the game. This approach may or may not be successful, but Pictogrid is refreshing in its deliberate simplicity, using only three kinds of tiles and the same mechanic throughout all forty levels. I am glad that a game can get so much out of limited materials.

While there are few outright stumpers, there are a few levels that benefit less from supple insight and more from kludgey grunt-work. These are the levels where you can find a solution just by methodically sliding tiles around, so while they are not especially difficult, they are tedious and lack the ingenuity of the better levels. There are not many of these levels, but they are not Pictogrid at its best.

If a level is too difficult to bear, you can skip it. Levels are divided into groups of six, and you can freely skip between levels within groups, and skip between groups once you have completed five of six levels in a group. I like this feature, as it allows you to bypass a frustrating level while encouraging you to complete as much of the game as you can. Another difficulty-shaving feature I would have liked to see is an undo button, for it is discouraging to get well into a solution, make one irreparable mistake, and have to start over. Unfortunately that is the only recourse the game provides in such cases, and the inability to undo mistakes is sorely felt.

I like the soundtrack a lot, in the style of what I am beginning to identify as Newgrounds techno. Some people might find the thumping bass and drum machines a bit distracting for a puzzle game, but such people can easily mute the sound in game and replace it with a more soothing soundtrack from their own music collection, or play in blessed silence.

The clever folk who find that 40 levels is not enough of a challenge can replay previously defeated levels to complete them in as few moves as possible. There is also an in-game level editor to create and save original levels. For most people, though, the core game should be a perfect challenge. Few games can claim both challenging gameplay and simplicity of construction like Pictogrid can.

I found the music selections thematically inappropriate; something more relaxing would have fit better, I thought.

But the music is great in its own right. And "Newgrounds techno" isn't a bad label for it, because that's where the music comes from. It's apparently another UGC department of the site, parallel (or, in this case, tangential) to the games department. (Speaking of which, Pictogrid doesn't appear to be available on Newgrounds' games section. Curious.)

Any hints on Level 13? As for the music, I especially like the remix of the boss theme from Mario (or was it Zelda?).

Andrew: You're most probably thinking of this one, which is from Super Mario World. The same musician did one of a Zelda theme, too, but that one isn't in Pictogrid's BGM rotation.

Could also be this one, which is a remix of Smithy's boss theme from Super Mario RPG.

get the four corners right first

I got to Level 9 (Wave) before I stopped. (It's the one in the image above.) I didn't really try it, but I think that's the first semi-difficult puzzle...

Push all the blocks into a row along the top or bottom edge, then push each one vertically where it needs to go.

Yeah, the first one (Monstrous Turtles!) was what I meant. Thanks!

Gubbug, that level is incredibly easy.

just move all columns one notch down-up-down-up-... from left to right

empty 1 column, like the rightmost one, of grey blocks. that way you can always move one block there and then move it up/down to where you want it. Then simply start at the bottom: Move one block to the right column, move it down, then all the way left. If you there already are a few grey blocks in the bottom row, move these to the second rightmost column, then add a block from somewhere else through the right column. Then just work your way upwards.

can i have another explaination of 37 please?