"Picross" and "madness" aren't exactly terms you'd put in the same sentence too often. After all, picross is the endearingly childlike game of painting by numbers and not caring you aren't seven any more. But when such a game has 620 levels, three grid sizes and the ability to keep you entertained for hours, it transcends the realm of the casual and becomes... Picross Madness! (cue ominous music) Your job is to fill out tiles based on the number pattern next to the rows and columns, making sure there is at least one blank tile between two groups of coloured tiles. The finished picture will resemble a highly pixellated version of a familiar object, and it's always satisfying to take a step back from the grid and find that your mass of unruly tiles has formed a cute little boat. Or a lovely little house. Or a charming little skull. Because metalheads play picross too. 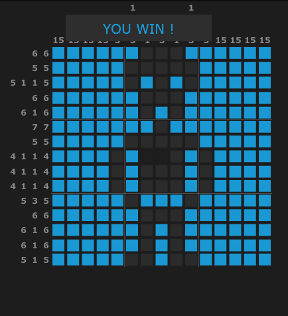 If you haven't played picross before, this game is the perfect way to get acquainted with it, because it has a simple 5x5 grid to get you started. More experienced players will probably find that the small grid quickly becomes too easy, but worry not, the large one will give you a headache or two. This is where the game steps in to provide you with a few handy tools: you can click and drag along a row or column to fill several tiles at once, and you can click any of the numbers on the side to turn them blue and mark them as already filled out. In the bottom right corner you can toggle between blue and black, so that you can also mark the tiles which are definitely empty. Last, but not least, all the levels are unlocked from the start, so you can be as picky as you like and leave the tough ones for later. With its hundreds of challenging levels, Picross Madness is certainly a game you can keep coming back to for a quick fix of simple, puzzly fun and a nice workout for your little grey cells.

I have found at least two puzzles that fail to meet this criteria and I am only three quarters of the way through "small". The game will only take what it considers to be the answer, but one of these has at least four logical solutions.

Still a nice little game, but this knocks at least one 'shroom off of the rating for me. More if this becomes a problem in the bigger levels and they start requiring more guessing than logic.

@Itt: Agreed, that's a real problem, and one that should have been avoidable. I believe the first level where it happens is Small #9 for anyone who wants to verify.

I grew up with these puzzles so for me even grid sizes of 15 x 15 is way too easy. The interface and color scheme is pretty slick but I lost interest after one puzzle. I really would have preferred grid sizes up to at least 25 x 25. Also I don't know about most of the puzzles because, as I said, I only did one, but I had no idea what I just drew (it was level 1 of large). It would be nice to get some indication of what the finished image is supposed to be (even if it is just a level title).

What, you can't recognize Iron Man on a 5x5 grid when you see him?

It sounds like this title is placing quantity over quality.

I agree that picross should only have one solution. Otherwise we're playing minesweeper. So this could be called Minesweeper Madness. Still, it's so hard to find enough picross that I find myself playing this anyways...

I love picross, but this doesn't seem worth my time. Multiple logical solutions is a huge no-no, and 15x15 is just miniscule. give me a 500x500 multicolor one.

I've done this kind of puzzle before, with a game called NoNoSparks. NoNoSparks is a lot easier to work with: when a line or piece of line is complete and blocked, the numbers automatically gray out. You can manually blue out the numbers in Picross, but for the most part I don't want to bother, because of the 2nd thing that's easier in NNS: there's a keyboard shortcut to switch between coloring blocks in and blacking them out. In Picross, you have to either remember, or switch by clicking the icons in the lower corner of the screen. Also, in NNS you don't lose lives when you misclick or otherwise misplace a tile. You just don't move on until you get it right. And the shapes are such that you hardly ever have to guess a tile.
Some strategies that work in both and make the tough puzzles a little easier:

Some patterns have only one solution, like 5, 0, 1 3, 2 2, or 1 1 1 on a 5x5 grid or 1 2 3 1 on a 10x10. Fill these in first.
If you have more than half the tiles in a row to be filled in, figure out what tiles will be filled in no matter what and fill in those.
Black out tiles that shouldn't be filled. This gets really important when the grid is too big to remember where the blank tiles should be. This often narrows down options sufficiently and you can figure out the rest.

Yeah, I quit after encountering the third puzzle with more than one solution. Also, a picross should never involve "lives" - if I mark an incorrect square, on my head be it: the game should let me dig myself into as big a hole as I wish. Add the awkward method of switching between marking and blanking, and this adds up to an interface that definitely put quantity over quality. :/

I like the "hearts" feature... but looks a little bit monochromatic for me... also, I agree, no one of this games must have more of one solution...

Here on Jay i find a really good page with nonograms from Japan, they publish a new one every sunday and wednesday... look for it...

They'd do well to do a serious cull.

They also sometimes don't show all of the numbers along the top axis - the highest ones are cut off. Needless to say that makes solving the large puzzles much harder.