It's a well-known fact that one can never get enough of Picma Squared. The browser release introduced us a stylish version of Fill-a-Pix (or, as some like to call it, picross meets minesweeper), and with the mobile release of the game, your digital logic puzzles are now portable! 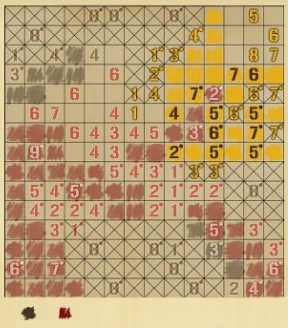 Picma Squared is played on a grid populated by a seemingly random set of numbers. Each digit tells you how many nearby squares are filled in, including itself. So, if the number is nine, you would fill in every block surrounding that nine, as that's the maximum number of squares that can touch one space. What you don't know, however, is which squares are not filled in, so with anything other than a zero or a nine, you'll have some logical deductions to make! Using the controls on the side and bottom of the screen, zoom in and out, pan around the grid, or switch between colors and marking types, all with a single tap of the screen.

Playing Picma Squared is easy, but solving some of these puzzles will be quite the challenge. There are over 50 levels to complete in the Android version (25 for NOOK and Kindle Fire versions), ranging from tiny to quite massive, and your progress will be saved if you exit a puzzle unexpectedly. No matter how daunting it looks, pick a spot and start applying some logic. Before you know it, you'll be staring at the colorful image of a kangaroo!

The Kindle Fire version claims to have only 25 puzzles. Hopefully, they plan on adding some updates that increases this.

Good catch. I downloaded the NOOK version, which promises the same 25 puzzles, and it looks identical. No indication of more content, unfortunately, which is sad. I'll change the review to reflect the puzzle numbers.