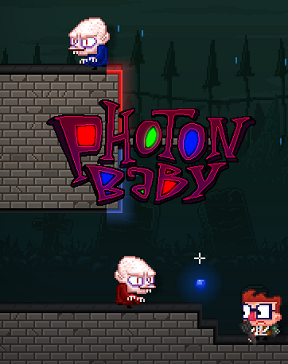 Doctor Photon isn't entirely sure why he agreed to babysit. He has a lot of research to do, and isn't particularly great with kids. At least the tyke seemed to settle down once he got his hands on that mysteriously glowing octahedron. But, wouldn't you know it, a vampire bat broke through the window and abducted both kid and crystal to the local spooky castle. Years of research could go down the tubes if he doesn't get that crystal back! And, uh, the tot might get hurt too! Grab your Photonic Laser Blaster, and get ready to bring a little light to the creatures of the dark in Photon Baby, a genre-busting platformer by Jeremias Babini.

Move the Doctor with [WASD], and move and click the mouse to aim and fire a photonic blast. You beat each level by defeating all the enemies within it. However, each monster can only be defeated by a certain color of blast, assigned by reflecting blasts off of various surfaces. These include mirrors upon which you can change the reflecting color by crouching down next to them with [S]. [Spacebar] is used to redirect the blast towards your mouse crosshairs for more precise aiming. Later levels will require you to bounce your blasts off of multiple mirrors to get the proper color, and the RGB formulas required will be displayed when one pauses the game with [P]. Watch out for transparent surfaces, spikes, bouncing skulls, and the entire cast of Universal Horror!

Drawing inspiration from all manner of genres, Photon Baby is a unique little creation. The pixelated graphics and comically ghoulish atmosphere is reminds one of the 16-Bit classic Zombies Ate My Neighbors. However, Photon Baby's gameplay owes just as much to laser and gravity-based physics games, though with a decidedly more actiony slant. Truth be told, sometimes the different play-styles compete rather than cooperate, making for a few especially busy levels later on. That said, there's nothing quite as exhilarating as when a developer has genuinely thought through their game's premise, and are willing to explore it from every angle. That individual levels might have come from entirely different games, but still feel a natural progression, is to Photon Baby's credit.

With its climatic boss battles and entertaining ending sequence, Photon Baby is a very satisfying game from start to finish. It's a work that attempts a lot, and generally succeeds, especially in capturing the particular challenge and charm of a mid-nineties arcade hit that never was. If you're the kind of gamer who wished Halloween lasted all year, Photon Baby is sure to bring a little color to your day.

I think I've found a glitch. If you die right after killing the last enemy, you don't pass the level. Inversely, I dealt the final blow to the last boss by pure luck right after dying to it (again), and ended up winning right after the reset.

Can't seem to pass level 29 due to the glitch mentioned above.

The game is quite slick otherwise.

Same glitch on level 29 as stated above, oddly it didn't happen in any other levels. Walking away from game at this point, what a nuisance.

New version now online! Fixes the bugs mentioned in the comments above.

Is that the level with one Vampy and a whole gauntlet of auto-closing gates? If so, I had that problem too... until I realized it would be less risky to fire my photons from my starting point instead of in the middle of the gauntlet.