One of the lesser known members of the Jones family (who also must have some relation to the Spelunky explorer) is Phobi Jones. Phobi has scaring things out of his way down to a science in this clever puzzle platformer game from FlashRush Games. See, you're trying to collect parts of an artifact to open the door in each stage, but in your way are a host of critters who would love nothing more than to chow down on you. Phobi Jones, however, can find a way to turn each beastie to his advantage. All he needs is what every every adventurer's arsenal contains: torches, pick axes, and mice... and of course, a dashing hat. 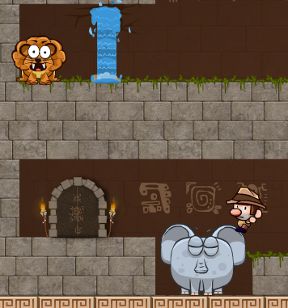 Your goal is to make it through the level while also collecting three pieces of an artifact. Direct Phobi around the caves by using the [arrow] or [WASD] keys to move and jump, and hit [R] to reset if you find yourself stuck. Click and place the pick to scare lions, torches to scare bats, and mice to scare elephants. When a creature gets scared, it runs in the opposite direction as far as it can. You can be killed by animals and hazards, but can also stand on the backs of elephants, as well as use them to break down weak walls. The movement, particularly the jumping, is a little floaty, but that generally doesn't get in the way of the gameplay. The levels are cleverly designed with puzzles that make you think, but never get so hard as to be frustrating. The art is fun, and with 24 levels, Phobi Jones makes a perfect afternoon break game.

Controls seemed fine to me, using my left hand on WASD and my right hand on the mouse.

Asmora might have meant the physics of the control. For instance I felt there was too much "momentum" and you slide too far when you stop running. Also when you change direction in the air you just go from full speed one direction to instantaneously full speed in the other direction, you don't slow down and change direction gradually. So you can't stop in mid air and fall straight downward.

The floaty controls are a bit annoying. Also annoying is having to replace everything every time you restart. It would be nice if it left torches, at least, in place after restarting a level.

@leopardmask - Given how often I clicked restart upon realising my awesome bat-proof shield of light had a massive hole in it, I personally would not have been happy if they'd stayed in place...

No way can I get level 24 to work. I jump on top of the elephant, scare the living daylights out of it with the mouse and I fall off and get killed. Controls are too slow to jump up and right and land on the elephant again.
I read in the review that there are only 24 levels, so this is the last one and I leave it for what it is.
I enjoyed the rest.