It shouldn't be much of a surprise that different developers, each creating a game called "Perspective", would approach the concept from their own unique... viewpoint, let's say. First there was a depiction of life from the experience of a pet in NFyre's 2D Perspective. Then there was the 3D platformer where the world around you changed depending on your point-of-view in DigiPen's Perspective. But now, Steve Warman and his team of students has given the world of casual gaming a whole new Perspective, and this time it's a puzzle platformer that straddles the second and third dimension like no other!... Okay, Super Paper Mario and Sky Island may take issue with that "like no other" part. But since those were fun games, it's no spoiler to say that this one is too! 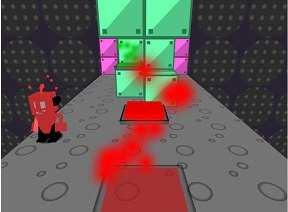 Move with the [WASD] or [arrow] keys, and jump with the [spacebar]. However, moving left and right will only get you so far, and soon you'll need to [shift] yourself into the third dimension and back again, making progress in one perspective when you cannot in the other. Note that your antenna turns black when you cannot shift, and red when you can. There'll be pushable blocks and slippery ice cubes to move around, bounce pads to fling you into the air, and teleporters to instantly shoot you through space. The game is made up of 4 worlds of four levels apiece, the fourth in each designed for maximum challenge. It may just be that "visual-spatial" is not one of the high-points on my Gardner's Multiple Intelligence personal checklist, but Perspective! was a mindtwister from start to finish. Some of it, admittedly, was structural: the unmoving camera perspective in 3D mode does mean that you'll have to commit a lot of the lay of the land to memory once things start getting complicated. This makes for very little room for error. Plus, when it comes to graphics and sound, Warman's team shows that, uh, they're very good programmers. However, this in no way cancels out challenge evident in the game, and the skill it took to construct it. Perspective! takes what could have been merely a showy gimmick, and uses the shifting its full potential, making for a game that'll feel fresh, no matter how you look at it.

So, allthough already familiar, it sure is nicely done. Simple graphics, puzzles which require persistency and better thinking.

"those were a fun game" You might want to check your grammar there, Tricky.

Shame the view isn't 1st person so you can see where the hell you're going.

Go away kid, ya bother me.

I think you forgot one game in your list of similar games.

Have you tried Fez?

Not quite the same premise (you are always in 2D, but shift the direction of view) but very satisfying.

I feel like a dope: stuck on the very first Ice puzzle. Any hints? Or power-of-posting, either way ....

Very good level design and awful music except the sand one, quite the opposite of nowadays game.

Who is "Steven Warman" ? Since I liked the game I wanted more and in credits I just see those 7 people http://vgdev.org/games/index.php?directGameLink=56

I am stuck on first level of grass on a red block with nowhere to go any hints?

So there's no way to leave a level if you can't complete it.
That's stupid.

You HAVE to play the tutorial EVERY time you load the game.
That's REALLY stupid. And annoying.

I did the 1st 3 grass levels. Level 4 appears impossible.
If you are going to make a game where view is important, make the secondary view straight from your characters eyes?

I also did level 1 of ice. Level 2 seems to be impossible because you can't get where you need to be to push the ice block.

Completed level 1 of sand after MUCH headscratching.
Level 2? Forget it! Those forward jumps over the cacti whilst riding a magic carpet?

Wall you can reload the page to leave a level at least. I completed the game, so no levels are impossible. You don't have to replay the tutorial each time, just press escape, it sure isn't well made but maybe the game was quickly made for a "jam", in which case the level design is even more astonishing.

So Tricky, can you tell me where you saw "Steve warman" ?

steve warman is also on newgrounds. can you give me hint for level 1 grass? there is a jump towards the end that i cant figure out. red block facing two green blocks and when i shift the jump is too far.

never mind found a walk through on you tube