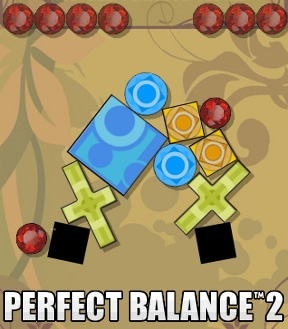 You've come a long way, baby. I could get technical and talk about how Ttursas' Perfect Balance has been played over 7 million times and that it has expanded into an iPhone game. But the real hallmark of success: the title of the sequel Perfect Balance 2 is now followed by a TM. Trademark! Now that's legit, baby! This tale of you versus Newton's pesky little laws must have something to it.

The Perfect Balance games are all about balance in its simplest form. It's down to the basics of physics here, where your goal is to stack a bunch of weird pieces on top of a bunch of other weird pieces and get them all to stay. No ninja highjinks or "Man On Wire" bravado, just careful maneuvering with a touch of [A] and [D] key-enabled rotation. Given that you are never handed a flat surface, this can become tricky. Drop something on a slant and it will slide away along with your peace of mind. What you need is a piece suited to latching around a corner, with another part of it conveniently protruding on the other end acting as a little barrier. Now we can drop that block and it won't go anywhere.

It might have been tempting to simply hand you a lot of Pythagorean shapes at the start and up the ante with a few circles later on, but Perfect Balance doesn't pull punches. The first level presents blocks that seem straight from a surrealist's Tetris set. It's surprisingly intuitive to get them all to fit, though, allowing the game to become a brilliant exercise in lateral thinking. The fun kind, like sitting with a beer and pondering how far a dog can run into the woods (halfway, btw, because then he's running out, you see..).

Analysis: Perfect Balance 2 is not really that different from the original, but it's full of small touches that raises the bar on the series. It is a lot more zen, even though it ironically never imitates its predecessor's encouragements that you "take a deep breath" while testing your final construct. Where Perfect Balance felt like a game, its sequel is an experience. First, gone are the 80 levels you have to hammer through sequentially. Now there are 100 levels, but they are split into five parts each, accessible from the start. The first part features brand new challenges while the following four are all presumably taken from the iPhone version. To remove even more frustration, you can now skip levels (up to five times, then you have to reset your progress). There is no real penalty for this, other than you don't score on that level, but you can always go back and try it again.

Unlike the first game, the sections are not individually themed and the soundtrack does not change either. This could have been annoying, but you hardly notice the ambient electronic muzak as you frown with rotating pieces. Each section does have a vaguely different background, but these ideas were implemented to make them less distracting and keep your mind on the challenge. It's like being in a doctor's waiting room: you never notice the decor if there are good magazines.

Challenge is certainly here in spades. Apart from manipulating strange shapes into Newton-approved positions, the ante is upped with the appearance of heavier blocks adept at keeping pieces more secure and see-sawing bases that tilt under a piece's weight. The latter are used quite cleverly, because sometimes you need to jam a piece between them and a solid base to keep them stable (or in at least one case jam a piece between two such flip-flopping bits of terrafirma).

But I left out Perfect Balance 2's biggest addition. As with the first game, scoring is dictated by a subtracting counter, so the faster you do the puzzle, the more points you hold on to. Now there is a bonus element: once all the pieces are balanced, the game hands you nine diamonds to add to your structure. For each diamond you get to sit still, you receive a score bonus and there is an extra hand-out if you use all nine. This mechanism confirmed my suspicion: many of these challenges can be done in more than one way. Often you can get all the pieces to balance, but can you get all nine diamonds on there as well? To be fair, not even the walkthrough manages that, but you can submit both your score and how many diamonds you have used, so the gauntlet on diamond-mastery has clearly been thrown.

Perfect Balance 2 shows the character of a veteran developer comfortable enough with its game not to throw out the baby or the bathwater, but instead change the soap and light a few scented candles. It takes a good game and makes it great. Even a grouchy snob like Newton would love it.

I just love games where you play with and balance balls and other shapes as the next guy, but this game I didn't crave for that much.

I have played a number of these balance games, and this is easily one of the worst. Which is sad, because I really like the diamond idea. But in this game, the countdown takes ridiculously long to start. If you have a diamond on a relatively flat surface(but somehow uneven on a level undiscernable to the naked eye), it will creep... and creep... for minutes of real time, and finally fall off the screen. Save yourself the frustration on this one.

I feel obligated to chime in, since my walkthrough was specifically mentioned: Every solution in the vids (save 1 or 2?) was my 1st time beating that level. The walkthrough is not meant to be optimal or fully optimized... just what I was able to work out from visualizing it ahead of time and messing with failed previous attempts. However, it is enough to get all in-game achievements and an S-Rank on all packs... anything beyond that, I leave to your imagination. :)

I really enjoyed the first PB, and enjoyed this version as well. (Well, part A of it ;-)

I only had trouble with the timer once (meaning: I had a piece that just wouldn't stop wobbling). But this game, more so than others like it, isn't about building teetering structures that survive a time limit. All of the levels I played had clear solutions that were extremely stable.

Usually you have to have very clever "locking" structures built out of the shapes. You know you are doing it right when you get middle balance bonuses for every piece you place (or nearly so - at least once I had to place two pieces that slid down ramps into each other to lock in).

I love the diamond challenge, although more than a few times I was quickly clicking next as everything came crashing down (you lose the diamond bonus, but you don't need to replay the level). I would recommend a button on the "diamond crashed" text that lets you take the base score, without any diamond placements. (Of course, that's the risk!)

I should have mentioned the sliding element, but ultimately I found that if the objects were sliding, the structure was usually unstable and warranted a reset to try again. What surprised me is how specific that is: in one puzzle a very slight incline on a bar means my circles always eventually rolled away. But on the other hand dropping a straight-edged piece at just the right angle and height can make it stay still on a slope.

This kind of fine balancing between success and error suggest a game that is easy to play/hard to master. That is probably thanks to its iPhone pedigree, where gamers would expect to replay the game more than once, and marks a move away from many Flash games' "consume and move on" philosophy.

Can you please explain what merited the :o rating for what seems to be an innocuous puzzle game?

what bothers me most is the level design... most of the time you'll get through just by some random piece stacking. there's hardly any levels that require a specific clever solution.
also the difficulty curve goes up and down very randomly throughout the level packs.

so where's the walkthrough?

Where is the walkthough for this? I can't find it. I'm not sure if anyone else can find it.

I agree that random stacking can get you through this - that was the flaw in the first game and why the diamond system is actually a nice work-around. You can essentially stack your way through a level, but the challenge is to stack it in such a manner that you balance all the diamonds as well for extra points. This encourages lateral thinking without pinning a player to a very specific solution.

As for a walkthrough - if you click on the walkthrough button in the game, it opens a site with a video showing basic solutions, courtesy of Tasselfoot (http://www.youtube.com/watch?v=Bl7yc_PmypA)

I can't seem to beat level 9 in pack E with Tasselfoot's solution. I wonder if an update just made that solution impossible.