Games are a good way to draw traffic to your site and get them involved when they arrive, and Pepsi recognizes this. Pepsi Co. UK commissioned the development of these games to promote their products and give visitors to their site something to have fun with. 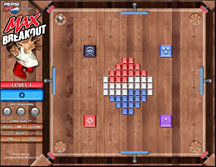 Breakout is a twist on one of the oldest gameplay formulas in videogames, and it is surprisingly difficult. Instead of controlling just one paddle, you control four, and all of them with the mouse. Moving the mouse to the left and right move the top and bottom paddles, while moving the mouse up and down move the right and left paddles. Not only does the control scheme seem a bit odd to describe, playing it is a similar experience that challenges your hand-eye coordination skills. The object, of course, is to keep the ball on the play field, which is in a top down perspective. To add some variety, four power-ups exist to change up the play, such as: multi-ball, laser paddle, and big paddles. Click. 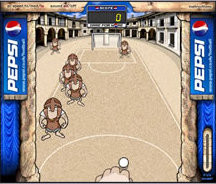 Finger Footy is a fun and humorous game that pits you against a whole football team—that's soccer to us Americans. The object is to try to score goals by getting the ball past the oncoming players, all the while preventing the players from getting too close by bowling them over with the ball. Control is with the mouse, click and hold the button down to power up your finger to flick the ball down the play field. Scoring a goal nets 15 points, and 1 point each for every player you knock over. It's a cute game that gets more difficult as the big guns come out later in play. Click.

Update: Unfortunately, Pepsi UK has taken these games offline to make room for another promotion.

Why where these games erased?

4,730 Views
23 Comments
chrpa— Hello! It's Weekday Escape! Amajeto decided to remake some of their older games apparently - from well known reasons probably - and this week it's one of their hotel rooms. Very talented newbie kitposition wants you to escape luxury...  ...

4,339 Views
9 Comments
chrpa— Hi and welcome, the new Weekday Escape is here! This week Amajeto wants you to break free from their colorful kid's room. After you do that, you find yourself in Tokoyo's place with many colorful codes to be broken, and...  ...

5,306 Views
4 Comments
chrpa— Hi, we are going retro this week! Vitamin Hana locks you in a gym and wants you to use it. After you escape from here (several kilograms lighter) you find yourself in Yona Yona's cute room with strong retro vibe,...  ...