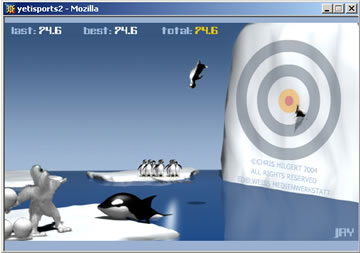 In January, 2004, Chris Hilgert created a Flash game called Pingu Throw, which spread across the Internet like wildfire and spawned an entire new genre of Flash game. The gameplay mechanics were simple and surprisingly fun: Bat a penguin with a Yeti to see how far you could throw him. Since then, Chris has created a trio of games featuring penguins, a yeti and other arctic mammals, and a fourth one is on the way.

Be sure to check out all the variations it spawned.

Lovely, the last thing I need is to get addicted to ANOTHER yeti game :sigh: