Pedro and the Pearls of Peril 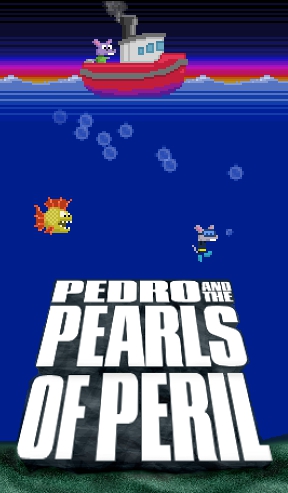 Pedro and the Pearls of Peril is the kind of game that's likely to appeal to multiple demographics. First of all, there will be those in the mood for a good action-shooter, with some shades of Metroidvania and a masochistic edge of difficulty. Then there will be those who'll be convinced once they see the name of Robot Wants retro-maven Hamumu on the title screen. There will be those Cub Scouts who just happened to stumble over the game on the Boys Life website, and are intrigued by what wacky new adventures Pedro the Mail Burro has gotten himself into this time. And last, but not least, there is the not insignificant group of gamers who have a thing for alliteration. Never count them out.

See, your friendly neighborhood postal-donkey has flown out to the Bermuda Triangle in order to recover the mail recently lost in a barge capsizing. Use the [arrow] keys to swim around and collect envelopes scattered about the landscape. There are also enemies to deal with, and the more envelopes you recover, the more aggressive they get. Aim and shoot your weapons with the mouse. The more you use a weapon, the more XP it gains with upgrades to choose at every level. Floating near clams gives you a chance of discovering a pearl. These pearls can be traded to your friend Ordep in exchange for new weapons (switched between with the [1-5] keys), power-ups and upgrades. Specifically, you'll be required to get some rock-destroying mines or lasers to reach the lower parts of the ocean. There are 49 envelopes to find... and one more that won't be gotten without a fight.

Analysis: Hamumu's other work for Boy's Life, including the previously reviewed Mad Planet, has had that maddening combination of quality presentation and nerve-shattering twitiness. While Pedro and the Pearls of Peril continues that general trend, the difficulty is better integrated into the proceedings giving it a much greater sense of fairness. It does still has the oddity of tacked-on sponsorship: as far as can be told, Hamumu originated the premise in a Ludum Dare entry, with the scuba-diving envelope-collecting donkey a late and not-entirely sensical addition to the premise. That said, one should never look a gift-burro in the mouth, especially when the burro is delivering quality retro action. 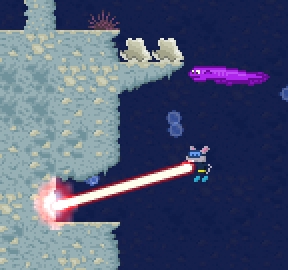 The difficulty of Pedro and the Pearls of Peril is indeed relentless, but that itself distinguishes it from other Metroidvania analogues. While buying power-ups makes the central goal of finding envelopes easier, the "more envelopes = more enemy aggression" is a touch of gameplay-mechanical genius that prevents things from ever getting tedious. Even when nearing the end, players will still get that jolt of "Oh crap!" when a pack of piranhas, electric eels, and chompy angler fish descend on the hapless mail-donkey.

The trade-off for this consistency is a steep initial learning curve. When one is told that collecting envelopes will lead to victory, it is only natural that it will become your primary objective. By the time it is realized that the game is practically impossible without certain upgrades, the aggression of the enemies may be too high. With their their random locations and diminution of supply upon death, it can be keyboard-poundingly difficult to initially amass the number of pearls needed to even reach the lower levels of the ocean. Perhaps this is the peril the title alludes to? Combined with how weak the rock-blasting weapons start off as, any first attempts into tunneling will be met by more deadly nautical ambushes than the average film from The Asylum.

While this difficulty spike at the start may be too much for the local Bobcat or WEBLOS, it shouldn't prove too much for the seasoned online gamer, especially one who knows in advance that they'll have to play smart to survive. The combination of gorgeous pixel art, frenetic gameplay, and octopi in pirate hats is just too hard to resist. It just goes to show that Hamumu is the kind of developer who'll never just mail something in.

Play Pedro and the Pearls of Peril

I'll play to see if you got the metrovania part right, just kidding, you guys are cool, i'll play it anyway.

Well that was a heck of a lot of fun. I died two or three times right in the beginning while learning the mechanics of the game but after that I found it to not really be a "high difficulty" game at all.

My first purchase was the mining laser and then I only upgraded that and the harpoon gun. No point in buying the other weapons at all. The "healing once every 20 seconds" was a great second purchase, and then the mail radar basically won me the game. After that I just picked up armor and other powerups whenever I visited back to the boat.

Wow, brilliant game - before I knew it, an hour had come and gone and it just had me stuck to the screen all the way through to the end.

I was just a minute short of LuckyDee's time. Strangely addictive. And where the freak did

come from? It wasn't that challenging to beat, but it looked like some kinda boss, but I'd only got 40-something letters when it attacked.

Just a trick for if you want to get more pearls.

Oysters spawn on any horizontal surface, so you can use the mining laser to blast long paths, which will fill up gradually with oysters. After I got about three paths, I would always have a line of oysters to harvest just going back and forth on the screen.

The mail whale spawns regardless of your letter amount as long as you are at a certain depth.

[Please use spoiler tags, not square brackets. Thanks! and fixed. -Mod]

68 minutes to destroy the marine environment to smithereens.

* Get the heart auto-restore gadget

* Max power up the first weapon

* Get the diving manual

* Get the mining laser

* Get the armor gadgets

* Use the mining laser for everything and basically destroy the world

The only gripe is the lack of a suitably happy music and the fact that the final boss actually appeared before the endgame... so I had to destroy it twice.

I found this to be an incredibly easy game. Here's why:

The harpoon gun at the maximum upgrade level makes you essentially invincible, at least if you get the health restoration item. After that, the only other weapon worth was the mining laser, for use as what it says it is. I spent most of the midgame collecting pearls too, so that helped.

I didn't use the Laser much in my first run, so I went back and did an all-Laser run.

It was pretty easy.

If you think this game is too easy, I recommend you try a no-Laser run. If that's still too easy, try it with only Mines.

Nice game, strange concept "Mouse under the water". I wish to have more devices, enemies and deep levels.

Heh, so I kind of missed the fact that you can upgrade your weapons through experience for maybe the first 20 minutes of the game, and I was wondering how the HECK anyone could beat this game or get enough pearls without dying to get any of the other powerups. Then I happened upon the upgrades and since it had been so long I was nearly able to completely upgrade my lazer gun all at once and suddenly the game got a LOT easier. Still fun though! I'm a completionist nut so I upgraded all the weapons even though I ended up really only using the harpoon and lazer. Fun game though! Really pretty easy once you upgrade your weapons to a certain point and get the envelope gps thing.

Yeah, too easy of a game. :/
50:36, and I had time to buy all the shop goods while upgrading every weapon to the max.
But, that was quite fun to play. Even though the first weapon was really like überkill !

Only 33:44 because one weapon everybody overlooked is sooo powerful :)

The mine gun maxed out is the best spam that can hold off the whale + mob. Plus it's the best digger.

So just get first 10 pearls for the laser. Then create horizontal farms for more pears. The the mine gun, book and radar (maybe some protection and healing to).

AFTER that start gathering mail and trying to use the mine gun all the time. The start is hard but it quickly goes to a coral reef and sea life destroyer.

I'm a completionist, so I just HAD to buy/max everything before I beat the boss, netting me a time of 75 minutes or so.
If you max the bolt gun (but not its spread upgrade), it completely obliterates, destroying everything in no time. Mine spam actually works very well too, but only at max upgrades. For the majority of the game, I used the laser. Sooo good at digging after you hit digging level 5, I'm tellin ya. Don't bother with the missiles unless you're a perfectionist, they're absolutely horrible, even at max upgrade. Harpoons aren't actually that good either, stick to the bolt gun and mines (the laser is wonderful early on but strangely becomes more of a drilling tool by the end than a primary weapon).

Doubt I can top this one.
I glitch turned up where the edge of the site had a hole in the wall and when I tried to go through it, it loaded up my pearls super fast.

I then filled it twice, got everything and went super fast and killed everything quickly.

13'30" Had not played in awhile. Got lucky in every possible way.