Considering Askiisoft also masterminded the brutally hard Tower of Heaven, the fact that their latest puzzle platformer Pause Ahead is also hard as nails should come as no surprise. The game gets teeth early on, after only a few training wheels stages, and it doesn't ease you into the difficulty so much as it does rip off your swim floaties and toss you into the deep end while laughing. Using [WASD] or the [arrow] keys, you have to run and jump to make it to the exit before the time runs out in each stage, thinking and moving fast to avoid the unrelenting hazards that can take you out with a single hit. 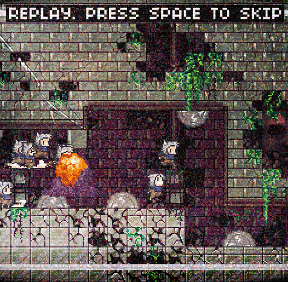 The twist? When you pause the game with [C], though time won't pass, your character's momentum is preserved, and even while paused he'll keep moving in the direction you were running or jumping until you unpause the game again. It might sound like an inconvenience, but this nifty trick is on your side, since it renders him invulnerable to damage and can even let him soar across great distances he wouldn't ordinarily be able to jump. He can't go through obstacles like scenery, though, so you'll need to learn to master using the pause ability in tandem with rapid-fire reflexes and platforming if you want to survive.

Pause Ahead is definitely not for everyone. When you combine timed stages with hardcore difficulty, the end result is typically a whole bunch of flipped tables, though I personally found the timer was rarely an issue. If you're up for a challenge, however, and you're looking for some slick beats (that soundtrack is sweeeet), this is something you should check out. While the extremely tight level design does tax your reflexes, most of the challenge comes from figuring out precisely when to hit pause, and at what angle, and when to drop out. It's a game where milliseconds and millimeters make equal difference between success and failure, between soaring across a spike-laden pit like some majestic... kitty ear... eagle thing, and accidentally hitting pause too soon so you soar straight up into the thwomp blocks at the top with nowhere to go but kablooey. The tone gets decidedly odd around level ten when the game really takes the gloves off, and the level design quickly gets downright malicious. Pause Ahead is a beautiful looking, beautiful sounding game that will pound the snot out of you at any given opportunity, and for some people, that's exactly what they're looking for.

Interesting game, but I rage-quit at 13. Couldn't get the angle right after the jump at the top.

I loved Tower of Heaven, and this one is just as awesome. I wonder if it has a hidden ending too?

May heaven grant you fortune.

Wow, that was really hard/fun! I really liked the pausing as a mechanism of the game! I bet that idea came from an accidental glitch before!

I didn't get that much meaning out of it, other than there was an evil boss that you had to get pass, and I didn't collect any of the 3 secrets, but I'd LOVE to know what they were! ...I just don't have the patience to play that game again. X.x

One of the three secrets:

On level 6, go up and left from the starting point.

Another of the three secrets:

In the level in which the door is 5 steps to the left of the start point, continue all the way to the left and go down through the floor; the treasure is at the bottom of the shaft.

So, the boss. After the first two stages, what do you do? I keep on being terrible at platformer and killing myself.

the difficulty is too much there. But it's a 5 stars little game, definitely! original and very well executed.

I got too frustrated at level 18, too hard for me lol but nice idea.

The final boss is really just terrible. Why is behind the spoiler...

First of all, the echo that follows you around and kills you if you touch it. BAD IDEA. That worked in One Step Back because (1) it is the ONLY thing trying to kill you, (2) it only moves when you move, rather than also moving when you stand still and (3) it makes sense in the context of the game. Here it just seems like something that was thrown in for no reason at the last second because somehow the final boss was perceived to be "too easy" or something dumb like that.

Secondly, the second phase of the boss makes no intuitive sense. The fireballs should be aimed when they're being fired, rather then as they're falling. In other words, if I stand in one place as the 3 fireballs are shot, they should all fall in that one place. It makes absolutely no sense for the boss to be able to know where the player will be in the FUTURE like that. I mean this in the sense that it won't be immediately obvious to the player, and for an experienced platformer player it goes completely against one's instincts for it to behave that way.

Finally, the third (maybe final) phase has no clear way of winning. No way of "damaging" the boss a 3rd time is at all evident or even the least bit hinted at. Everything else would probably be okay, I mean, I can adjust for all of the other stuff if not for this horrendous flaw. And if the player is expected to just survive the attack for a long period of time without actually doing anything to directly harm the boss, that's a pretty unrealistic expectation.

It's a real shame, too, because the rest of the game was amazing.

yes it is a survival part.

kgy121, just where's that other secret you mentioned? I think I have the room, but there's no sign of a route leading to it.

On level 6, head up and wiggle yourself into the top left corner of the screen.

On level 13, make the Thwomp crush the floor twice. A door will appear where the face was.

On level 19, head all the way to the left and float below the bottom left spike.

In the room before you face the architect, there should be an open passage on the left of the bottom floor.

Rather than have the thwomp hit the floor twice, just wait until there are 10 seconds or less left on the clock before going back down to the bottom.

Huh, I thought you had to break the thing open. Interesting to know it's time based.

The last part battle puzzles me. When I die, I'm sometimes spawned into the second phase, while other times, I'm back at the beginning when I die. To top it off, I have no idea what I'm supposed to be doing in that stage. (hehe) It's a pretty freaky design in the background for a game with such cute graphics.

Important: Your clone will follow any moves you make, and if you pause and move to a new position, it will teleport there after your move has ended, so don't stay in the same spot once you unpause unless you want to get tele-fragged.

Phase 1: The Architect will on occasion, try to summon huge spikes to pierce you from underground. Easily beaten if you take advantage during the beginning, by standing briefly on the first button you land on, then pause-moving to the opposite button so that your clone triggers it. BOTH must be triggered for Phase 2 to happen.

They will track the last place you stepped on, so time those hits carefully.

Phase 3: The Architect turns invisible, except for its heart, and four beams of energy will come out of the heart. If any beam makes contact with the ground, a pillar of fire will appear, and will follow the path led by the beam.

The beams will alternate between counter-clockwise and clock-wise movement for approximately 2 turns.

Survive all that, and the good ending is yours. Of course, though, if you want a greater challenge:

Has anyone beaten that area under 3:33? I just have, today, after struggling to figure out the most effective route through it.

saviourv, Ive done 3:28. You just need to pause in some "not really necessary" spots.

Trying to go ahead on the crushing faces(the little and the bigger one) while the biger one is still falling and the little one is still in front of you(at the rigth way)is kinga hard, but saved me some like, 3 seconds or so