Don't you just hate it when a bunch of brutes, nerds, bullies, and ten feet tall Greeks show up at your party unannounced? Party Crashers Tower Defense plays on that most basic fear humans have shared since the invention of chips and dip. You've only got so much food, so it's your job to defend the party from invading party crashers! 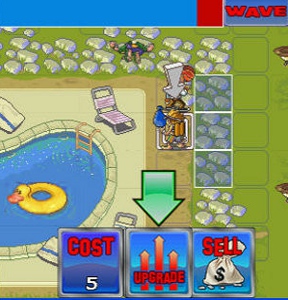 Party Crashers TD plays out like most tower defense games, providing you with a small stipend you can use to purchase units to place on the battlefield alongside the path waves of enemies will follow. In this case, you have ball players, cheerleaders, muscle men, guitar players, and more on your side, each regularly attacking enemies as they walk by. You can upgrade and sell units with a few taps on the screen, and placing more is just as simple. Occupy choke points on the map with powerful units so you can deal the most damage to the increasingly tough waves of enemy party crashers as they march by. Protect your tables of food, dude!

Party Crashers is the sort of game that grows on you. It seems rather awkward at first attempt, as the control scheme doesn't seem optimized for quick touch screen use. You'll adapt to that easily enough, though, and when you do, this quick-play casual strategy game will be much easier to enjoy. Despite its lack of flair or innovation, you'll find it's got all the right elements for a fun, light-hearted, tower defense experience that's especially suited to anyone new to the genre!

NOTE: This game was played and reviewed on a first generation iPad. Game was available in the North American market at the time of publication, but may not be available in other territories. Please see individual app market pages for purchasing info.