It's Mardi Gras, home of costumed pedestrians, masked partiers, parades, dancing, food, and more crazy things than you can imagine. What could possibly go wrong with everyone in the throes of celebration? Try murder. Murder, and a number of occult happenings shortly thereafter. As you arrive on the scene of the crime, you learn something very strange has been going on in Louisiana, and judging by the glowing tattoo on the dead body, you know it's not going to be an ordinary case. Pick up your fingerprint kit and brush up on your voodoo knowledge, as in the new adventure/hidden object game Paranormal Crime Investigations: Brotherhood of the Crescent Snake, you're going to do some investigating of the supernatural kind! 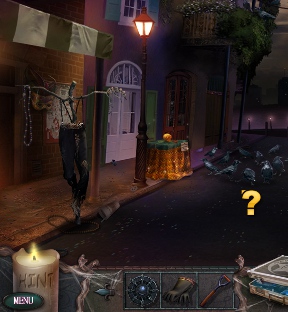 Paranormal Crime Investigations: Brotherhood of the Crescent Snake combines crime scene clues, mini-games, and plentiful hidden object scenes and attaches it all to a sturdy casual adventure backbone. As you investigate crimes, you'll need to explore the area a bit in order to gather more evidence. Your path isn't always a clear one, however, and you must do some puzzle solving in order to continue. The cursor serves as a handy guide, alerting you when there's more information about an object, telling you when you can speak to characters, and allowing you to move from scene to scene.

The Paranormal Crime Investigation kit (PCI) plays a major role in this game, allowing you to extract loads of information from the most unusual pieces of evidence. To use it, simply find an item that glows in your inventory, then move it to the kit on the right side of the screen. A mini-game will appear, usually something very short and not too challenging, and once it's complete, you'll be presented with a bit of evidence. Not too shabby for a magical glowing box of science! 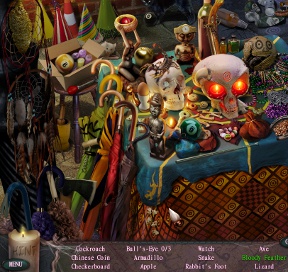 Analysis: Story is massively important in Paranormal Crime Investigations: Brotherhood of the Crescent Snake, and the tone set by the first scene is carried on throughout the game. You quickly learn an ancient cult is trying to summon an ancient snake god, and by investigating the murders carried out using dark magic, you begin to learn more and more about the Brotherhood of the Crescent Snake. It makes for a painfully long title, that's for sure, but the plot is definitely one of the game's strongest areas.

The mix of hidden object scenes, puzzles, and crime scene investigations is good, if a little heavy on the hidden object areas. Although you won't get stuck very often, the hint system recharges very quickly and can help you in a pinch. Some of the item descriptions can be a bit misleading, though that shouldn't be new to anyone who has played a casual hidden object game before.

On the down side, Paranormal Crime Investigations tends to repeat itself, using backtracking to flesh out the experience and reusing the same few mini-games over and over again. Expect just over three hours of gameplay from this title, nearly an hour more if you factor in the healthy bonus chapter included with the collector's edition. Also, the bonus content extends the ending somewhat, making a must-play if you really get hooked by the game.

Paranormal Crime Investigations: Brotherhood of the Crescent Snake hops right in to the crowded horror/hidden object genre and isn't afraid to start swinging. It's a well-made game from beginning to end, with good visuals, fitting music, and a story that's bound to capture your interest!

Go through the open door to the back lot of the Dark Arts Museum.

Does anyone else find the amount of collector's editions in the HOG genre amusing? Silly?

I always get this little chuckle escape when I see it.

Go through the open door to the back lot of the Dark Arts Museum.