Papa Pear Saga is a dangerously addictive combination of Peggle and Candy Crush Saga. Created by King, Papa Pear Saga was previously a Facebook game but has made the leap to mobile devices. The iOS/Android release will absolutely ruin your productivity, as all you'll want to do is play level after level of this pachinko-style arcade game. 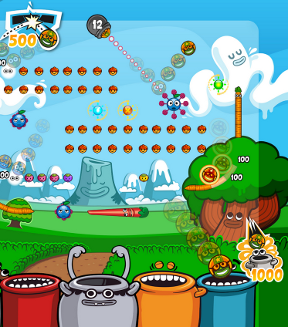 Just like Peggle, you're given a cannon at the top of the screen with the simple goal of eliminating pegs by firing balls at them. In this case, you're shooting papa pears as bits of fruit, chaining hits together to earn score multipliers. To beat a level you have to meet certain goals, the most common of which are "clear so many bits from the screen" or "knock out the acorns". Later you'll have to pull off more complicated tricks, which is when the game really gets its hooks in you.

Papa Pear Saga's set-up is very straightforward, but it's all the extras that make the game really shine. Power-ups and boosters can be used to do things as innocuous as multiply your score or as dramatic as explode pieces of the screen. Always handy for getting you out of a tight spot! The freemium aspects of Papa Pear Saga are very nicely done. There's no pressure to spend money, but you can if you just can't make it past a certain level. Part of what keeps bringing you back for more is figuring out how to push past obstacles without resorting to an IAP, turning the purchases themselves into a sort of meta game. Nicely done, King. Nicely done.

What Papa Pear Saga lacks in raw innovation it makes up for in playability and pure addictiveness. The sugary sweet visuals with smiling trees and happy pear buckets are just icing on the cake. Grab it now and let it start eating your free time away!