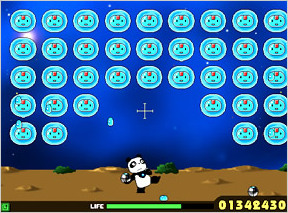 If you have been visiting JIG for some time now, you should already be familiar with our little friend, Panzo the panda bear from Japan. You may also be pleased to know there is a fresh new Panzo game to play.

About a year ago I reviewed Gel Invaders, a Shockwave arcade game with gameplay similar to a combination of Space Invaders and Breakout, starring Panzo and hosted on the Japanese website, Netkun. Now, a sequel to that game has just been released featuring even more enemies and power-ups than before.

Panzo Invaders 2 picks up the ball left by the first game and runs with it. But now there are even more balls to toss at aliens, which means there are also more aliens to fight as well. This is a good thing since the first game was rather easy to beat.

Just like before, use the mouse to make Panzo run back and forth along the ground to collect the balls, press the mouse button to toss a ball in the direction of the cross-hair cursor. Click to jump when Panzo is not carrying any balls. Jumping becomes necessary in later levels when the drops that fall from enemies sometimes turn into enemies that crawl on the ground.

Hitting an enemy with the ball will cause it to fall from the sky and release coins and power-ups. Some enemies require more than one hit to take them out. Hit more than one enemy in a single throw, bounces included, to release even more coins. Collect coins for points and collect power-ups for shields, health, and a little umbrella that helps protect from the enemies' elements.

Avoid falling enemies and the stuff they drop. Each time you get hit, a portion of your life energy bar will be taken away. If you lose all your life energy, the game is over. Please help Panzo knock those alien buttheads out of the sky.

Hooray for a new Panzo game! And cheers to Jack for making us aware of it. =)

Hi Jay! Thanks as usual for all the great links and reviews. I feel it is my duty though, to let you know that pandas aren't bears, as you refer to them in your review of this game. They are marsupials. :D

nice little distraction, I love the difficulty of having to worry about your enemys falling.

Oh my. And all this time I thought...

(Nevermind what I thought.) Thanks for setting me straight on that. ;)

Hmm. Panzo the panda marsupial... just doesn't have the same ring to it...

The giant panda (Ailuropoda melanoleuca "black-and-white cat-foot") is a mammal classified in the bear family, [1] There is on-going debate as to whether this creature is truly a bear or more related to the raccoon rather than the bear, or perhaps in a family of its own. Recent genetic research has tended to support the conclusion that the giant panda is in fact a bear, but one that diverged relatively early from the rest of the family Ursidae.

I love Gel Invaders!!!! Many hours spent here in Buffalo during the winter playing it!

I think I'll just go play another round of Panda Invaders and forget the whole thing. ;)

I love this game! Its so simple yet addictive!

This was OK, but not great. I would have liked to see the screen expanded to fit more enemies, and the pace is a little too frenetic for my tastes (too much relies on luck, it seems).

What I really want is a sequel to Geru Geru Panic.

A sequel to Geru Geru Panic? I believe that game is very close to perfect just the way it is.

What would you change, js, in a sequel to make it better?

Well, I certainly don't want to detract from the enjoyment of the game with a Panda-zoology debate! I guess you'll all have to make up your own minds on the bear/marsupial debate. ;) Thanks again for the great game postings, Jay.

You're thinking of koala "bears." *THOSE* are really marsupials. Pandas are a different matter altogether.

Hey, anyone found a way to avoid the blobs that form on the floor? Sometimes if I throw a ball precicely when it's underneath me, it doesn't stun me, but I'm not sure whether or not it still does damage. Any suggestions?

You can jump, fishamaphone... get rid of your balls and click above you... you can also kick when in the air and punch while on the ground

Fun game, but is there supposed to be an ending? After I finished what I assume is the last stage, the little robot thing came out and the game just sat at that screen.

To avoid the gels on the ground, just jump over them. Jumping is unintuitive in the game, but that's probably by design.

Here's the winning strategy for the game:

Alien buttheads indeed... It is fun But i played it badly - As badly as another person that played it as badly as I did.

It gets so frantic on that level that it's almost impossible to play with any planning... maybe it's just me. I was just clicking away trying to kill reduce the number of things that could kill me and eventually died.

Fantastic game, though. I'd never seen the Panzo games before.

is it possible to jump when you have the balls?

yay!! i finished it not sure what my score was though...fun game...keep up the good work jay ;)

Here's a tip for dealing with those nasty floor enemies:

It seems that if your ball touches any enemy fire, it can get electrified. If it lands on the ground and you don't pick it up, it will stay that way and will kill any enemies on the ground. However, it will be quite difficult to avoid picking it up due to the panda's speed, so be careful!

One of the subtler game mechanics that struck me more as I played this game was the speed difference between this game (and it's prequel) and Yard Invaders. In Yard Invaders, the hero moves slower than the panda does here, though fast enough to get away from a missile or two overhead. This makes it both tougher to aim and tougher to navigate the barrage of shots than in Yard Invaders, which flips the problem of getting stuck too far from safety to the problem of running into the bullets.

go right over to the right hand side, and try to throw a ball above everything so that it lands on top of the middle red gel things, if you are lucky, the ball should filter down destroying everything in its path, making level 10 much much easier (should give lots of health/shields in doing so as well)
also, i may be wrong but i think you can continue on your current level if you die for any of the levels except for level 10 (so try to finish level 9 on near full health)

Very fun sequel. Hard--but fun. Is the last level the one were the sky gets dark? I ended up getting a game over on that level on my first try of the game. I managed to get 4,532,860 points total. I think that's pretty good for a first try, don't you think? :P

Jay- Yeah, a GG Panic sequel is what I want. I want that game to have more levels, maybe more powerups, and maybe one more class of enemy (who would be a different color and move at a different speed).
But a couple things that I would change about this game (some would alter basic mechanics, some wouldn't): A bigger window size (since the offscreen stuff tends to annoy me) which would allow for greater speed control on the balls and for more space between band guys, leading to better chances for combos.
Remove the extra balls, as they don't help much over two, and maybe make them available through powerups, not just there.
Get rid of the crawler things on the ground, as the control isn't fine enough (at least in my hands) to throw the ball laterally without also running into the blobs when they're close.
I do like some of the increase in speed, especially the whirling things, and I like how that finally gives you some ability to use the jumpkicks (though the jumpkicks would have been something I would have removed from the first game).
Basically, what I liked about the first game was that it could be such a great game of timing, rather than button mashing. I'd work toward that again as a gameplay ideal, while adding more variety of elements (enemies, flight patterns, items).

I'm probably a loser for being the only one playing this game so many days after it was posted, but I got 8,613,760 and finished lvl 10 with full health :)

loser??! The games we post here on JIG are generally exceptional in some way, as evidenced by the comments that keep rolling in for games long since scrolled off the main page. Most of them also deserve a replay from time to time, which is why I implemented the replay feature.

I, myself, keep coming back to the Panzo games since they have great casual gameplay.

actually, panda are bears. Check out this link:

Look in the Classification section.

"For many decades the precise taxonomic classification of the panda was under debate as both the giant panda and the distantly related red panda they share characteristics of both bears and raccoons. However, genetic testing suggests that giant pandas are true bears and part of the Ursidae family, though they differentiated early in history from the main ursine stock. The giant panda's closest bear relative is the Spectacled Bear of South America. (Disagreement remains about whether or not the red panda belongs in Ursidae; the raccoon family, Procyonidae; or in its own family, Ailuridae.)"

so there you ahve it. I seem to remember seeing a similar classification told on a nature show on the National Geographic channel some years ago. I have no clue why some people still think of it as marsupial.

They carry m,uch different traits than any panda. I hope that clears up things....

oh and I loved the game LMAO

Hey Jay - both this and Gel Invaders (https://jayisgames.com/archives/2005/06/_gel_invaders.php) no longer have functioning links.