Pandesal Boy by Khail C.S. and Josel Nicolas (and sponsored by Robin Ras) is an unexpectedly clever little puzzle platformer that starts with a very dangerous job that, naturally, winds up getting you cursed... delivering bread. Your goal is still to deliver the bread to your customer's house in each level, using [WASD] or the [arrow] keys to move, but that was a lot simpler when the world wasn't floating in a void. Luckily, you've got a few new abilities up your sleeve, and to get around, you can click certain platforms to rotate them, or hit [S] while you click to turn them counter-clockwise. While only the grass platforms are safe, as new elemental tiles come into play, you can actually use even the hazardous ones to your advantage. Lava may be deadly, for example, but it can be used to light cannons, and cooled with the touch of an ice platform to let you safely pass. But that's just the beginning. 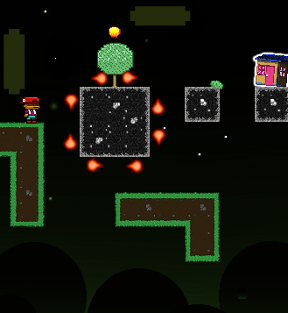 To say Pandesal Boy has a lot of ideas is a bit of an understatement, as over the course of its 28 levels (and four bonus stages) you'll do everything including launching yourself from cannons on a projectile path, find yourself split into two boys who move simultaneously, dodging angry spirits, and more. It makes for a lot to handle, but also keeps the gameplay fresh and inventive, though there is so much that not all of it gets used often enough, or even to the full extent of its potential. Since reflexes come into play as often as brains, the timed scoring feels like a bit much even though you can ignore it if you choose, and the game is honestly a better puzzler than a platformer since moving and jumping feels a little stiff. The level crafting for some of the more thinky stages can be downright sneaky, and new things are still being introduced even late in the game in, uh, unusual ways. (Who knew a cosmic fart could come in so handy?) Pandesal Boy is an unexpected delight with a ton of creativity and a goofy sense of humour,

It doesn't load. At all.

It opens a a black rectangle that then vanishes.

True. It's fixed now. Thanks for the feedback.