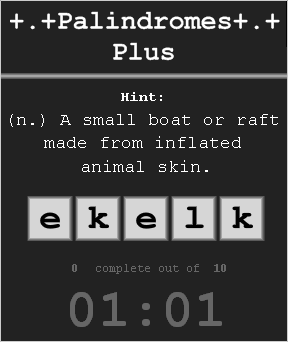 What exactly is it about palindromes that has held mankind's fascination for countless generations? Do we find something pleasing about their reversible disposition, the same way we are drawn to things of symmetry? Or is it the arrangement of the letters themselves, as though their twofold message houses a greater part of the truth that all language is ostensibly made to convey? Or perhaps it hearkens back to the days of old, when mere syllables were magic, and words of power could keep wayward angels of death at bay. Well, whatever the reason is, it's time to tap into that primal wellspring of linguistic satisfaction with 8-Bit Rocket's latest project, Palindromes Plus.

You are presented with a series of letter tiles, scrambled into gibberish. Your job is to click on two tiles to swap them, hopefully coming closer to the word concealed in the jumble. Once your word has been reorganized, you'll be moved right along to the next without delay. There's a clock running to keep you nervous in increments of 10 words a level, at which point the game will tally your score and tack on any leftover time to next round's clock.

At first, most of the words will induce some eye-rolling, as you'll get "ott" and have a hint of "a small child". However, you'll be thankful that you deposited all that bonus time in the bank before long, because the words start to get pretty darn esoteric pretty darn fast. Remember, the English language isn't renowned for being particularly palindromic, which means the game starts flipping open other languages' dictionaries to find some truly heinous fare. You'll be guessing at months on Babylonian calendars, alternate spellings of kayak, and other topsy-turvy harbingers of the palindrome gods. Thankfully, you'll always know that the first and last letters have to be the same ('tis the nature of the beast), but even that trick's usefulness wears off in the higher levels.

The game is a forgiving master, and running out of time at a later level means you can restart the challenge on that level from the main menu whenever you regain your anagrammatical sensibilities. With the checkpoint system in place and overtime flowing from one level to the next, this game becomes less of a trial-and-error-fest and more of a serious puzzler, where there's not too much pressure other than your own semantic curiosity. For a word-wrangler like myself, this is a welcome change of pace in a genre that seems more and more like it wants us to sink our teeth into our nails instead of our letters.

This is a great addition to any linguophile's list of browser Favorites, even if we're not sure about the answers to those big, scary questions, or why we even enjoy these kinds of games. I've always theorized that there's an impulse, an insatiable drive to fashion order out of chaos, to piece together meaning from the fragmented nothings. But there are anthropologists to answer questions like that. I don't know about you guys, but I've got palindromes to solve.

Once you get to the later levels, it simply becomes a game of how quickly you can click the letters to switch them into the correct order. I tend to consider myself proficient with a trackpad, but I'm simply too slow to get past level 7, even though the answers are all obvious.

I'd consider playing this more if it featured a Text Twist-style keyboard input.

The simple nature of the fact that they're palindromes means that for most of them you don't pay attention to the hint at all and have no idea what you're spelling. This doesn't encourage the learning of new words at all, and even the hard ones are often con answers. "Yap pay"? GET OUT.

I also kinda hate myself for already knowing "reifier."

I was worried about this game when the repeats started already in the second round.

The idea is nice, but the timer kills all the fun in the game. There's not enough time to read the hints, nor there is to think about the word. Most of the time, it's just a matter of looking for the letter that appears an odd number of times and force your way through the rest of the stage until you find the right combination. This may seem exagerated if you are at the first levels, but later in the game it's nearly impossible to pass two rounds in a row if you've lost at least once before. And that's a pity, because it starts to get really fun once phrases get thrown into the mix (like "top spot").

All in all, a fun game, but unfairly tough. I'd love to see new modes added in if they ever make a sequel. (Modes like "Survival", "Free Play", "Puzzle" etc.)

Half the time, I didn't even look at the hint; I just guessed based on the letters.

I lost when I encountered a word with the hint: some

Fun at first, but I wasn't inspired to keep playing.

2600 points on the first go, and I lost to "some" and aassppzz too. *still puzzling over that one* zaps spaz?

I got to L7 on first try. I was set back by Flash lagging, but it also helped in that if the timer never notices that it hits 0, it goes into the negatives, so that was helpful for level 6 (when I had done 4 by the time the timer ran out - I blame lag).

aassppzz baffled me too. By trial and error within the game I got it:

"zaps spaz" is correct. Can't say I understand it.

Hmm. I have tried this twice now.

On the clue for "germanic word for rich" or something similar, the game accepts both "otto" and "toot". The same goes for whatever clue seems to go with "toot" as the correct answer (I don't feel like replaying and seeing again at the moment).

I don't know if that counts as a glitch or just that the game is programmed to accept certain palindromes despite the hints.

As with the other comments, the game seems a little buggy or strange. The answer for "aassppzz" is pretty... incomprehensible to me as well. I want to play it to figure out the rest of the palindromes, but the timer is a detriment to my enjoyment of the game there.

rise to vote, sir.
do geese see god?
"do nine men interpret?" "nine men," i nod.
rats live on no evil star.
won't lovers revolt, now?
race fast, safe car.
pa's a sap.
ma is as selfless as i am.
may a moody baby doom a yam?

ah, satan sees natasha.
no devil lived on.
lonely tylenol
not a banana, baton.
no "x" in nixon
oh stone, be not so
o geronimo, no minor ego.
"naomi," i moan.
a toyota's a toyota.
a dog. a panic in a pagoda.

oh no, don ho!
nurse, i spy gypsies, run!
senile felines
now i see bees, i won!
ufo tofu
we panic in a pew.
oozy rat in a sanitary zoo
god! a red nugget! a fat egg under a dog!
go hang a salami! i'm a lasagna hog!

I'm waaay to lazy to keep trying lol, only got to level 2, my brain sucks at thinking fast xP