They say an artist puts their soul into their works of art. Apparently, it also happens when restoring paintings too; quite literally in the case of Painted Hearts, a free indie RPG. A young acolyte named Corbin, who is training to be a Pictomancer, is called in to restore a very historical painting, but it's not the paint cracking or fading on this piece that's the problem. Pestilence, a strange mysterious monster, is actively destroying the grand image and Corbin must stop it before the prominent picture is lost forever. It is not an easy journey to take, especially for such a young boy still in training, but with the help of his own creations they will fight through till the end and destroy the Pestilence before it conquers them. With stunning artwork, fantastic vocals, and a unique fighting system that is a puzzle in itself, this is one game you're going to want to see through to the end. And did I mention it's free? Because it's totally free. 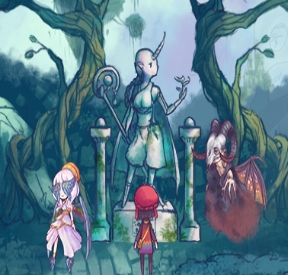 Painted Heart is beautiful. The aesthetics in this game alone will win you over, but like a party bus with no brakes, the awesomeness doesn't stop there. Most RPG battles can be won with a bit of button mashing; selecting the same powerful move over and over again. Painted Heart did away with that mind-numbing simplicity with a slightly complicated system of elements. Every attack has a element (Mind, Body, Spirit, Astral, or Phantasm) attached to it. Though you have two fighting units, their attacks are chosen together and you must find the best element combination, because the element you use to attack with is also the one they defend with. Fights become more puzzle-like with a heavy amount of strategy. The only frustrating part of this is that they show you the chart that explains the weaknesses and strengths only once in the beginning, and to see it again you have to go through conversations with the three characters. There is no guarantee when it will pop up. So get a pad and pencil or get ready to screen shot it because you are going to really need the chart as a reference. 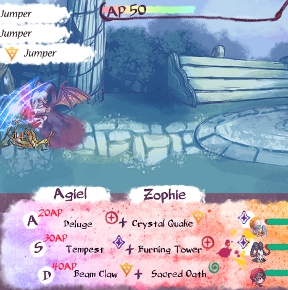 The "conversations" serve another use other than character bonding through dialogue that occasionally feels a little forced or comes off slightly campy. However, these additional dialogues help further explain the plot and are also how you unlock new moves for your characters. This can either be seen as a creative way to do it, or a mark of frustration, as you have to remember to go into your menu and select "talk" when you have some down time. In addition, there are also mini-quests to go on that, if completed, will grant more powers to Corbin. There is nothing in the game that mentions this and perhaps they wanted it to be a little reward for those who really get involved in the game (whoops I guess I spilled the beans). In fact, besides a quick little layout of the keyboard keys you use to play, you're on your own. There are a few actual puzzles in the game, and no hand holding for any of them. You may grind your teeth a bit when you get to the switches, but, with some good old fashion perseverance, and maybe a bit of guessing, you'll find your way through. Even with the vexing puzzles, Painted Heart is still a solid RPG for a short little game, you'll probably finish in under two hours, but it will be an awesome two hours of your day.

No amount of good artwork can make up for a completely incomprehensible battle system, and/or a failure to build up to a higher level of complexity.

No need to take a screenshot. There's a .png file of the chart included in the download.

It was a wonderful game, I enjoyed the dialogue, the art, the cute story, and oddly enough the battle system too. I will have to stop being chicken and try it again without the casual difficulty. It really helped me to have the window with the element chart sitting next to my game window.

I forgot to mention, the element chart image is contained in the game folder right next to the game starting icon. It's handy.

I'm stuck in the third section (with the rope bridges), I don't know what to do next.

I gave two items to the golum statue and painted that area.
I went to next section and saw a dialogue about the bridge being broken so maybe I can climb down it. I can't interact with anything, except for a box of 'charms'.
What do I do now?

Kathleen,
I got stuck there too.

If you remember the cutscene where they both jump down the mountain side, after making the comment about climbing down, there is a little spot on the ledge that looks like a chunk is missing. If you stand there and hit [z] or your main action button, Corbin should jump down with them.

make sure you get the charms, then walk to the very right, in front of the guy talks BG about chocolate. There is a ladder there. Climb up, all the way up, until all three charms are posted. Hope this helped :)