Paint it Back is a picross game from Casual Labs that aims for ease of use and an attractive presentation. It scores well on both of these fronts, toning down the difficulty just a touch in favor of inviting new players into the world of nonograms. Expect lots of crazy paintings, a handful of achievements, and many hours of staring at the screen wondering which block to fill next. 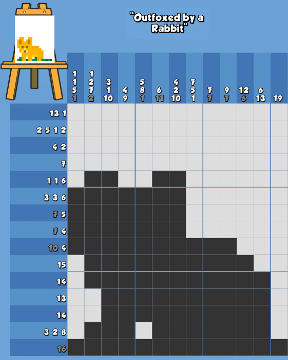 If you're new to picross, the basics are really easy to pick up. Similar to sudoku in some ways, these logic puzzles combine clues with a grid of squares, each of which can be filled or marked out with a quick tap on the screen. The numbers at the top and left sides of the grid indicate the number of blocks that need to be filled. What they don't tell you is how many empty spaces there are between the filled blocks. For example, if a row says "3 1 2", you know you'll fill a group of three blocks in a row, a single block, and two blocks. At least one space must go between each group, and by using logic you can gradually narrow down the possibilities until a picture emerges.

The story in Paint it Back involves a ghost scaring away the beautiful images hanging in a gallery. It's your job to repaint them to restore their former glory. Fortunately, a masterpiece is only a grid away! The controls are as easy as tapping squares to fill or mark them as "do not fill". Switch between paint styles at the bottom of the screen. You aren't penalized for incorrectly painted squares, so take your time and don't make wild guesses. This is a game of logic, even when you're puzzling away on a 30x30 portrait that's split between zoomable sections of screen.

Paint it Back is a free download that features a small chunk of the game's full set of puzzles. The full version contains 140 paintings spread across more than a dozen rooms. You can nab them all for a single IAP or buy them piecemeal. Either way, it's one of the few picross games on the mobile market that's actually worth your time and mental energy. Grab it and get to solving!

I really liked this, it's fun and it looks good. Shame there aren't more free levels to start with. But I think it is good enough to convince real fans of this type of puzzle to buy it.