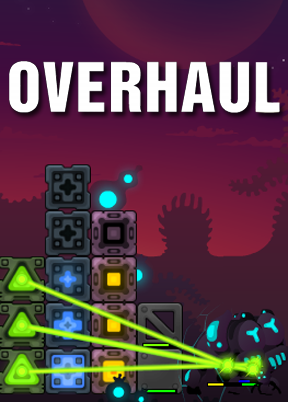 Tower defense games are everywhere these days. It's enough to make you wish you could turn that rickety old stapler in front of your desk into a snazzy Gauss rifle and blast away all the junk and get right to the good stuff. Well, Ed 'Ryzed' Ryzhov and Konstantin Groshkov have just what you need, the aptly named Overhaul, a slick new hybrid that mixes up match-3 and tower defense to blast away your workaday blues.

In Overhaul, what should be a routine mining operation on a newly discovered planet goes awry when the local populace, a mix of insectoids and robots decide its time for you to hit the road. Your mothership in orbit drops down modules to help protect your mining vessel. But before they can be activated, three of the same have to be matched in rows to create a level one module, combining three first levels to get a level two, and so on. You better have a good memory, however, as the abilities of the different blocks takes awhile to get down and the labeling of the modules isn't always intuitive.

Still, the backdrops, animations, and SFX are just right and it can be really satisfying to see your fully upgraded lasers drilling down to the core of the invading bugs and bots. Even the atmospheric soundtrack by THESANDS does its job, giving you something to bounce to between enemy waves, and heightening the tension when the battle is on. Overhaul is firing on all cylinders, as will you long after this turbocharged defense game is over.

Don't feel bad, I died at lv3. The games mechanic is tricky. Any time you put wall or anything down to upgrade you have to realize that your trading 3 for 1. It may be stronger, but you have less to protect you. It is also annoying you have to active them with 3 of a kind, but I guess it would be too simple if you can cover the area with cubes. Also some of the defenses seem meh in range. I don't know if the flying bugs goo up your defenses for a second or two, but even with air support they are still annoying being so high.

It's an interesting concept. But the more modules you discover, the more difficult it becomes by sheer dint of the dilution of incoming tiles. This is particularly bad given that you have to match three just to get one minimum level turret. This could be mitigated by upgrades if the upgrades affected dropped tiles the same way the upgrade is visually represented - thus starting tiles would be at the level you've upgraded them to.

The range on many of the turrets seems insufficient, particularly given how easily they're destroyed.

A couple of things that I found helpful...

1) Use the Freeze a lot, and upgrade it to cut the recharge time. If you keep your fingers on 1-2-3-4 it can get really easy to cue and fire the Freeze on an incoming crowd.

2) Put walls in front with healers behind them. Later, when there are a bazillion types and it gets hairy, upgrade the Move so you can bring the combos together more quickly.

Haven't had much use for that tiny missile special attack, but maybe I haven't got far enough yet.

Ugh, these guys just got too clever with. It's fun until level 3. At that point I completely ground my molars into dust.

Ehhh..this got boring pretty quick for me. Really, all you have to do is

make a single stack for each type of tower, dump the towers in as quickly as possible (to the point where you actually have to wait for them to refresh), and be sure to spam the freeze and, when you get it, shield abilities.

I didn't like not being able to see the enemies my towers were attacking; a widening of the screen's view would seriously help out here, even if the player can't build in the added space. And there wasn't really any sense of planning for anything at all; without the ability to actually decide what towers you want more of, or when you want more towers, and without the ability to know what sort of enemies are coming next, there just isn't much strategy to it.

This would have been a great game if my mine units did not suddenly stop working around level 3 or so. I kept getting mine units to drop, but they would never throw out mines. Might be an bug with the upgrade, since I had upgraded them to level 3.

Tenzhi's comment is almost what I was going to post; I was also going to complain that there is no way to see the turret range, but there is (hover over and click "?") - it just seems inaccurate. I checked the stats and started putting the longer ranged turrets in the back and trusted them to do their work.

Oh, and did anyone know you can pull turret blocks out of the queue instead of using what's next by clicking on it? Not mentioned in the demo!
When you earn Rocket Swarm, be warned that it only works on ground enemies.

I've also discovered any level with waves from both sides is incredibly difficult - there's no way to see what is coming, as your blocks more than fill both sides, so you can't use your hotkey abilities. They are beatable, though! My suggestion is to divide the plasma and laser turrets, and the anti-air and mine turrets. The P&L do the same thing, and the AA&M have a long enough range to cover the board (when upgraded).

Xindaris has a point with the view, if you could zoom in/out with the scroll wheel it would help greatly.

...and J, I had that bug where my Miner turrets have stopped laying mines, but reloading fixed it.

Reloading fixed the mine glitch for me as well, but even after that any time I either upgrade the mines to level 3 (using stars) or actually build a level 3 mine layer during play it will stop working again.

If you can get a 4 combo, the block type becomes shiny; I don't know if that means anything special. You can still use it as part of a regular 3 combo, but it would be a waste of a block.

I do know that if you get a 5 combo, the block upgrades twice. Instead of taking 9 blocks to upgrade twice, you can do it with only 5, for 44% savings. The obvious downside is that you're limited in the # of columns, so I only do this with the wall blocks if there is ample space.

There are too many upgrade tiers, and it gets very $ very fast (literally exponential). Given the limited time, the best I can do is dump blocks as fast I can.

Anybody beaten the Abnormal Zone?
The initial wave of kamikaze jellyfish is just devastating, even when putting all my direct-attack blocks on that side (and who knows how I would survive the next wave, with none on the left?)

"Anybody beaten the Abnormal Zone?"

In general, for the levels that have waves coming from both sides, build on the side the attack is coming from next, especially for the first few waves. You'll have a chance to build on the other side before the next wave.

Also in general, try to get blocks with appropriate attacks up and running as quickly as possible; you can click the blocks in the queue to drop them out of order. The Anti-air, Gauss and Factory blocks are the best for the areal enemies. Pay attention to the range of the different block types; low-level blocks have fairly short range, so plan ahead on where you will place them.

For the Abnormal Zone, once the floating blobs show up, use your Freeze, Rocket Storm and Ray Of Death abilities to thin them out while using Shield and Heal to protect your blocks. With the Shield emplaced, the green blobs (sliming) aren't a big deal, but the red blobs (bombs) can blow up a low-level block in one hit, so concentrate your abilities on getting rid of those and let your blocks deal with the green ones.

any help with level 5 pleeease? this is the aluminium deposits one, 8 waves, the first level with a double sided attack, i'm prioritizing my blocks, using good strategy although i really didn't know freeze would be this important so i didn't give it many stars i put them mostly into my repair and wall blocks should i start over n make sure i've maxed out my freeze function by this level?

anyhow im repairing wall blocks getting everything down fast as i can i just get utterly crushed when about 3 flying things and a dozen robots turn up around wave 5 and just plow through what worked great as a solid defense and attack structure before, theres just too many!i feel like i would need a few rows of high level anti air and green laser guns guarded by a lot of very good walls to stand a vague chance it seems inappropriately large for the equipment i have at the moment! any help please?

A tip for using the 5 combo, If you make a 5 combo using level 2 units they immediately become a single level 4 which has an incredible range and destructive capability.

The 4 combo gives you a full shield on that 1 level upgraded unit, even if you have not yet unlocked that ability. In my experience, it is a waste of a block and more economical to create a 5 combo to give yourself a 2 level upgrade.